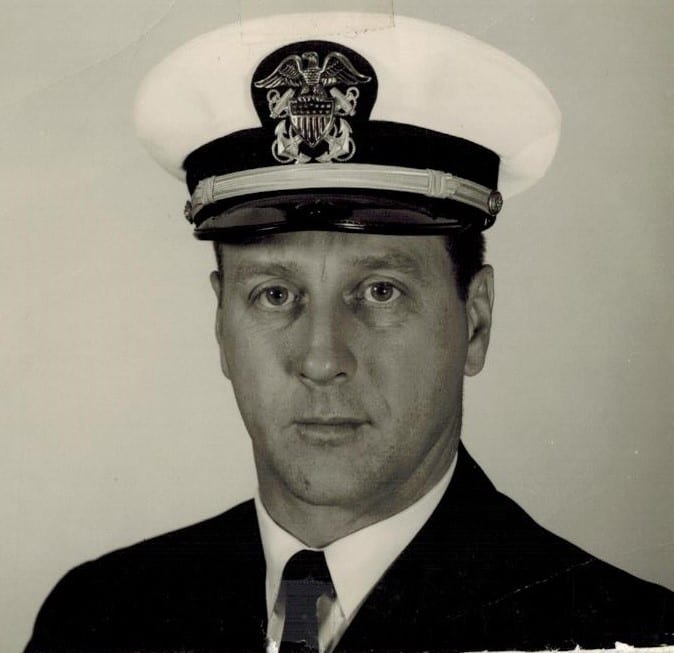 On Monday, September 30, 2019, LCDR Cameron A. Pundt, Navy (Ret.) passed away at the age of 89.
Cam was born on September 19, 1930 in Rochester, NY, son of Arthur and Edna Pundt. His dream was to become a pilot and at 18 he joined the Navy. After serving as an enlisted man, he was accepted into officer candidate school and flight training. Cam served his country proudly for 28 years as a carrier pilot. His leadership ability and comaraderie with his crew resulted in the admiration and devotion of his men. All that knew him have heard his many entertaining stories and shenanigans related to his Naval career.
Cam loved his friends and family. If you became his friend, you were his friend for life. He especially loved his coffee “klatche” in Broken Arrow and going to dinner and shows. He always had a tale to tell and loved to laugh.
He was preceded in death by his wife, Shirley Pundt and survived by Brian Root (Rita), whom he loved as a brother, four children, Wes Robinson (Sherry), Pamela Pundt Aldrich (John), Dona Galloway, and Lisa Pundt Hendrix (James). Cam was proud of his grandchildren Shannon Bisel, Blake Graham, Jesse Galloway, Neal Galloway, Dru Galloway and five great grandchildren.
Cam will be interred at Ft. Gibson National Cemetery in Oklahoma with his wife Shirley.
We love you Dad . . . .
Blue Skies and Tail Winds

Uncle Cam was so full of life. I always enjoyed when he and Aunt Shirley would visit.
He will be missed. RIP.

Cam was a wonderful client and a friend. He always came in with very helpful information to me, and I miss seeing him. He was a genuine bright spot in my life.

Cam was such a wonderful person. My husband (Bob Brinkmeier) and he bonded as soon as they met at the coffee group. We both thought the world of Cam. He was so good to our grandson, Bishop. He will missed so much. My prayers go out to the family during this difficult time.