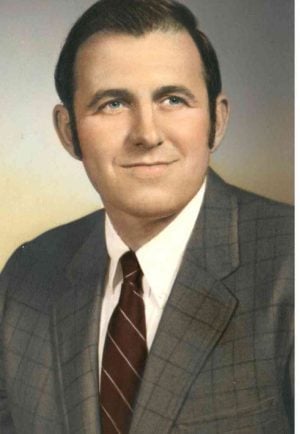 VIRGINIA BEACH- Laurence ”Terrie” Alexander, 86, passed away peacefully on March 4, 2022, surrounded by his adoring family.
Terrie grew up in Norfolk, Virginia, where as a child, he met the little girl who would become his wife many years later. He was also blessed to have developed friendships at a young age that remained strong throughout his life.
After high school, Terrie served in the U.S. Army National Guard, where he learned Telephone Cable Splicing. This skill led to a 30 year career with C & P Telephone Company (now Verizon) from which he retired in 1987.
Terrie was fortunate to have enjoyed a fulfilling second career at Waterway Surveys & Engineering, where he worked (and had fun) with some truly wonderful people, for 18 years.
After his second retirement, Terrie moved permanently to Sandbridge, where if he didn’t have his own project going on, he would help his neighbors who did. This brought him great joy.
From carpentry and plumbing to skinned knees and broken hearts, the man who became known to many as ”T-Pop” could fix ANYTHING!
Terrie was a friend to all who knew him, and a hero to his family. By all accounts, he was a really great guy.
His memory will be kept alive by Joanie, his wife of 65 years; his daughter, Laurie; his grandchildren, Leanna & Mark Johnson and Shawn & Julia Reap; his great-grandchildren, Evalyn, Natalie and Thomas; plus too many friends to name. You know who you are, and he loved you all!
Visitation will be held on Thursday, March 10, 2022, at Altmeyer Funeral Home, located at 5033 Rouse Drive in Virginia Beach, from 6:00 to 9:00 P.M.
To honor Terrie’s wishes, there will be a private burial.
He was never one to want a lot of attention, but Terrie had grown to accept the fact that his family and friends were occasionally going to shower him with it anyway. Therefore, a gathering to celebrate his wonderful life will be planned for a later date.
In lieu of flowers (and to prevent his daughter from adopting more cats) Terrie requested that any memorial donations be made to Hope for Life Rescue, in Virginia Beach, VA.

Joanie – thank you for calling me today. I loved my cousin Terrie like a brother. We grew up very close with MamaParker always there for family dinners, trips to City Park & crabbing along the Colonial Place bulkhead, just to name a few! They were such simple & fun days! Then when we were teens Terrie worked at my Dad’s Diamond Springs station & spent hours with my Dad learning mechanical stuff. He had a Jeep & gave my friends & me rides on the sand at the beach. I also remember when he met the love of his life, you Joanie, when you were teens & your very special wedding in, I think 1957?
My Mother had let me know all about what you were doing over the years. I’m so glad we got to see on those family trips to Sandbridge.
Terrie was so very special to me.
Love & hugs to you & Laurie, Paddy

Terrie and Joan have been such a long standing presence in my life that it is hard to accept Terrie’s death. What a great example of a loving couple. It grieves my heart that Terrie is gone. From back in the late 1970s on through now, I interacted with them professionally and as a friend. And in turn I came to know Laurie and Leanna and Mark. Terrie was generous of spirit, and had a discerning and inquisitive mind, often engaging me with questions or problems for us to both puzzle through. I enjoyed the friendship and was always glad to see him, often with Joanie. From his time with C & P Telephone, on through his second career with Waterway Surveys & Engineering to his retirement we stayed in touch and shared laughs over the inanities of life. The gathering of so many people from Terrie’s life at the visitation and the stories and the video of photos all attest to Terrie’s impact on so many of us. I am humbled to be among Terrie’s friends.

To Joan and family, we are sending you our condolences and memories of
years past. The Norview Class of 1955

We became neighbors of Terrie and Joanie in August of 1977 when we moved to Sandbridge. We were aware of his kindness right away. Willing to help us with any project we started. With Terrie’s vast knowledge gained from working at C & P Telephone Co. he taught me how to approach a new project. We worked well together. He would know what I was thinking or needed for a project without saying anything. A blessed man who is with God now. We can’t look out our window now without seeing him working or fixing something. We will miss his friendship dearly and he will live in our hearts forever.
Morris and Linda McKinney

The world has lost an incredible life. I personally have lost a dear friend. We send our sincere condolences, sympathies, and love to Joanie, Laurie, and Family.

Terrie excelled in many diverse interests that he pursued. He was kind and always willing to help with his many talents. Almost 50 years ago Terrie did the electrical wiring for my new porch and deck. Outstanding workmanship, no charge and lots of laughs That’s Terrie. Terrie and Joanie were a great combo. My family enjoyed many special occasions at their home or just eating steamed crabs watching beautiful sunsets at the then summer cottage at Sandbridge. I am blessed to have been friends with Terrie and family for most of my life.

May your memories of Laurance Alexander, give you peace, comfort and strength…