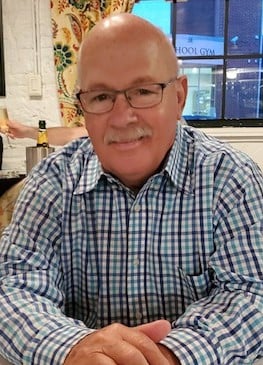 Larry Rush, 71, joined his Heavenly family on Tuesday, June 1, 2022 in Virginia Beach, VA while surrounded by his wife and children.

Born February 8, 1951 a son of the late Sheldon and Norma Rush of Levittown, PA, he was also preceded in death by his brothers, Sheldon and Doug Rush; special cousin, Lisa Marcella and her parents, Elmer and Jean Rush; as well as “his girls”, Miss Mollie and Holly.

After graduation from  Neshaminy High School in Penndel, PA, Larry joined the United States Marine Corps where he served proudly and honorably and lived by the mantra, “Once a Marine, Always a Marine, Semper Fi, OORAH!”.  He then followed in his father’s footsteps beginning his career with General Motors Corp until retirement.  Larry was very active in his churches as a board member and a volunteer.  He was co-president of the Hedgesville Athletic Boosters, a member of the American Legion, Vietnam Veterans, Mercer County, NJ and the United Auto Workers Union.

Given Larry’s love for life, beautiful smile and his “gift of gab”, there wasn’t anywhere he went that he didn’t make lasting friendships and touch the hearts of others.  In addition to his daily trips to the dog park with Lexi and to the gym, he loved Philadelphia sports, college football and golf.  But most of all, he loved and cherished his children and grandchildren.

Larry met the true love of his life, Debbie at Deborah Heart & Lung Center.  After a relentless pursuit, she finally accepted his dinner invitation.  Larry never followed up.  Then he received her Christmas card with “P.S. Dinner was great…” included and it was finally the beginning of an amazing future together, married 38 years, June 2, 2022.

Family was everything to Larry.  In addition to his children, left to cherish his memories, antics, crazy jokes and love are his grandchildren, Christopher, Trevor, Gavin, Alex, Bella, Brooklyn, Brody, Braxton, Caden and Ciara.  Also surviving are his brother, Bruce Rush (Sharon) of Martinsburg, WV; his sister, Norma Coverdale (Jim) of Levittown, PA; several nieces, nephews and cousins.  Special thanks to Dog Park Joe and crew for becoming the best of friends these past years.

A celebration of Larry’s life will be held at 5pm Friday, June 17, 2022 at Altmeyer Funeral Home, 5033 Rouse Dr., Virginia Beach.  A reception will follow this service.  The family will begin receiving friends at 4pm.

Memorial contributions may be made in his honor to either the Hope for Life Rescue, 610 Jack Rabbit Rd., Virginia Beach, VA 23451 or to Deborah Heart and Lung Center, 200 Trenton Rd., Browns Mills, NJ 08015.

Larry was the first person I met at the dog park. He introduced me to all the dogs by name and brought me up to speed on all the “goings on”. I looked forward to seeing him and Lexi every Saturday. He will be greatly missed and fondly remembered.

Bill and I both were shocked to hear of Larry’s passing. His smile and always knowing everyone. His love for the family, spoiling the grand babies. I miss you so and think of you so much my love and prayers are with you. Love to you.

Larry was one of my favorite cousins and always dropped me a line or two on Facebook and Messenger. It was so special when he and his family visited us in Massachusetts and we also met in Bordentown NJ for dinner with my mom. Not enough time together! We love you, Larry. RIP dear cousin! xxoo-Patti, Plato, Matt, Josh and Jess Adams

Jen and family, May the beautiful memories of your special Dad bring you peace and strength. Prayers for Gods blessings always.

Debbie, Billy, Matt, Jen and families. May Larry’s memory be a blessing.