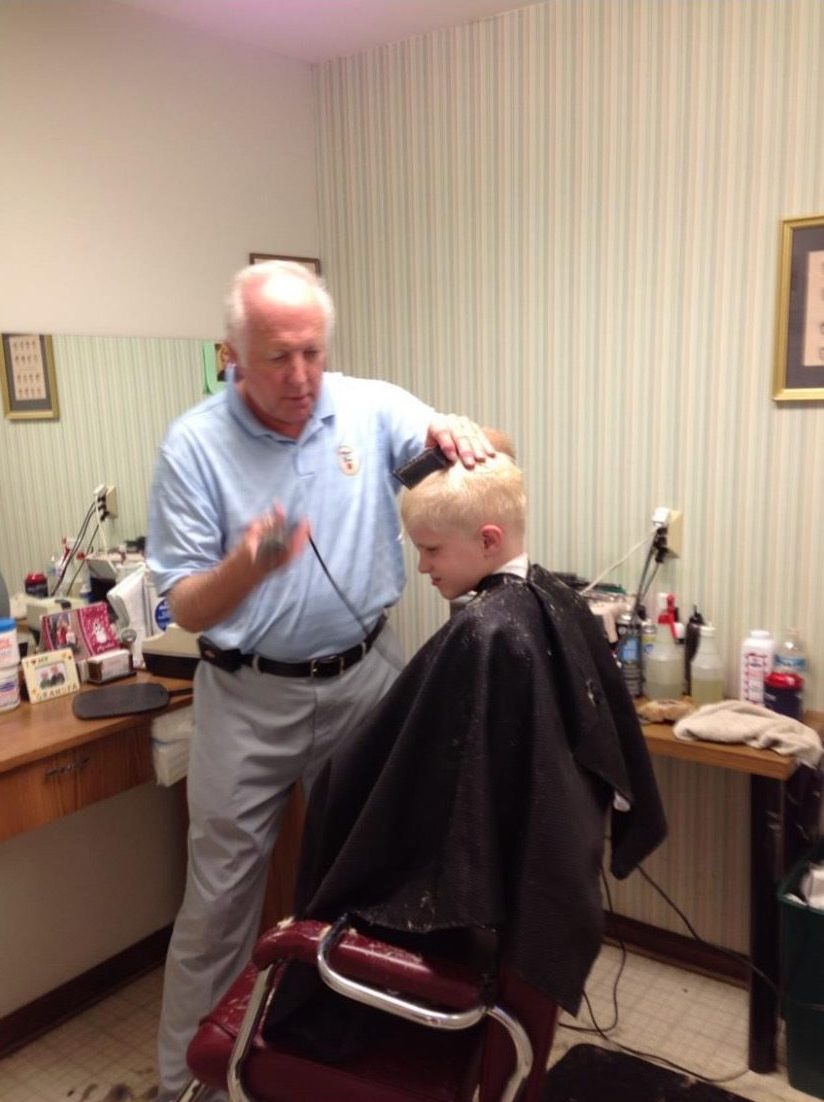 Denbigh’s beloved barber, Kent Gary Smith, 77, lost his battle with cancer on October 12, 2021 with his family by his side.  He was born in Mississippi to Alfred J. and Arlene I. Smith.  He was preceded in death by his father, Alfred J. Smith.  He is survived by his wife of 51 years, Diana W. Smith of Newport News, his mother Arlene I. Smith of Newport News, 2 children Kelly G. Smith of Mechanicsville, VA and Scott A. Smith of Kill Devil Hills, NC, 2 grandsons Landon and Lachlan Fender of Mechanicsville, and 1 grand dog, Fin Smith of Kill Devil Hills.
As a child, Kent lived in several different states while his father served in the Air Force.  After his father retired, his family settled on the Peninsula where Kent met Diana in 1966 at Sherwood Shopping Center where they both worked.  Kent began his barbering career of 56 years at Sherwood Barber Shop on May 5, 1965.  He eventually bought the barber shop from George Grissom when George retired.  In 1985 Kent built his building across from Sherwood Shopping Center where he established Hairsmiths and he continued his legacy until May 2021.
Over the 56 years of Kent’s career, his many generations of customers became like family to him.  He was always as devoted to his customers as they were to him.  He had many customers who had their first haircuts as well as their wedding cuts and then brought their children to him for their haircuts.  He was always happy to go the homes of his customers who were confined by illness to cut their hair and cheer them up with the corniest jokes ever.  Many of Kent’s first customers stayed with him from the beginning until the end of his career.  Kent’s family would like to thank each and every customer for their support and friendship over the years.
We would also like to thank the doctors and nurses at Hampton Sentara and Virginia Oncology Associates for the excellent care he received during his illness.  Thank you to Hospice of Virginia and Agape Home Healthcare for the loving support and care they gave to Kent and his family.  We would like to acknowledge Altmeyer Funeral Home for their outstanding professionalism, patience and kindness that they have extended to our family to help us through this painful process.  Last, but certainly not least our family would like to send a very special thank you to Tim Wojcek and his team at the Newport News Fire Station #6 who went above and beyond in helping Kent during his toughest times and responding immediately during all hours day and night. We are truly grateful.
Diana, Kelly, and Scott would like to invite all of Kent’s friends and customers to visit with us at Hairsmiths, 13784 Warwick Blvd. on November 7, 2021 from 2 pm to 5pm.  We look forward to sharing great stories with each of you.  In lieu of flowers, please make donations to THRIVE Peninsula 13195 Warwick Blvd #2c Newport News, VA 23602. Please visit altmeyerfuneralandcremation.com to leave condolences.

I am heartbroken, I cannot imagine the loss the family feels. I don’t have much to say other than Kent was an amazing man, he cut my hair for 22 years. Even when I moved to Williamsburg I still drove to Kent. Spent a lot of time talking about Scott’s new venture into the Rum world and how proud he was of all the success. Kent you were such a light of happiness and I loved my time with you. Rest In Peace and you can cut my hair when we meet again.

Diana, Scott, Kelly and extended family,
We are so sorry to read of Kent’s passing. We have only known him a short time since moving next to your home in Kill Devil Hills five years ago, but in that time we appreciated his kindness, wit, (aka corny jokes), and his devotion to his family. He was also devoted to his job and his customers. He even gave Wayne a haircut at his home here once when Wayne couldn’t get up with a barber! He was a very nice man and I know he will be missed by all who knew and loved him!

I began taking my three young sons to Kent for haircuts when I lived in Denbighshire. He always made it look so simple, that I decided to buy a hair cutting kit and save money by cutting their hair myself. I called son no 1 into the bathroom, sat him down, turned on the hair clips, touched them lightly to his head and to my hoodie, a big chunk of hair fell out. So I called son no. 2 in and tried again. Same thing happened…a large chunk fell out. Undaunted, I called in son no.3. Yep, same results. I quickly loaded the boys into the car and raced to Kent who graciously evened out and corrected all my mistakes! I quickly retired the hair cutting kit and returned to Kent’s expertise. May you rest in peace, Kent, and may your family find solace and joy in the loving memories of the many lives he touched.

Our deep condolences to Diana and the extended Smith family in the passing of Kent, a good friend and the best barber one could have. We pass through life meeting many individuals whose memory gradually fades from our minds over time. But there are a select few who forever remain in the minds eye through the reminder of a word, event or other catalyst. Kent Smith will be so remembered.

Dear Diane and Family, I have been going to Kent’s Barber shop since 1965. He was a wonderful Christian man and a joy to be around. He cut my hair, my two boys and all of the grandchildren. Since my wife has been ill and on oxygen he had been coming to our home as needed to cut her hair for her. He was in good spirits and never complained. He told everyone he would be back after his treatment, this was not Gods plan. Kent was a good friend and the best barber ever. So far I have found no one to replace him this was a great loss for all. Prayers for you and the family. God Bless all. Butch Hogge and family.

Diana, Kelly & Scott, I am so sorry to hear about Kent’s passing. He was such a kind & funny man. Even if his jokes were corny (lol). After our office (Nationwide Insurance) moved out of the building I still made an effort to drop by every time I had my chiropractor appt next door just to see him. I don’t think there was ever a day I saw him that he wasn’t smiling or telling jokes. He will be greatly missed. Your family is in my prayers.