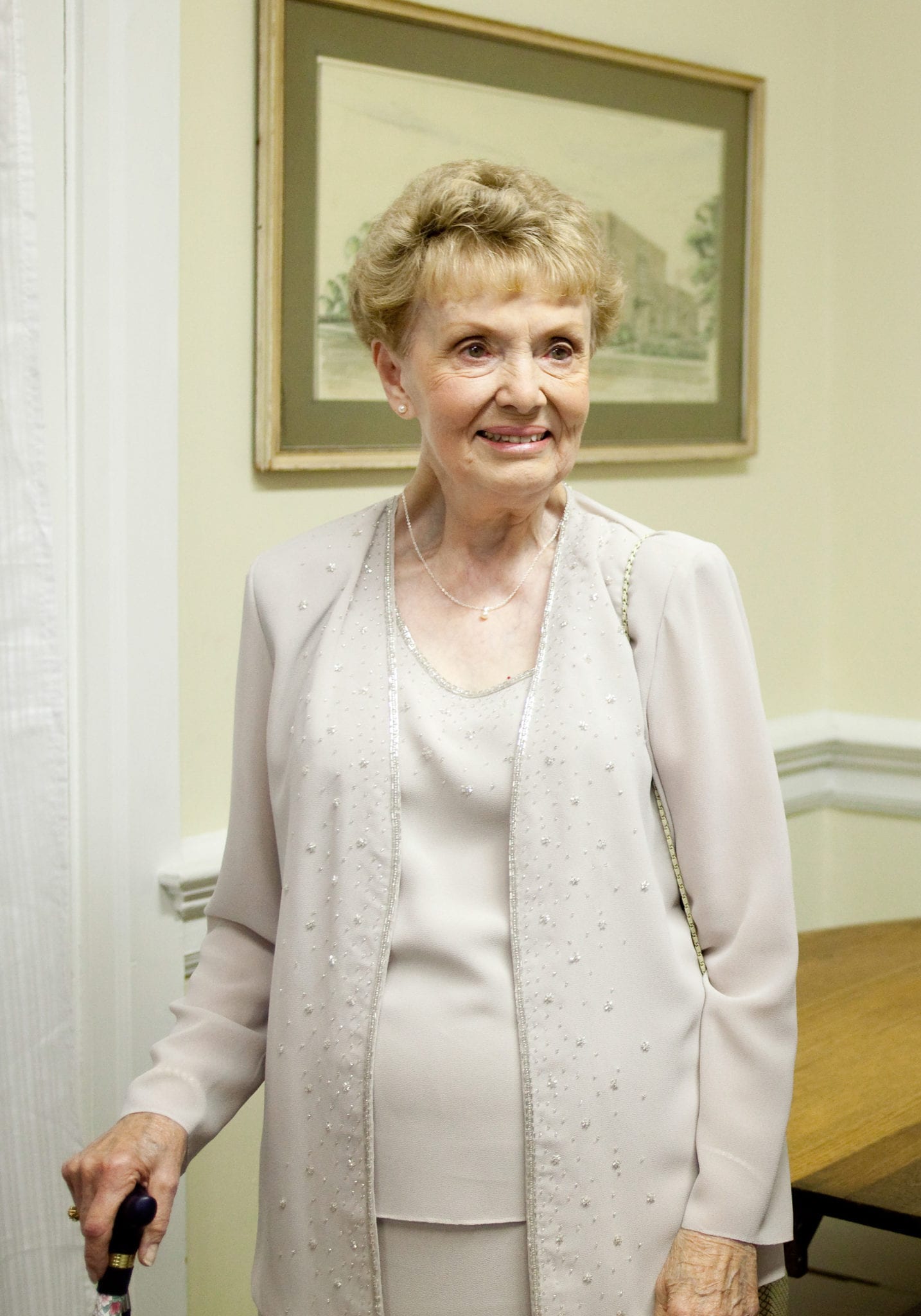 Heaven gained a beautiful angel, one that has left a huge mark on this earth.
With profound sadness, we announce the passing of Kathryn McAndrews, a loving and devoted mother, grandmother, and great-grandmother. Surrounded by her loving husband, Thomas McAndrews, and several family members, she passed away quietly on Tuesday, the 18th of August at Sentara Leigh Hospital. She was 87 years old.
Kathryn was born in Saint Joseph, Missouri in 1933, later moving with her parents, Edward and Kathryn, to Omaha, Nebraska. In 1950, while attending Mercy High School, an all-girls catholic school she was walking to the bus stop with friends when a group of boys from Creighton Presparatory, an all boys catholic school, drove by and offered the young ladies a ride. Seeing how there were no seats left in the car a handsome blue-eyed boy named Thomas did the gentlemanly thing and offered his lap to sit on. The rest, as they say, is history. They married at Holy Cross Catholic Church on the 4th of October 1952. She followed her husband through college and service in the US Army before settling in Virginia Beach in 1962. There she raised her family of eight boys, serving as a homemaker and a devout servant of Christ by participating in numerous ministries at Saint Gregory the Great Catholic Church.
She was predeceased by her parents and brother David. She is survived by her Thomas, her eight sons: Michael and wife Susan, Patrick, Terrence and wife Wanda, Lawrence and wife Doreen, Edward and wife Dianna, Timothy, Dennis, and Robert and wife Carleen. She also leaves behind her brothers Edward and Jack, and while too many to mention by name, she also leaves behind her beloved 22 grandchildren and their 13 spouses, along with 25 great-grandchildren and counting.
She was an amazing woman who will be remembered as the loving matriarch of her large family who could often be found knitting, sewing, praying, baking one of her delicious desserts, or demonstrating her impressive knowledge of the families oral history. She remained sharp as a tack until the end and could recall an impressive amount of detail about the events that shaped her life to include every date, time, height, and weight of each new baby.
Most of all, she will be remembered for the love she showed her family and the strong values instilled in her sons which served them and their children as well. She will be dearly missed and forever in our hearts.
A celebration of life will be live-streamed from Saint Gregory the Great Catholic Church on Saturday the 29th of August 2020 beginning at 1:30 P.M. Streaming will begin 5-10 minutes before mass. To view the services through the church’s live stream service please click HERE at the date and time listed. Immediately after the mass, a reception for family members will follow at the family home.
In lieu of flowers, the family asks that donations be made to either Saint Gregory the Great Catholic Church or to the Muscular Dystrophy Association.

My sincere condolences to the entire McAndrews family. Tom and Catherine were like second parents to me and she will be greatly missed by all. Her love and faith Will lead her and the Family during this very difficult time. To God be the Glory

My deepest condolences to all that knew and loved her. She was an amazing person and has left one heck of a legacy. I hope as time passes every sadness in your heart is filled with happy memories. RIP Grandma Mac ❤️

Condolences to the McAndrews family. May all your memories of your wonderful mother console your broken hearts. May God rest her soul.

I am so sorry for your loss. The entire McAndrews family is in my thoughts and prayers.

I feel blessed to have known this beautiful woman. Despite her slight stature, she “held court” with children, grandchildren and friends as if she were a head of state! Her devotion to family and God never wavered. My life has been blessed for having known her. Tom and the entire family will remain in my thoughts and prayers. I have no doubt she is looking down upon her beautiful family

I remember Mrs Mac as a beautiful lady with so much class. My thoughts and prayers go out to Mr Mac and the rest of the McAndrews family.

Our thoughts and Prayers to the McAndrews family. What a sweet adorable lady that truly raised a awesome family. May God bless you, RIP

To Tom and Family, I hardly know what to say. What a Lady. Our times together seem so few, so short and so long ago, but I remember every minute like it was yesterday. They were good times. Kathy will surely be missed and our thoughts will be with you,Tom and your wonderful family. God be with you.

I remember Tom and Katherine from back in the 60’s when Tom worked with my husband, Carl Anderson, at the Army Corps of Engineers. I remember her last 2 or 3 pregnancies. It was always “another boy”. We were both at home with little children and I remember taking on the phone regularly. She will be missed.