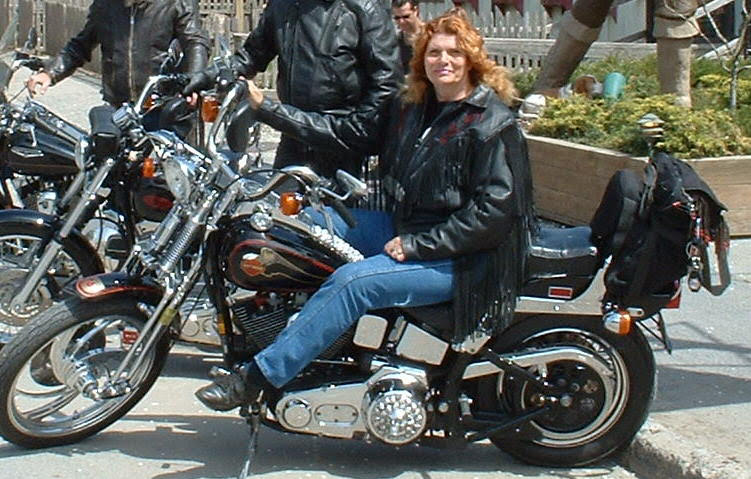 Judith Ann Gelinas, 76, of Elizaville, NY, passed away peacefully in her RV home in Virginia Beach, VA, February 13, 2022, with her husband, Bo, by her side. They were married 33 years and he was a loving caretaker to her during her courageous battle with cancer.
She was born March 19, 1945, to late parents Alfred E. and Irma M. Sergel. She was a mother and homemaker in her early years. She started a successful business, Gelinas Graphics. She had a passion for riding motorcycles, joined Harley Owners Group in 1988 and was a lifetime member. She taught many family members and friends how to ride. She enjoyed showing off the tattoos on both her middle fingers. She participated in many charity rides and poker runs. Children loved riding in her motorcycle sidecar. She was a licensed Ham radio operator. She was an avid reader and earned her GED at age 70.
She believed in living life to its fullest and was a travel enthusiast. Her wanderlust began at an early age from reading letters that her older sister, Jeanne Breden, wrote to her while traveling the world with her husband, Phil Breden Sr, during his service in the Army. She especially loved beaches. With a lifetime of exploring, the Grand Canyon was her favorite adventure.
She shared her love of gardening, raising animals, homesteading and singing with all who knew her. She touched countless lives by helping others during hard and difficult times. She believed in forgiveness.
She is predeceased by her 2 brothers, Alfred “Marty” and Gary Sergel, her sister, Jeanne Breden, and her eldest son, Kevin “Fitzi” Fitzgerald, and grandchild, Carrie Moyer. Left to cherish her memory are her husband, Daniel “Bo” Gelinas, her children and their spouses/partners, Keith Fitzgerald Sr (Julie Palmer), Frank Joel Moyer (Christina Chapin), Irma Price (Jeff Price), Jesse Moyer (Michelle Moyer), Kenneth Shrom III (Christy Shrom), Max Sergel, and daughter she had with Bo, Helen Rose Gelinas (William Boyer). Fondly known as “Meme” to her grandchildren, Tommy (Tina), Keith, Kevin, Kingsley, Madison, Jackie, Nick, Caitlyn, Kenny “KJ”, Alex and Victor. She also leaves behind many loved brother/sister in-laws, nieces, nephews, great-grandchildren and many special friends.
She gave us wonderful memories & great stories to retell. She left footprints in our hearts and will be dearly missed. A celebration of life will be held at a later date.

My Mom shared the love of sewing and gardening with me. She guided me through sewing a red prom dress with flowers of black & red. It is a memory I cherish. I will miss the sharing we had in gardening, and I will forever hear her voice in my garden and see her in every blooming flower.

Jude was an amazing woman. Always loving and always there whenever needed. She had a big heart and was always fun to be around. She will be missed by all. Rest peacefully and ride on my cousin! Love you!

My first memory of Jude. Lol.I saw this red haired woman clamoring out al a beat up old blue ford pickup. Arms full of picnic stuff. She was wearing a white T shirt , bluejeans and barefoot red nails and toes. I told my self wow that is beautiful! I want to marry her. I was 8…. I walk over to her and started talking and never stopped. From that day on I never stopped talking to her. I would miss a day or even a month. But we would start talking like we never were apart. She would check on me and I on her.