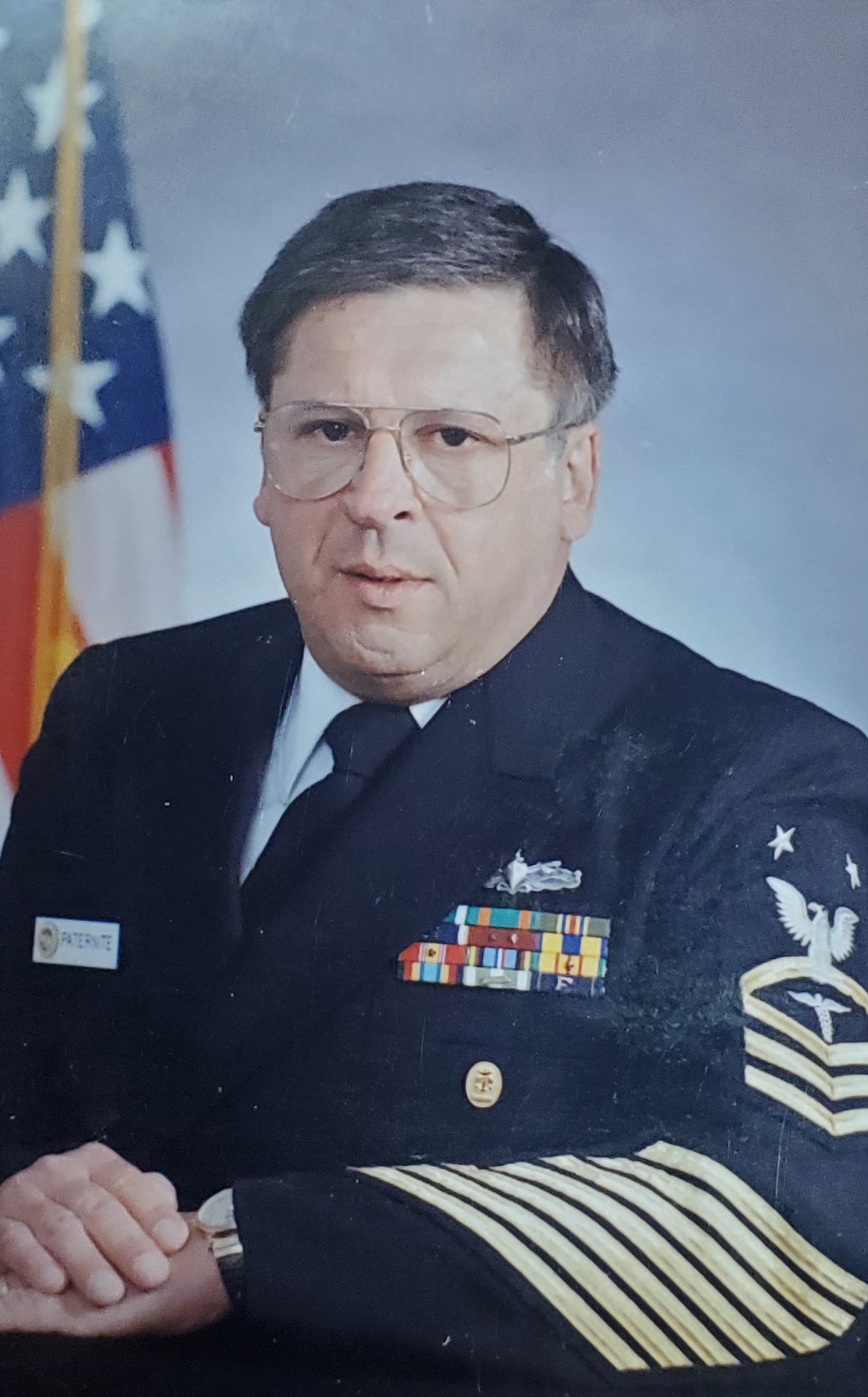 Joseph “Joe” Paul Paternite, 73, went to be with the Lord while surrounded by his loving family on February 6, 2022. Joe was born to the late Paul and Genevieve “Jean” Paternite on November 20, 1948 in Philadelphia, PA.
Joe served his country proudly for 30 years. Retiring. He entered the United States Navy right out of high school in 1968. That August, he entered Naval Training Center Great Lakes for basic training. After graduation, he attended the Hospital Corp School Great Lakes. In March 1969, he was assigned to the USS America CVN-66, based out of Norfolk, Virginia. In May 1972 in attended X-Ray Technician School and a tour until July 1977, at Patuxent River, Maryland.  Next came Advanced Hospital Corps School, Portsmouth Virginia. July 1978 – July 1981, were 2 ships out of Pearl Harbor, Hawaii.  September 1981 – 1984 transferred back to Portsmouth, Va. as an Independent Hospital Corpsman, Naval School of Health Science. August 1984- 1987 brought him to the USS Dwight D Eisenhower CVN-69. After his assignment, he went to the Bureau of Medicine and Surgery Washington, DC for the Surgeon General from September 1987 -July 1993.  In July93- August 1996 Naval Safety Center, Naval Air Station and finally Back to Portsmouth, Virginia, to the Naval Medical Center August 1996- September 1998. Joe was loved by many and will be missed deeply.

Carol, I am so sorry for your loss. You and your family are in my thoughts and prayers.

My prayers are with you and your family. May God continue to be your guiding light and provide your comfort each and every day.

Ms. Carol, I’m so sorry for your loss… my condolences to you and your family during this time. Sending you guys hugs and love 🙂

Sending nothing but prayers and love for your family Carol. We are so sorry for your loss.

Wendy and I have lived across the street from Joe and Carol for over 25 years. When our children were younger and needed to sell things to raise funds for school projects, they would always go to the Paternites’ house because Joe and Carol would kindly buy something from them. If we needed a tool or some help, I knew that Joe would always be there for us. Just a couple months ago, my son (now grown) was looking for a certain tool to fix something, and Joe took him to three different sheds in his yard to help them find just the right tool. He was that kind of neighbor. If I was working on my car or house, Joe would walk across the street – or in later years, motor over on his scooter— to give me some good, sound advice. Joe gave me a number of excellent referrals regarding finding the right professional to get a home project done correctly.
One of my favorite memories is a day when Joe was showing me some home improvements he had made in their house, and I asked him about his Navy Honor Shadow Box. He shared some great stories as he told me what everything in the box represented in terms of his service for our country. As he talked, I could sense his joy and honor in serving our country, and I was so impressed with all of his military accomplishments. Another special memory is the day he let me drive his new Corvette. What a good neighbor!
I had a chance to pray with him a number of times and he always welcomed prayer. He was a wonderful neighbor to us all and we will miss him dearly. Carol, you know we are always here for you. God bless you ~ Marty O’Rourke

To Carol and Family, we send our most sincere condolences on your loss. Joe will always be remembered for his kind nature, effervescent personality, deep camaraderie and utmost professionalism. He will be sorely missed. Mark and Kathy Salonia

Deepest condolences for your family at this time. Prayers for all of you.

May your memories of Joseph Paul Paternite, give you peace, comfort and strength…

So sorry for your family’s loss , made the Lord be with you at this hour to provide grace ,mercy, peace ,and healing.