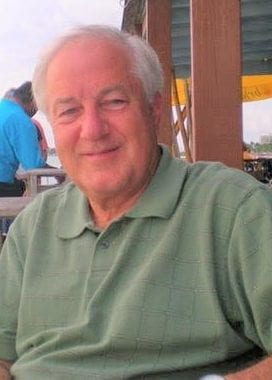 Services for Mr. Woodward will be private.

John W. Woodward, age 75, passed away on December 2, 2020 following a battle with mesothelioma. John was born on Dec. 23, 1944 in Washington DC to the late William Bryce and Anne Josephine Woodward.
John lived most of his life in Virginia Beach, graduating from Princess Anne High School in 1962.  He received Bachelors and Masters degrees in Engineering from Old Dominion University where he was a member of Tau Kappa Epsilon fraternity.  A registered professional engineer for his entire career,  John worked for 26 years for the Department of the Navy. He held numerous positions with the Naval Sea Combat Systems Engineering Station culminating in being selected as the Technical Director, the command senior civilian, in 1989. During his time with the navy, John earned one patent and was awarded the Navy Meritorious Civilian Award in 1992. His leadership helped the command to win the US Senate Productivity Award for the state of Virginia in 1993. Following his retirement from the Department of the Navy in 1994, John spent 17 more years as a Vice President with American Systems Corporation before retiring in 2012. He was an adjunct instructor in Electronics at Tidewater Community College for seven years in the 1970’s and served on the curriculum advisory council for several years thereafter.
John’s family was his passion. He was always involved in his children’s activities, including coaching various youth sports, serving as an active leader of Boy Scout troop 481 in Little Neck, and attending many campouts and summer camps.
John was an active member at the Church of Ascension Catholic Church in Virginia Beach for over 40 years.  He served in numerous ministries including Eucharistic minister, RCIA sponsor, confirmation sponsor, liturgy coordinator, parish council, chairman of the finance committee, building committee, and member of the Ascension Construction Crew. He was a long term volunteer at Kings Grant House senior care center.
John loved boating on the Lynnhaven River, taking on many home projects, traveling, and any occasion to be with his family. Things were best when he could combine his love of travel while being with his family and he made that a priority. He leaves behind many memories of family trips taken near and far.
John’s memory will live on through Francine, his wife of 52 years and the love of his life; a brother Will Woodward (Diane) of Escondido, CA; son Brant (Kim and granddaughter Caroline) of Atlanta, GA; son Steven (Anna and grandsons Jackson and Mason) of Haymarket, VA; sister-in-law Jane Taylor; brother- in-law and sister-in-law Rick and Nancy Richardson; and Nieces Sara Taylor, Natalie Vilas, Kelly Honeck, and their families.
Reverend Daniel Malingumu will celebrate a mass for the family on Dec 17 at 1:00PM, and we will gather to celebrate John’s life with friends at a later date when it is safe to do so.
In lieu of flowers, please consider donating to Church of Ascension Social Ministry, For Kids, The Virginia Beach Rescue Squad, or the charity of your choice.

Fran,
Our thoughts and prayers are with you and your family. I will always cherish the many weekends we spent at the TKE house parties. What fun we had! I still laugh at how the Bonners, John and you plus Ned , Georgie and I crowded into our 2 bedroom apartment up near Lehigh U. when you all made the trek up.
Ned and I will always remember John as the level-headed one in our group.
May His Memory Be Eternal.
Susan and Ned

TKE Parties and your visit to PA

My heart broke when I received Kathy’s Christmas letter and read about John’s passing. Please know that I send my heartfelt condolences and prayers of comfort and peace. I have such wonderful and fond memories growing up with your family at Ascension. Love to you all!

My sincere condolences to the family. John and I were coworkers during his tenure with American Systems. We both shared a love of travel so John was thrilled when I asked him to critique my trip plan to Italy. John was quite the expert since he and his wife had traveled to Italy several times. We both had a big laugh about getting a letter from Italy a year later about some infraction we had made while driving there. Although we lost touch after I retired I will always remember our talks about his family, his kind spirit and his laugh.

Fran and Family
We mourn the loss of your loving husband with whom you anchored a loving and caring family. God Bless and Love you all Gary and Joyce

Dearest Fran and family,
Our hearts are full of sadness as we mourn John’s passing. He leaves a beautiful legacy of love and kindness. Certainly, he made a difference on this earth and he will not be forgotten. Please know that we are available for anything you need. May God bless you with comfort and love.

Fran I’m so sorry about John’s passing. I know how in love you were and how much John contributed to the community. You’re in my thoughts.

Dear Fran and family, It is with much love and respect that we Menards send this message of condolence to you all. We were blessed to have John as a friend, one of our Little Neck area neighbors and a great positive influence to our sons, Jim & Joe during their growing years in BSA Scout Troop 481. He was a true living example of what young people should strive to be in life. Thank you for sharing him with us.

Dearest Fran, I am saddened to hear of John’s passing into eternal life but at the same time, assured by our shared faith that he rests now, alive and whole, in the company of our gracious Lord. May these assurances of faith bring you and your family comfort, and may your memories warm your aching hearts. In sorrow and joy, Debbie

We were so surprised to hear of John’s passing. He was always smiling and interested in all those around him. Rest in peace John