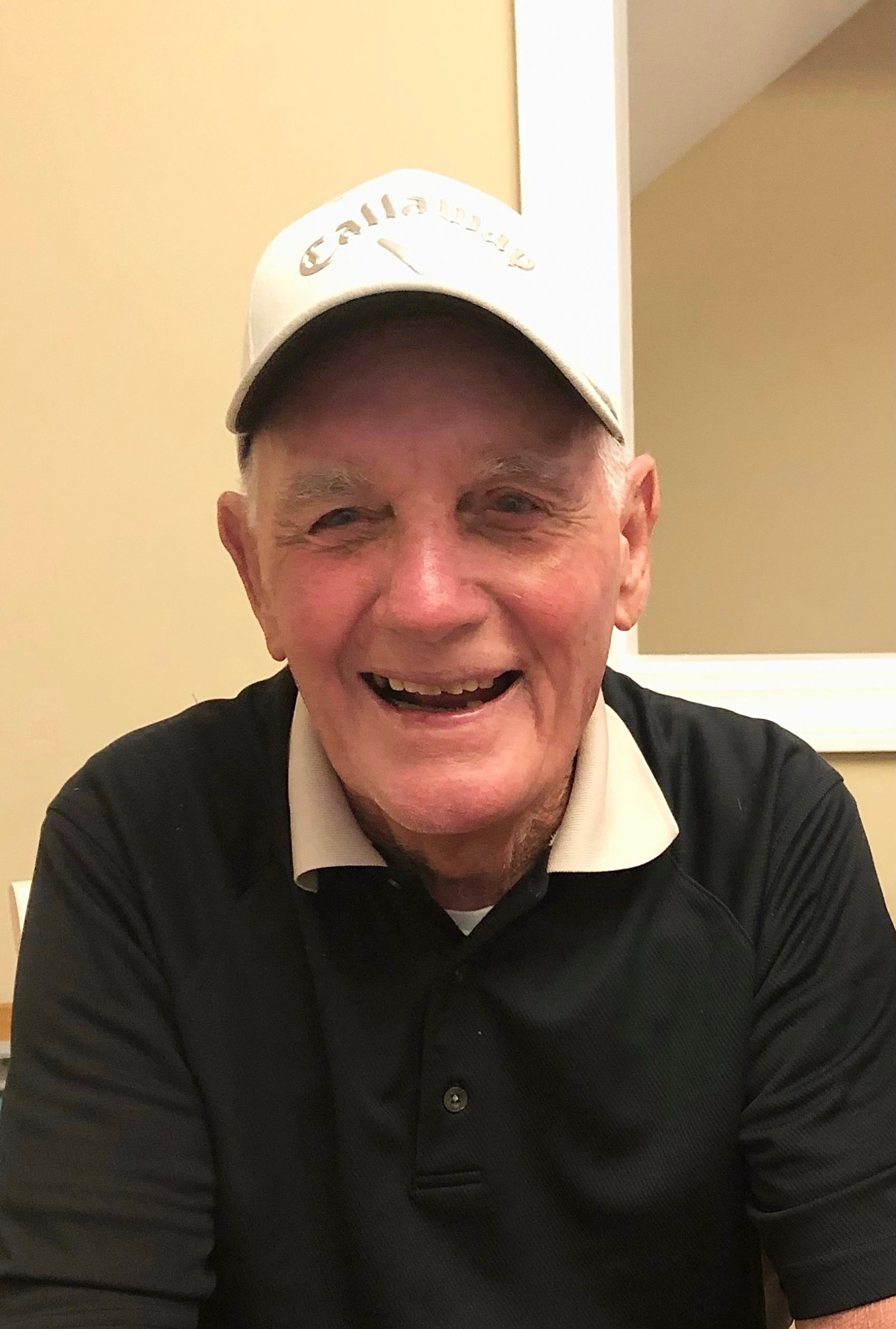 John Joseph McGraw, age 90, went to be with the Lord on Saturday February 12, 2022 in Norfolk, VA in the home where he raised his family. John was born on March 9th 1931 in West Virginia and was raised in the St. John’s Catholic Orphanage until he joined the Navy at age 17.
He met the love of his life, Joanne, in West Virginia and they were married November 22, 1955. They had five sons together, Gary, Todd, Steve, Greg, and Jeff. Those sons gave him ten grandchildren and six great grandchildren. John’s family meant everything to him. He often told people “If my life got any better, I couldn’t stand it.”
John lost his wife, Joanne, in February of 2013 and continued to love her until he took his last breath.
He proudly served his country for 20 years, retired from the Navy, and then went on to retire from the MetLife Insurance Company. In his spare time, he loved to golf with his sons and friends, spend time with his grandchildren, and chat with everyone who would listen at the Commissary. He was also a devout Catholic who attended St. Pius X Church and rarely, if ever, missed mass or an opportunity to receive communion. He considered attending church to be an honor and privilege and put nothing above God in his life. Most people would describe him as a man full of joy, who loved his family, and whose laughter was contagious. He will be missed by all those who knew and loved him.
Left to cherish his memory are his five sons, Gary, Todd, Steve, Greg and Jeff. As well as his ten grandchildren, Melissa, Nicole, Corey, Libby, Patrick, Alex, Kelsey, Adam, Roel Vergel and Joanna and his six great grandchildren Bryce, Haylei, Heidi, Lily, Caitlyn, and Arvie.
A visitation will be held in his memory from 6:00pm to 8:30 pm on Thursday February 17, 2022 at the Altmeyer Funeral Home, located at 5033 Rouse Drive in Virginia Beach, VA. A Mass of Christian burial will be held at St. Pius X Church in Norfolk, VA on Friday February 18, 2022 at 11:00 am. Afterwards, the family invites you to join them at his home for refreshments and fond memories at 4826 Dolphin Ave. Norfolk, VA 23513. John will be reunited with his wife, laid to rest at Albert G. Horton Jr. Memorial Veterans Cemetery at a later date.

I will miss him dearly…he had such a caring heart ❤ love to the whole family.

Great Dad/Grand Dad of a great family. I could always count on laughter and genuine warmth when Jack “leaned-in” to tell me “what for”. ‘Cause that’s what great ones do.

So fortunate to have this great man in my life. His devotion to his wife, my Aunt Joanne and his children and grandchildren is his greatest accomplishment. Always taking great pride and care in spending time with his loved ones, family was certainly everything to Uncle Jack. He possessed a passion for living with vigor and appreciation for the simple things. When Uncle Jack came to Huntington WV for visits, he often golfed with Trish’s dad and that would make his day. A patriot and a Godly family man sum up the person I know as Uncle Jack. He is now reunited with his beloved wife and my Mother Verna along with all his family that have gone before him. Rest in eternal peace. I thank you Uncle Jack for your service to our country

Steve,
I am so sorry for the loss of your dad. As you know I loved all of the great golf stories you had told me about. I can still picture you and him at OceanView and him bragging that he was beating you once again.
I am confident he was a great father to you and your brothers, I know he will be missed by the entire McGraw family and friends alike.
My sincere condolences to all of you and of course prayers for strength will definitely be going out each and every one of you during this most difficult time.
Sincerely,
Peter Steinlein

There are no words that can begin to capture the magnitude of your loss. I’m so sorry that you and your family are going through this. Steve I never met your father, but from the way you spoke of him, he sounded like the a great dad.

Uncle Jack was always smiling and laughing. I so enjoyed the last time I saw him at Greg and Imas.

I loved sitting on Verna’s porch listening to him tell story after story I will miss him.