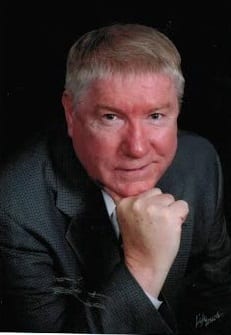 John Joseph Hale of Virginia Beach, passed into God’s presence on October 13, 2015. Born on October 15, 1948, in Portsmouth Virginia, he was the son of the late Herbert Clifton Hale, Sr. and Francis Zirkle. He was a 1968 graduate of Cradock High School.
John was also preceded in death by his sister, Mary Hale Humphries Hughes; brother, Herbert Clifton Hale, II ; and brother-in-law Abner Williams.
Left to cherish John’s memory are his beloved wife of 33 years, Emily Hudgins Hale, beloved “little buddy”, his 16 year-old cat , “Tuf”; sister Charlene Hale Williams; nephews, Cliff Queen and Billy Humphries; nieces, Margie Humphries Stevenson and Barbara Humphries Morris. He is also survived by his sister and brother-in-law, Sandra Hudgins Davis and Lawrence Davis, their son and grandchildren , Chris Davis, Steven and Stephanie Davis, and several great nieces and nephews, cousins and friends.
John was a member of First Baptist Church of Norfolk, the Winning Walk Bible Study Class, and the Young at Heart Senior Ministries group.
John last worked as a civil draftsman for the City of Norfolk, until 1998 when he suffered a severe brain hemorrhage which rendered him unable to continue to work. During these last 17 years, he continued with many medical struggles as a result of the brain hemorrhage and two years ago started having heart problems. In September, he was diagnosed with Ureteral cancer, and had surgery on October 5th. Even though John was not as active as in the past, he enjoyed being with friends and family, and always loved to reminisce of his childhood days and any trips and special times he had recently experienced.
Visitation for John will be held on Friday, October 16, 2015 at Altmeyer Funeral Home-Southside Chapel (5792 Greenwich, Virginia Beach, VA) from 6:30 to 9:00 PM . Funeral service for John will be held on Saturday, October 17 at the funeral home at 2:30. Procession to Forest Lawn Cemetery, Norfolk, to follow the funeral.
Memorial gifts in John’s name may be made to the local chapters of The American Cancer Society (4416 Expressway Dr, Virginia Beach, VA 23452) or The American Heart Association (2263 Wolf St, Virginia Beach, VA 23454).

Watching a love one suffer is one of the hardest things one has to endure. Johnny was blessed with Emily by his side. Thank you Emily for taking such good care of an old friend and classmate. He would light up at any CHS events you got him too. I will cherish one of our last times together and the wonderful picture of the two of us. I could see the old Johnny in his smile. Yet, he’d apologize for not being himself! My thoughts and prayers are with you Emily and the family. Johnny is in a better place. Peace of Christ!

Emily,
David and I are so sorry to hear of John’s passing.Even though we have not been in close contact with both of you since we left FBCN we thought of both of you often. We will always remember the good times we had in Sunday School class and the couples retreats in Blackstone.David was just remembering the fire Johnny help make at the Sunday school party at Triple R that almost caught the woods on fire.I will always remember Johnny being a true gentleman.At the couples retreat jumping up to get everybody more tea or coffee.Then when I had pnemonia bring me some soup for my lunch.Finally when my mom was in the nursing home and he was too after his first visits he’d make daily visits especially when I was there to see her.I know it’s been rough but know now that John has traveled to a far better place with no more pain and suffering.You will be in our thoughts and prayers.
David and Lutricia Glunt

My thoughts and prayers are with Emily, family and friends. I was lucky to reconnect with Johnny at the September Cradock Get Together at Mario’s. He and I talked for a while catching up. During our conversation Johnny told me of the health issues he had been through and going through. Johnny told me he was not worried. If it was his time, he was ready to meet the Lord. He knew it would be a tough time on his lovely wife, Emily, family and friends, but he would be at rest and not suffering. I had not seen Johnny since I graduated from Cradock in 1967. I am so glad I was able to see and talk to him. Rest in Peace Johnny. You will be missed. You are now in heaven watching over all of us.

Johnny and I reconnected at Mario’s last year. I had the privilege of talking with him as recently as just before his surgery. Our visit was so lighthearted and sweet. I am so happy that I had a chance to hear his voice one last time. What a sweet remembrance from a childhood friend. I am so sorry Johnny suffered so much in his life but I am happy he had a beautiful love in his life, Emily. Love to you, Emily. Sweet regards, Katherine

Have not had contact with Johnny in years but the high school memories are vivid and special. RIP Johnny

John was a great young athlete who created many memories for his friends and admirers at Cradock High School in the late sixties. He remained close to his classmates and old teammates throughout his life.

My deepest sympathy to his family and many friends in grief. May he rest in peace.