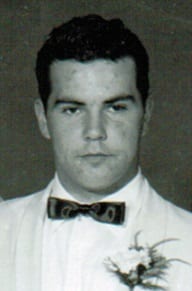 John Eugene Blaski, 79, of Virginia Beach, passed away on December 3, 2015, surrounded by his loving family. He was born on December 6, 1935, to the late John and Donna Blaski in Warren, PA. He married Mary Catherine Toth on September 7, 1957. John served our country as a proud member of the U.S. Marine Corps during the Korean War. He worked as a civil servant for the U.S. Customs Treasury Department, and retired as a Special Agent after 26 years of dedicated service.
John is survived by his wife, Mary, son, Michael Blaski (Sue), and daughter, Elizabeth Ruhlman. Grandchildren, Jennifer Beck (David), Christina Sayyed (Christopher), Joshua Blaski, Hannah Blaski, Michael Blaski, Samantha Ruhlman, John Ruhlman, and Joseph Ruhlman. Great grandchildren, Savannah, Steven, Christopher, and Caroline Sayyed. Sisters, Gloria Werner of Montana and Carol Ristau of North Carolina; and dear friend, Joseph Ruhlman. He was preceded in death by his sons, Jeffrey and Christopher.
A memorial mass will be held on Thursday, December 10, 2015, at 11:00 am, Star of the Sea Catholic Church, 1404 Pacific Ave., Virginia Beach, with Fr. Esteban DeLeon officiating.
In memory of John, the family would like donations to be made to the Oceana Volunteer Fire Department, Station 8, at www.tmcfunding.com. Online condolences can be directed to the family by visiting www.altmeyerfh.com.

Dear Beth, I was so sorry to learn of your father’s passing. Please know that you and your family have been in my thoughts and prayers. I have been thinking about you a lot lately
With love,

Mary (and Family),
In the 1970s and 1980s John and I worked together as Special Agents in Norfolk. For a time he and I shared the same office space in the Old Customhouse. John was a great guy who was always there when you needed him. Though we hadn’t kept in touch once I left the area, I would periodically catch pictures of him (and you) in the Chapter News section of “The Customs Agent” newsletter. It’s ironic how the decades pass so quickly. I will always have fond memories of working with John on investigations, his dedication to duty and his friendship. Rose Mary and my prayers go with you.

I had the pleasure of working with John in the 1970’s. He was an outstanding Special Agent. He was a great friend. He will be missed by all.

Mary and Family, please know that I send my deepest sympathy for your loss. I worked with John in the mid-seventies in the Special Agent in Charge, Norfolk office. Best way to describe John is that he was “steady” — both feet solidly on the ground. He always saw things through to the end, with utmost integrity. It is truly a blessing that, after retirement, John was able to live his life out with his family in the Tidewater area, an area that he loved. May he rest in peace after a job well done.

Dear Mary & Family, Lisa and I were so sorry to hear of John’s passing. John was a great guy and we always enjoyed our time together. Please know that you and your family will continue to be in our prayers; John will be missed and remembered with a great deal of respect. Love you, Jeff

Mr. Blaski’s warm smile will always be in my heart. I have fond memories of him and your family when I was growing up. He worked with my Dad for many years. We all had fun at my wedding in 1993. He will be greatly missed. Mrs. Blaski, may God wrap his arms tightly around you and your family today and always. Staci (Brisbin) Griffin

I had the pleasure of working with John when he served with distinction as a Special Agent with the U.S. Customs Service, Department of the Treasury, and he became one of my closest friends. Most recently John served as the President of the Southern Virginia Chapter of the Association of Former Customs Special Agents. He was highly regarded. Donna and I are comforted by the many wonderful memories he left us and we will think of him often.

Dearest Mary, & family, we are so sorry for your loss, John was such a great guy who has now joined some other pretty awesome people!! Lookout up there Dear Lord! We always got some giggles or laughs out of our home base. He will be sorely missed Love You Mary!!