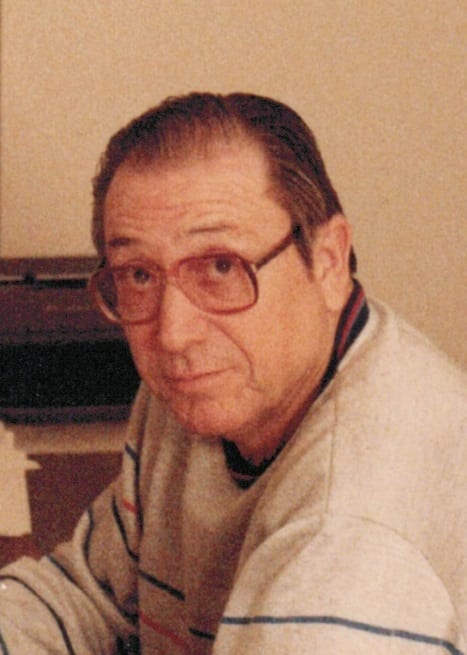 Joe K. Wade, 87, passed away early August 14, 2015. He will be missed greatly! He was a loving husband, father, grandfather, and great grandfather. He was never too busy for his family. He spent many a weekend and holiday cooking on his grill in his backyard, for family and friends.
He was born in Bells, Tennessee, to Vann B. and Velma Wade, and retired in Chesapeake, after serving in the U.S. Navy for 24 years. He is survived by his loving wife of 65 years, Lorraine Wade, and three children: Dennis Wade of Norfolk, Mark Wade and wife Ginger of Chesapeake, and Pam Buddles of Virginia Beach. He is also survived by his four siblings and his brother in law: Frances Thurtell of Annapolis, Maryland, Elise Nayden and husband Frank of Baltimore, Maryland, Vann Wade and wife Annette of Glen Bernie, Maryland, Richard Wade and wife Donna of Pensacola, Florida, and Chuck Roydhouse of Annapolis, Maryland. Joe was predeceased by his sister Ann Roydhouse and his brother in law Frank Thurtell. Joe also had many nieces and nephews.
Joe enjoyed hunting with his sons, Dennis and Mark, and even managed to shoot the biggest buck! His ten pointer has not been beat yet. Joe and Mark also spent many weekends off shore fishing for tuna.
Joe enjoyed traveling, visiting family, and camping at their campsite at Thousand Trails, in Saluda, Virginia. All four grandchildren, spent many happy days crabbing, fishing, swimming and playing putt putt golf at the campground with Joe and Lorraine. Dennis, Mark and Pam would often drive up for the day, to spend time together as a family.
Joe also enjoyed attending his four grandsons’ sporting events, and was even known to travel across country to attend their events! There were very few wrestling matches that he did not attend of his grandsons, Luke and Jon Buddles. Even when some of those matches were in South Dakota, he and Lorraine packed up their motor home and traveled to support their grandsons and their teams. Joe also attended many of his grandsons, Ian and Zachary’s, baseball games. Joe and Lorraine traveled to Cooperstown, New York, to watch and cheer on Ian’s baseball team, the year that they played at Cooperstown.
Joe also had four great grandchildren: Josh, Chloe, Michelle and Cash. Joe not only spent time with his grandchildren and great grandchildren when they were old enough to play sports, but also when they were babies. There are many pictures of Joe holding a baby.
Joe was an active member of St. Matthews. He belonged to the men’s group at St. Matthews and was a member of the Knights of Columbus. He was a knight of the fourth degree.
Joe lived a long life and didn’t miss an opportunity to spend time with his family and friends. He will be remembered fondly, and greatly missed.