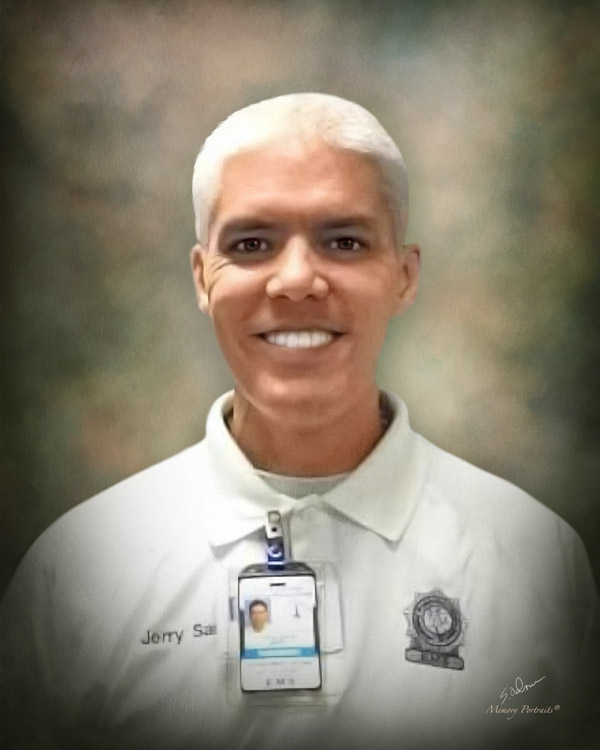 Everyone at VB Rescue is in mourning today. Senior Paramedic Jerry Sams passed away Tuesday night. He was 51.
Jerry began his VB Rescue career in 2007 as a member of the Plaza Volunteer Rescue Squad. In his nine years of service at Plaza, Jerry was recognized multiple times for the most rescue duties ran. Jerry was the go-to person to help with extra staffing and squad initiatives.
In 2017, Jerry was hired as a Paramedic with the Dept. of EMS. Jerry served the Virginia Beach community with pride, bringing a smile and positive mindset to work every single day. Jerry thoroughly enjoyed being a Paramedic and always looked for ways to enhance his skill set while continuing to help others learn as well. He lifted the spirits of everyone around him. Jerry took that
mindset with him to the VB Rescue Training Division, where he worked tirelessly to teach others to serve.
A small gathering to remember and reflect the heroic life Jerry lived will be held on April 22nd at the Court House Horizons building in Virginia Beach from 4:30 PM to 7:30 PM.
Jerry, you are missed more than you know.
Rest in Peace, Jerry. We’ll take it from here.

I hope you’re getting your ice cream up in heaven. Still missing you.

I knew Jerry for a short while and admired his strength and tenacity in managing his trying circumstances. He left me with valuable lessons on how to show up with courage. Isaiah 30:15

I knew Jerry for a short while and admired his strength and tenacity in managing his trying circumstances. He left me with valuable lessons on how to show up with courage. Isaiah 30:15

My condolences to Jerry Family, I had the pleasure to work with Jerry and he always greeted me with a smile. Jerry will definitely be missed.

I remember showing up to pick up Jerry with my dog from one of his stays…” you brought your dog???!!!!” It was an interesting ride back home as he got licked and loved by her. I will miss our rides to and from Duke with the most excellent playlist; getting into the zone car after you with classical music going when others would have rock or something to pump them up; your support after my heart attack; going to your woodshop and you so proud of your craftsmanship. I loved hearing about your work at the shop and was in awe of your work. You taught my daughter how to run and bought her first pair of running shoes. You were so proud of how well she picked up what you taught her. I was thankful she got to know you.
You were so stubborn. You had a tenacity about you that was unmatchable. People made fun of you for how you spoke, and you learned to tell them to pound sand. I am so proud of you. You were a good medic, an honest medic, and a pretty decent guy. Noriko, I am so very sorry for your loss. Jerry was a special guy who will be missed dearly by my family.

I will miss Jerry’s smile and his good heart wanting to help EMS in anyway he could. It has be a while since I have seen him but I want forget his kindness.
God bless you Jerry.

I am so heartbroken that Jerry is no longer here. Jerry was a very gentle and funny soul with a smile that would light up a room. He will be sorely missed. No more pain or cold Jerry. Soar high.

I loved working with Jerry. He always made me smile. He used to show me how he would sync his music playlists to his running so he could be faster. They man was an incredible guy! Miss you my friend.

Jerry was a one of a kind individual, he always had a smile and never had a bad thing to say. His positive attitude was second to none. Thank you Jerry for all the memories you have left with us.

I only met Jerry once at one my company’s functions, but in my many conversations with Noriko I learned that Jerry was well regarded by his co-workers and deeply loved by Noriko. My deepest sympathy to Noriko and to Jerry’s family and friends.