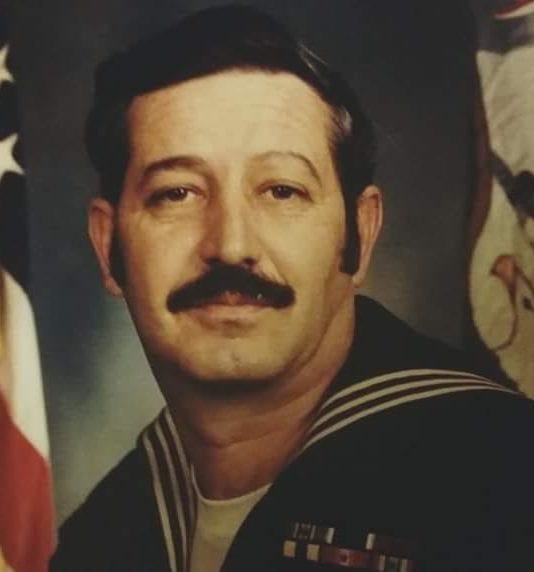 James Puckett was born in Pensacola, FL on June 13, 1954 to Manville Puckett and the late Mary Faye Louise Wheeler-Cox. God welcomed James into his kingdom on January 26, 2017.
James retired after serving in the Navy for 23 years. He also served 3 years in the Reserves. He was a member of the VFW Post 392.
James was a loving husband, father, grandfather and great grandfather. He loved to spend his day on a river bank with a fishing pole in hand.
James was preceded in death by his mother Mary Faye and his sister Brenda Kaye.
James is survived by his wife Gladys Puckett, his son Steven Puckett, daughter-in-law Kim Puckett, his daughter Melissa Puckett Luedtke, his son-in-law Louis Luedtke, II. Nine grandchildren and one Great Grandchild. His father Manville Puckett (VA), his siblings Patti (Puckett) and Rick Tucker (VA), Donnie Puckett (NC), Bonnie Puckett (WVA), Tim and Deb Puckett (FL), Robert and Stefania Bertoluni Puckett (OH), Lisa Puckett KY) also his Step Mother Laverne Perdue (KY) Step brother Larry Perdue (IL) and their families. Many In-Laws and their families as well as many friends.
Funeral services will be held Sunday, January 28, 2017 at 4:00 PM in the Altmeyer Funeral Home, Maestas Chapel 1801 Baltic Avenue Virginia Beach. The family will receive friends prior to the service from 3:00 PM till 4:00 PM.

Met Jimbo when I checked into VA-42 we spent a lot of time together on Viswep Det out to Elcentro and Carrier quals on many ships, a great Airframer.. Jimbo we have the watch RIP my Friend, My Sincere Condolences to the family.

God bless you Jim! Thank you for all you did for me as a young sailor while in VA-42. Your watch is over stand down. Fair winds and following seas.

I served with Jim in VA-42. He was a great mentor and shipmate. He had a certain way to tell me when I was doing something the wrong way. Lol. I’m very sorry for your family’s loss. Fair winds and following seas shipmate, brother and teacher.

Rest in Peace Jim. I remember the good times we had in VA-42

So sorry for your loss prayers to all of you you are all in my thoughts. I love and miss you all dearly. Time is short enjoy everyday as it is your last because we never know when it will be.

I will miss a good friend and shipmate

Lifting you all up in thoughts and prayers. Hold onto the sweet memories. Hugs. Bobbie Bullock-Smith

RIP Shipmate. Fair Winds and Following Seas.
We served together onboard NAS Oceana.
Great Leader in our training squadron VA42. May God be with your family.