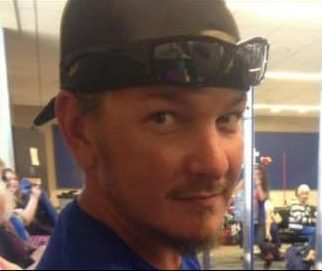 James “Jay/Scooter” RoyDel Ritter 1981 – 2022
Chesapeake – James “Jay/Scooter” RoyDel Ritter passed away March 25, 2022, at home.  He was born May 31, 1981, in Millington, Tennessee, the son of Russell Ritter and Terri Smiley.
Jay leaves behind his fiancé Mary “Ginger” Bouchard and daughter Dymond. He was predeceased by his Maternal grandmother Barbara (Schroeder) LaBelle, Uncles, Randal (Randy) and Brian LaBelle. In addition to his daughter and fiancé, he leaves behind his father, Russell Ritter of Texas; Mother, Terri Smiley and Stepfather, Don Smiley of Virginia; Brother, Russell Ritter and Sister in Law, Michelle Ritter of Connecticut, Stepbrother, Donnie Smiley of Virginia; Paternal Grandfather, William LaBelle Sr. and Uncle, William Jr. of Virginia; as well as 7 Nieces and nephews and numerous cousins and many friends.
Jay enjoyed fishing, skate boarding, playing darts, draw cartoons and flowers, and spending time with nieces, nephews and friends. His most enjoyment was meeting Ginger and spending time with Dymond “Little Jay”.
Services will be held Sunday, April 3 at Altmeyer Funeral Homes Southside Chapel (5033 Rouse Drive, Virginia Beach, VA 23462).  His visitation will start at 12pm with services immediately following at 1pm.

From the moment your father and I married, I considered you as one of my sons – both you and your brother. It is with deepest sorrow I mourn your passing. Your Dad and I have holes in our hearts that leave an incalculable emptiness. God bless all your family with comfort and peace – a peace we cannot, at the moment, understand. We love you.

Jay, Rest in Peace Dear Friend, you will be missed! Thank you for loving Mary and sharing a daughter with her. Dymond is beautiful and you shine through her. I will cherish the memories we all had together!