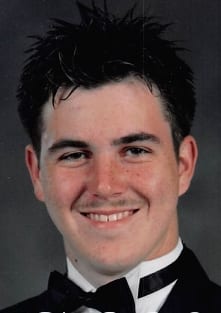 Our Beloved
James Franklin Jenkins III
Known to most of us as Jamie, was truly Our Beloved. Our Lord God relieved him of all his pain and suffering on Sunday, January 17, 2016. He battled more than a year with cancer. He never gave up; he pulled strength from his entire family, especially from the Love of his life, his Mi Amor, Brianna Li. She has been by his side for 8 years.
He is preceded in death by his precious Pop, James Sr. He is survived by his devoted mother, Sherry Jenkins, his father, James Jr (Jimmy) and Stepmother, Toukou Jenkins, his Great Grandmother, Frances Vaughan, his Birth Mother, Robyn Morgan Sample, his wonderful Fiancé, Brianna Carr, his Aunt Terry Barnes, his Sisters, Casey Barnes, Linda, Tina, and Leanne Jenkins, his brothers, Jordan, Jacob, and Justice Pinkney, Dillen Jenkins, John Walker Wilson, and Jackson Morgan Brace, his Step-Parents Joseph S and Krista Pinkney.
Jamie had a life-long love for football. He played for Woodside High School and Christopher Newport University. His love carried through in his support of his favorite team, the New England Patriots. One of his most cherished memories is visiting his fiancé’s family in Boston and going to Foxboro Stadium and the Pats training facility.
As an employee of the Newport News Shipbuilding, he simultaneously attended the Apprenticeship Program and became a proud graduate in 2012 and continued his work as an Outside Machinist X43. He had a true love for his job along with his upper management and crew. He spoke of this often and always had a smile when relating one of his countless stories that came from the workplace.
Outside of working and spending time with Brianna, he cherished the time spent with all his family and treated his friends as he would his family.
He had a passion for playing paintball and video games. His favorite bands were ICP and Gorillaz. He liked his music to match his personality, fun and upbeat.
Anyone who ever met Jamie would agree that he was the guy that would fight for the underdog, do for the meek and mild, and give the shirt off his back for anyone in need.
The family wishes to express their deepest gratitude for the outpouring of love, prayers, and support from all our family and friends. We wish to thank the caring staff at Mary Immaculate Hospital.
Visitation is at Altmeyer Funeral Home- Denbigh Chapel located at 12893 Jefferson Avenue in Newport News, Virginia on Wednesday, January 20th, 2016 from 6-8pm. The funeral service will be held at the funeral home the following morning, Thursday, January 21st, 2016 at 11am with burial to follow at the Parklawn Cemetery on North Armistead Avenue in Hampton, Virginia.
The family is accepting flowers at the funeral home or, in lieu of flowers; donations can be made to Esophageal Cancer Research in honor of James Franklin Jenkins III.

i met Jamie during a very difficult time
In my life. He was my biggest supporter, protector and best friend. Although I moved away from Virginia at the end of 2008, Jamie made sure we maintained a friendship and talked at least once every few months. I’ll always love Jamie, the Jauggernaut, my neighbor, and not many will get this but, *shitsweak* 143!

Jamie and I met Jan ’08 when I moved across the hall from him at our Lucas Creek Apartments. I was terrified to be living by myself and you introduced yourself right away. Instantly you were my best buddy and protector. I couldn’t of been more thankful for you. You were there for me during a time not many people were. You’re my hero, Jamie. I love you! 143

We send prayers for Jamie’s family. He was our son Jeremy’s first friend at Woodside when we moved here. He always brought a smile to our faces. His hugs always left me with a warm feeling. Jamie’s smile and infectious positive attitude could brighten any day.

Love to all of Jamie’s family. As I have not seen Jamie since he was a young boy, I have heard such great things about him. Sherry, you and James were great parents to him. Be proud of that and know he is with God.

I don’t have the proper words to express the depth of my family’s sorrow over Jamie’s loss,,, it does not seem real,,, our thoughts are with the entire Jenkins family ,,,, Jamie was the best of the best

Mrs. Sherry, I’m so sorry to hear about the passing of James. He always had a smile on his face and a kind word to say to anyone he met. I remember him from little league Baseball he played with my Son Jamal Pollard they were on the same team. God Bless your Family.

I was saddened to hear to about Jamie passing at work today, at Newport News Shipyard. I only known him a couple of years but it that time short span, I found he was kind, polite, courteous, a great coworker and great guy. Always smiling !! My codolences ‘s are with the Jenkins family. Jamie fly with angels. Sincerely Shanita Bacon and family

My memories of James are happy ones. He never complained even though I knew he was in pain and always had that sweet smile on his face. I felt the love you shared with Bri and mom every time I saw you. You were a trooper fighting this battle of life and you never gave up. God needed another special angel and he rec’d a great man to fly high.
Many prayers and hugs to the family.

Sherry and family we will always think of Jamie as a part of our family. We will always remember his smiling face and making sure he was always welcomed in our home . There are no words to say to help you through your pain . God speed Jamie you will forever be in our hearts and we will see you again someday .Until then rest easy my sweet Angel❤️