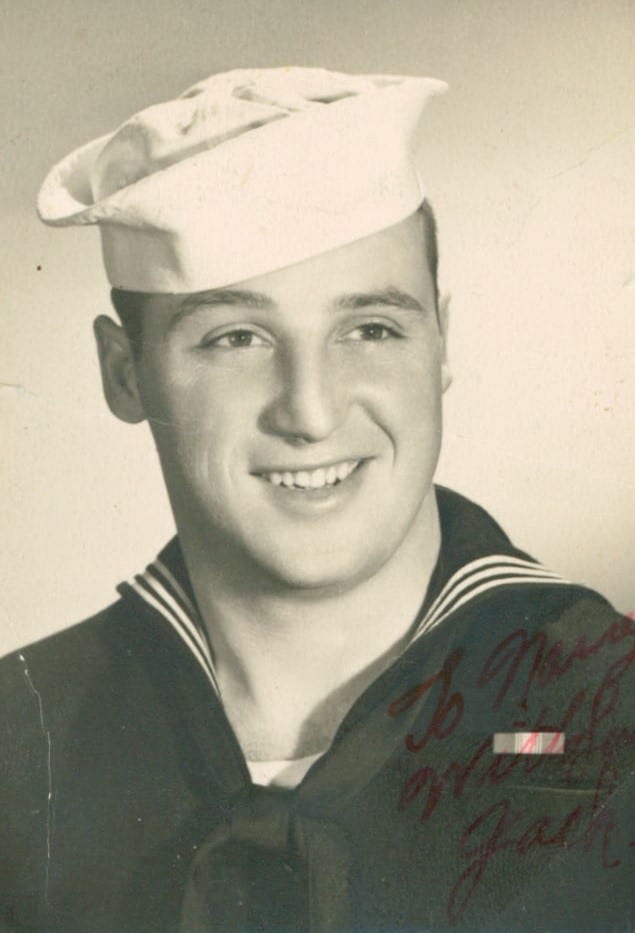 Jackie Lee Baker passed away on December 25, 2018.  Jack was born October 5, 1932 to the late Frances and Charley Baker in Jennings, OK.
In 1952, Jack joined the Navy as a Hospital Corpsman and loved every minute of his 31year career.  He served during the Korean War on troop ships.
Jack and Nancy married in San Diego and had many adventures thanks to the Navy.  Duty stations included NAS Sanford, FL, where their son Keith was born, Medical Admin. School, Portsmouth Naval Hospital, Guantanamo Bay, Cuba where son Terry was born, Cinclant Fleet, Marine training in Camp Lejune, USS Boxer, USS Nesplen, Work Study Group, USS Forrestal, 5th Naval District Headquarters, USS Albany CG10 and Naval Safety Center, Norfolk where he retired as a Master Chief Hospital Corpsman in 1983.  He was a member of Fleet Reserve Association (Branch 60), Disabled American Veterans (Chapter 40) and CRUISER Sailors Association.
Jack played softball on Navy teams and was a coach for Little League and city softball and basketball teams.  After retirement from the Navy, he was a property manager for Ameribank and started his own business working for real estate companies.  He enjoyed a large garden every year, elk hunting in CO and deer hunting in VA.
Jack is survived by his wife of 62 years, Nancy; sons, Keith and Terry; grandsons, James and Jesse; granddaughter, Brooke and great-grandson, James.
A visitation will be held at Altmeyer Funeral Home, 5033 Rouse Drive in Virginia Beach on Sunday, December 30th from 3:00 p.m. to 6:00 p.m.  Interment will take place at Arlington Nation Cemetery at a later date.
In lieu of flowers, donations can be made to your favorite charity.  Condolences may be left for Jack’s family below.

Nancy, we are so sorry for your loss. We cherish our memories of Uncle Jack and enjoyed the video greatly. We will keep you and the family in our prayers. Love – Kerry & Janice

Shirley, so sorry to hear of the passing of your brother. Thoughts and prayers are with you and your family as you go through this difficult time.

Nancy our prayers and love are with you. Sorry we cannot be there, but we are with you in spirit and love.
Shirley, Ronnie & family

Great shipmate always fair with everyone. Both of us from Oklahoma. Taught me to play pinnacle. May He Rest In Peace. Fair Winds And Follows Seas Shipmate

Wishing peace to all of the Baker family, especially you Nancy. I will see you Sunday. Jack was such a good sport taking, picking up Nancy at all our tours. And we would always wave or say Hi to each other. Like many of us, I am of a military family also & therefore appreciate Jack’s Navy service. My thoughts are with you.