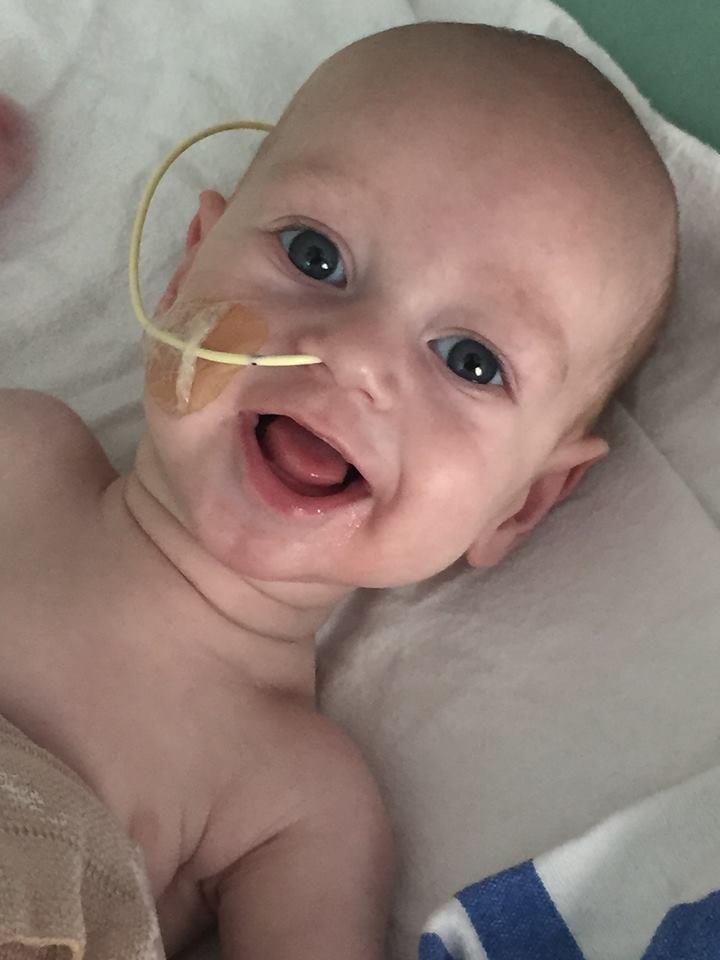 Jack Henry Callaghan, the cherished son of Richard and Sarah Callaghan, passed away peacefully in his mommy and daddy’s arms on Sunday, November 1, 2015. Jack gave us six wonderful months of love, smiles and affection. His strength, courage and positivity inspired everyone he met.

Left to treasure his memory are his parents; grandparents Robert and Barbara Pratt, and Alan and Karen Callaghan; great-grandparents Helen and the late Michael O’Donnell, Audrey and the late Henry Callaghan, and Joanie and the late Wright Pratt; aunt Katie Long and her husband Zack; uncle Jonathan Callaghan and his wife Jodie; and uncle Paul Callaghan. He is further survived by other relatives and friends around the world who love him dearly.

Jack was also preceded in death by his great-grandparents, Thomas and Erma Keener, and Lucinda Jones.

Family and friends are invited to celebrate his life on Friday, November 6, 2015 at noon. His services will be held at The Altmeyer Funeral Home-Southside Chapel at 5792 Greenwich Road, Virginia Beach, VA 23462.

Memorial donations may be made to the Children’s Hospital of the King’s Daughters at www.chkd.org/Support-Us/Donate

I feel blessed to have met Jack and to have seen his beautiful eyes and smile – thank you for allowing me to care for him during his time at CHKD. I lit a candle for him and for your family at my church’s remembrance service this weekend. My thoughts and prayers remain with you!

Heaven has another tiny angel. You are all in my heart and prayers.

Kisses for you baby Jack, love and hugs to your family.
-CoPilot2012 May’15 TCF

I am sorry for your lost, Barbara. Know that your grandson is in heaven dancing with the Angels.

Jack was such a beautiful boy and was very lucky to have such amazing parents. Love and prayers are being sent from Oregon. <3

he was such a beautiful baby with those big eyes and bright smile. He will leave such a gap in your lives. My thoughts and prayers are with you.

Although words seem inadequate, I am so sorry for your loss. My thoughts and prayers are with your family at this time.

I am so sorry for your loss. Praying for all of you. Jack was a special boy and I can’t help but picture him being held by angels in heaven.

Good night to your little Prince & hugs to you all…

I am so heartbroken for you guys and my thoughts and prayers are with you! I am so lucky and blessed to have had the chance to be apart of his life and your families. I will never forget those beautiful blue eyes and the sunshine that as in his face and both of yours whenever you saw him. A double rainbow surrounded our school today, and I instantly felt Jacks spirit upon us, giving us comfort as if to let us know he was in peace. God must need him for something very important now and he will forever be able to be in peace with no pain or suffering. Hold on to each memory and know that you can never lose the sound of his laughter and love that you all felt for those precious 6 months. Love to you all and thank you for allowing me the opportunity to hold Jack and be apart of his life and yours. May God give you strength now. I will never forget you Callaghan family. Love always, judi gray