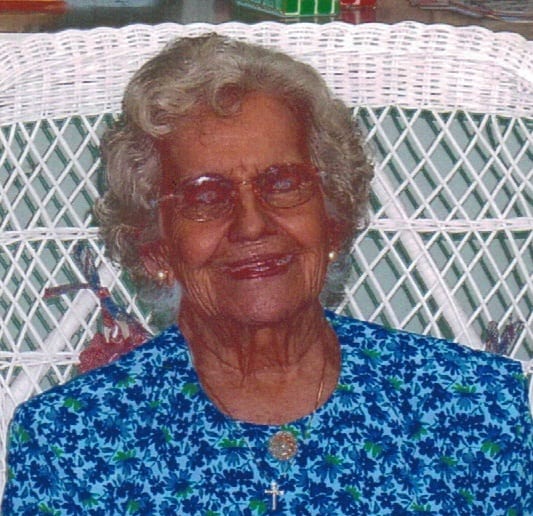 Chesapeake-Hope S. Nocella, 91, passed away on September 19, 2015. She was the daughter of the late Willie and Miama Davenport of Creswell, North Carolina. Hope was a strong Christian & loved the Lord.  She was a member of Bethany Freewill Baptist Church for forty-five years.  She was also a member of the Ladies Auxiliary and handled all of the flowers in the Church for twenty years.  She was known as the “Hat Lady” by the members of the church as always adorning a different hat each week.
Hope is preceded in death by her loving husband, Ralph T. Nocella; daughter, Delores Nocella; and four brothers and five sisters.
Left to cherish her memory are her six daughters, Pat Newby and Albert of Virginia Beach, VA; Rosemary Thebarge of Virginia Beach, VA; Joyce Janis and Robert of St. Petersburg, FL; Toni Pippin and Richard of Chesapeake, VA; Denise Zimmerman and David of Moyock, NC; and Sherrell Nocella of Norfolk, VA. She is also survived by sister-in-law, Grace Nocella Hoggard of Chesapeake, VA; twelve grandchildren; 16 great grandchildren; twelve great-great grandchildren; and many nieces and nephews.
On behalf of Hope’s daughters, they would like to give special recognition to Richard and Toni Pippin for all they have done for their mother.
The family of Hope will receive friends at Altmeyer Funeral Home, 5792 Greenwich Rd, Virginia Beach, on Tuesday, September 22, from 6-8pm. A funeral service will be held at Bethany Free Will Baptist Church, 2430 Azalea Garden Rd, Norfolk, on Wednesday, September 23, at 12:30 pm, followed by a burial at Rosewood Memorial Park in Virginia Beach. Condolences may be offered to the family at www.altemyerfh.com.

My deepest condolences to you and your family on the home going of your Mother. I am so glad I had the opportunity a few months ago to be with you, Richard and Hope at Peggy’s home for dinner. A lot of good memories from that short visit and getting to know your Mother a little better. May you be given strength, peace and love as you continue to carry on with all those good memories.

Our prayers are with you and your family, she is with the Lord now in Peace.

Toni and Richard: We were very sorry to hear of the loss of Toni’s Mother. Please know that our thoughts and Prayers are with you and the entire family during this difficult time. We Pray that the Peace and Comfort of our Lord and Savior will be with you in the coming weeks and months ahead and any grief you may experience will be quickly replaced by many fond memories of your Mom.

To all of my cousins, what a sad time. This has been a most unusal time for us all.who would have thought two sisters to pass so close together. Let’s us learn a lesson from them, at the end they called their names. Sisters forever and always! I love you all and my Aunt Hope will be missed. We were lucky to grow up together what a life! Your cousin,Lynn