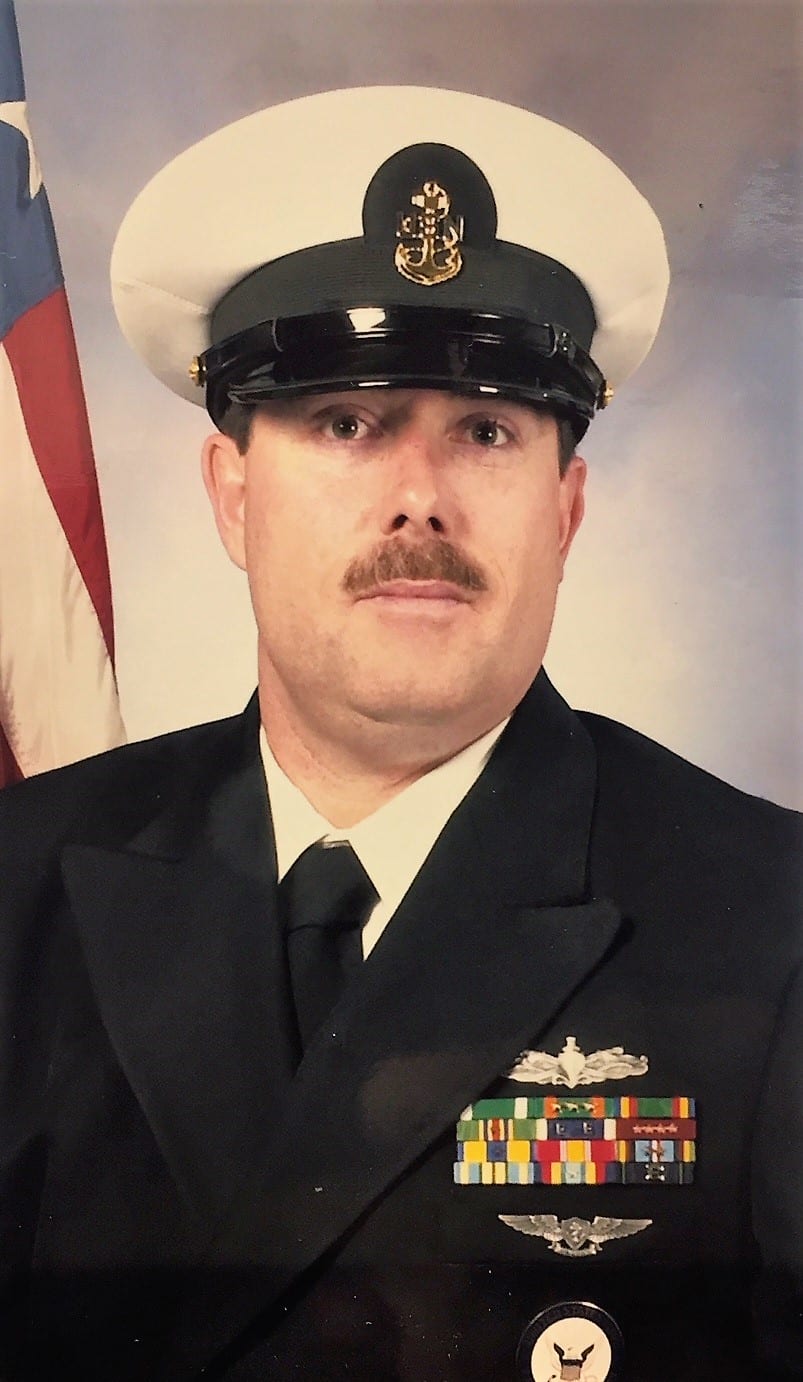 Harry Niles Anders, Jr. (58) passed away Tuesday, June 9th, 2020 in Virginia Beach, VA.
Harry was born on October 11th, 1961 to the belated Harry Niles Anders and Virginia Muriel (Murphy) in Dayton, OH. He was affectionately known to family as “Andy.” He graduated from Vandalia-Butler High School in 1980. Afterwards, Harry enlisted in the United States Navy where he proudly served for 24 1/2 years. He served as both an aviation electronics technician and a navy counselor, and attained the rank of chief petty officer in 2000.
While enlisted, Harry served on the USS Forrestal, USS Saratoga, USS Nimitz, USS Enterprise, and USS San Jacinto along with a myriad of shore duty assignments in between. He was responsible for the leadership and guidance of thousands of sailors throughout his naval career. Harry received numerous accolades, awards, and commendations due to his diligence, efficiency, and dedication.
After his naval retirement in 2004, Harry worked for UHP Projects, Inc. and Aleutiiq, LLC. He was most recently a federal employee at the Personnel Support Detachments at NAS Oceana and NOB Norfolk; he started as a contractor and later became a supervisor. He was happiest when helping sailors, both in his military and civilian careers.
Harry married the love of his life, Virginia Lynn Salmon, in 1984; their daughter Jessica Lynn was born in 1985. He was a loving husband and father, dedicated to the care of his family.
Those closest to Harry knew him as a hard worker and good-natured prankster with a good and yet terrible sense of humor; he couldn’t keep a straight face when he was being mischievous. Harry took great pride in the care of his home and yard, and would often listen to music as he worked. He also enjoyed relaxing on his patio with a glass of wine. He loved to decorate for holidays, but especially Christmas. He was always willing to help people in need. He loved staying busy and working with his hands; he was talented and skilled enough that he could fix just about anything. He loved stargazing and watching the sun rise at the beach with a cup of coffee. His love for science and technology passed on to his daughter.
Harry loved sports; in his youth, he played football and baseball and ran track. He was an avid fan of the Baltimore Ravens and Ohio State Buckeyes, and also enjoyed NASCAR.
Harry was a life member of both the Veterans of Foreign Wars Post #392 in Virginia Beach, VA and the American Legion Post #25 in Newport News, VA. Harry was also a member of the AMVETS Post #99 in Vandalia, OH. Harry was previously a member of the USS Powhatan chapter of STARFLEET, the international Star Trek fan association, and was most recently a member of the Parrot Head Club of Tidewater.
Harry was preceded in death by his parents, Harry Niles Anders and Virginia Muriel (Murphy) of Vandalia, OH; aunt Donna (Anders) Gilliland of Tipp City, OH; uncle Michael “Mick” Anders of Vandalia, OH; aunt Mary Lee (Martin) Roeder of Englewood, OH; and many beloved pets, especially his Tiny Cat and dog Jack.
Harry is survived by his wife of 35 years, Virginia Lynn, and their daughter Jessica Lynn, of Virginia Beach, VA; his sister, Vicki (Anders) Roberts and husband William, nephew William Kyle and niece Alexis Suzanne of Catonsville, MD; uncle Charles Anders and wife Sue of Vandalia, OH; aunt Linda (Anders) Hellman of Englewood, OH; uncle Morris “Butch” Martin of Vandalia, OH; aunt Rebecca (Martin) White and husband Charles of Vandalia, OH; various cousins and many cherished friends; and his beloved cats, especially Shadow and Punkin.
A gathering honoring Harry’s life will be held on Friday, July 10, 2020, from 6:00 pm to 8:00 pm at Altmeyer Funeral Home & Crematory, 5033 Rouse Drive, Virginia Beach, VA 23462. Harry will be interred at Arlington National Cemetery at a later date.
In lieu of flowers, donations may be made to the American Cancer Society and the Disabled American Veterans in Harry’s memory.

Harry was a good man, a good husband, a good father and a good sailor. He did a lot for me.

Ginny, How can we ever forget the Fruitcakes Follies and the “retired Hooters Girl” and “Fanny Flamingo” Maybe they are entertaining the other Parrotheads who greeted Harry when he left this realm for the next. We will all miss him but no one will miss him more than you!

Ship Mate’s Cruising onboard USS Enterprise, (partners in crime?) I meet Harry, while attached to the USS Enterprise, he was assigned to my work center, many a night’s we would spend in his shop, laughing and joking together. Every now and then playing card (Porker). We’ve spent many time’s at my house as well as his socializing and trying to understand his dog (Duke), those were the days, my friend and partner in crime. Don’t forget to throw a bone to Duke. Rest In Peace my friend. You will be missed. Until we meet again in heaven.

I remember this sweet boy as a child, he was the first child for his parents and his grand parents on his fathers side. Andy was a happy baby a first class father, husband and Navy Chief. I was very proud of him, he was a go getter and always strived to be the best. I miss him and love him dearly. I will miss are phone calls and his ragging me. God bless my sweet, rest In peace. We lost a wonderful person and heaven just received a beautiful angel. Until we meet again sweetie.

A Parrothead for many years! So glad to have known you for the past 20 years! In the words of Jimmy Buffett, “We’re sending the old man home”… rest well sailor/pirate♥️