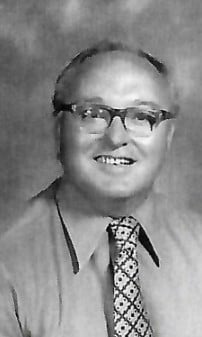 Upon graduating from flight school in 1950, he enlisted in the 82nd Airborne Division as a paratrooper, served in the Korean conflict and was honorably discharged in 1953. He then enrolled at Lenoir Rhyne University in Hickory, North Carolina, where he played football and met the love of his life Betty Lou Herman. After graduating in 1957, he took a coaching and teaching position in Staunton, Virginia where he coached football and baseball for four years. In 1961, he began coaching football and track at Augusta Military Academy until he and his family moved to Norfolk, Virginia. He was the offensive coordinator of the 1966 State Champion Granby High School football team. In 1975, he moved to Maury High School, where he coached J.V. Football and Girls’ Soccer for 19 years. He retired in 1994 and became a part-time behind-the-wheel driver education teacher for 17 years. He trained countless new drivers, but his two favorites had to be his granddaughters. He was proud that he spent 37 years teaching and coaching, 17 as a driver education instructor, and a total of 45 years with Norfolk Public Schools.

In his retirement, he enjoyed becoming a regular at the Jewish Community Center’s gym, watching football, feeding the birds, and gardening, challenging his family to see who could grow the first tomato of the season.

He will be remembered as a humble, sincere, faithful, and compassionate man of God. He dearly loved his family and cherished the time spent with them. They got together “every time a fly died” and sometimes for even less. He felt blessed to have his family close by, in what they lovingly and accurately called the “5 mile radius.” They were the most important part of his life.

He loved traditions and would eagerly declare something a tradition even if it only happened once. His family will carry on these traditions, though most of them will probably skip the New Year’s Sauerkraut and pickled eggs.

Pap, as his granddaughters called him, loved structure. There was never a time when he didn’t have a camera in his hand: every holiday, birthday, or event you could count on Pap to capture it forever. His smile would reign from cheek to cheek, gleaming off those bifocals. His birthday song always fell a bit off-key but he could hit every note. Global warming might stand a chance now that Pap has rejoiced with Grandma; all of the special occasion cards to capture a brief moment will sit on their shelves this year. His family will miss his generous hand and forever open heart.

The Sigler Family would like to thank all of the doctors and nurses who cared for him and all of the friends – whom he considered family – who wrote, called, and visited. There is no doubt he left this world knowing that he was loved and cherished, and for that, his family is grateful.

Services will be held on Saturday, October 1, 2022 at 11 a.m. at St. Peter’s Episcopal Church at 224 S. Military Highway, Norfolk, Virginia 23502. A reception will be held following at the Church. In lieu of flowers, memorial donations may be made to St. Peter’s Church Building Fund. He will be laid to rest next to his beloved wife in the church that meant so much to both of them. Condolences may be left for the family at www.altmeyerfh.com.

My thoughts and prayers of comfort will be with you all.

What a wonderful tribute. May you all find peace and comfort in these memories and your time spent together as a family.
Sincerely,
The Firestone Family

I was a former member of St Peters Church any time we had a special cook out Coach was always there to help out Although he was not a cook he was willing to do a lot of other thinks to help out’ After one special night, he was known as Mr. tea maker We will miss a God loving man like the Coach

May your memories of Harold Lloyd Sigler, give you peace, comfort and strength…

Dear Mr. Sigler, this message is for you, a patient who was always kind to us, always smiling. I am so grateful being your nurse and taking care of you every time when you came to our clinic. I wish to find a perfect words to described how much you are appreciated in our clinic, everyone who met you is sad here. I want to thank you for being part of our lives as a wonderful patient, always nice to us. God bless you!
“God grant me the serenity to accept the things I cannot change; Courage to change the things I can; And wisdom to know the difference..”.
R.I.P

To my dear friends, The Sigler Family: I have so many fond memories of “Coach.” He could make anyone feel special and carry on a conversation about pretty much any topic. I was always impressed with his ability to form sincere relationships with people, mostly by asking questions and really listening. He will be truly missed. Please know that I love you all and will always be here to support you. May Coach’s soul rest in peace and may perpetual light shine upon him. All my love, Reggie.