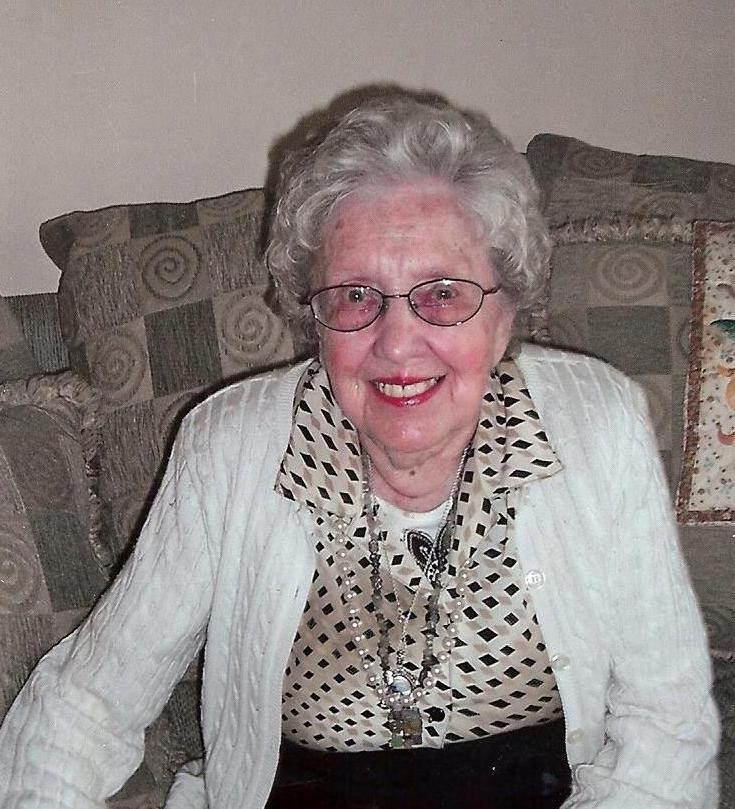 Grace Mildred Swenson Mayes, 98, was called home Wednesday, February 17, 2016, at Atlantic Shores Retirement Community in Virginia Beach, VA, while surrounded by family and friends.
Born in Cornwall, NY, Mrs. Mayes was the daughter of Ernest and Florence Swenson.  She graduated from Syracuse University where she met her husband, William Glenn Mayes.  They moved to Akron, OH where she lived until 2006.  Grace moved to Virginia Beach, VA where she lived near her daughter, Carol and her family.
After graduating from Syracuse University, she met her husband, William Glenn Mayes, who earned his PH.D. in microscopy at Cornell University.  In 1940, the two love birds married and in 1945 moved to Akron, OH, where Mrs. Mayes taught school in the Akron Public School System.  After a career of teaching in Akron, Mrs. Mayes retired and took photography and oil painting classes at Akron University.  Later she became active in Akron International Friendship – currently named Global Ties Akron – even serving as the president of the organization, which hosted international visitors from the state department, international students going to Akron University and Japanese students visiting the United States to practice their English skills.  For her service with Akron International, Mrs. Mayes was recognized by the State Department for her work, and presented with the Emery Award in 2005.  She was an active member in both the First United Methodist Church and later the Church of the Good Shepard.  In 2006, Mrs. Mayes moved to Virginia Beach, VA to be closer to her family, who had all moved away from Akron throughout the years.  While there, she enjoyed Thalia United Methodist Church and the many activities put together by Atlantic Shores Retirement Community.
Mrs. Mayes was preceded in death by her loving husband of 59 years, Glenn Mayes.  She is survived by her children, Carol (and Doug) Wehner of Belle Haven, VA, Marilyn (and Tom) Zeleznik of Hilton Head, SC, and William (and Dorie) Mayes of Waxhaw, NC, as well as seven grandchildren and 15 great grandchildren.
A Celebration of Life Service will be held on March 5, 2016 at 11 a.m. in the Altmeyer Funeral Home at 1801 Baltic Avenue, Virginia Beach, VA.  The Service will be officiated by Reverend Elinor Dalton.
In lieu of flowers memorial donations may be made to Global Ties Akron or Thalia United Methodist Church Memorial Fund, 4321 Virginia Beach Boulevard, Virginia Beach, VA 23452 or Medi Home Health & Hospice, 530 Independence Parkway, Suite 200, Chesapeake, VA 23320.  Condolences and memories may be shared with the family by clicking on the Post a Condolence link below.

Yosemite National Park painted by Grace Mayes
(Shared by her grandson, Brian Wehner, in her memory)
“My 98 year old grand mother, Grace Mayes, passed yesterday very peacefully. I have found comfort from reading posts and looking at pictures on Facebook from family and friends, so I thought I would share my favorite painting, her artwork of Yosemite, that hangs in my house.”
She truly was an Amazing Grace!”
~ Brian Wehner
(via Facebook)

Dear Mayes family,
We lived across the street from Grace and Glenn many years ago. We have such fond memories of them welcoming us into the neighborhood and giving us the history of our house. They delighted in seeing our young children and told such interesting stories of their work with the international community. Truly a couple full of life. We are saddened to hear of Grace’s passing.

Dear Mayes family, Grace has been such a “grace” to so many people here and abroad. We worked with Grace and Glenn through The University of Akron’s International Programs. They were always so kind and helpful to our students and their families who came to study and live in Akron. The Mayes family has been missed.
Pearlmarie/JD Goddard (Drs). The University of Akron. Akron, OH

Grace M. Mayes (1917- 2016)
Rest in Peace our dear friend!
There are people you meet in your lives who leave a lasting imprint on your hearts- Grace Mayes left a lasting imprint on my heart and on so many others here in our Akron community and around the world.
A lifelong educator and peacemaker, Grace taught in the Akron Public Schools and upon retiring she and her husband Glenn continued as lifelong learners and educators. They took groups around the world as part of a course they offered at The University of Akron. As volunteer Co-Presidents for 15+ years of Global Ties Akron ( http://www.globaltiesakron.org ) (formerly known as Hosting International Travelers and Akron International Friendship); they developed programs to welcome the world to our community and to bring the world into classrooms.
Grace started our global education initiatives more than 30 years ago. She believed that our international students, visitors and residents in our community should share their stories and their perspective with our children. We have continued and grown this tradition in Grace’s honor as part of Global Ties Akron with our Know Your Community- Know Your World (www.know-your-world.org) program.
Grace’s smile, kindness and humble presence always put everyone at ease. She was the perfect citizen diplomat- curious and in awe of each international leader or student that she met, welcoming them with open mind and heart. Truly an “Amazing Grace”
She and Glenn amazed me as I watched them in their retirement years as students of the world learning how to paint, how to play new musical instruments, attending Elderhostel programs at colleges during the summer, leading square dances, and learning how to use the latest technology to help keep the organization going strong.
I truly was blessed to call Grace my mentor and friend. She paved the way for my role with Global Ties Akron and inspired me to advocate for international peace, international exchange and education.
Grace lived to touch the lives and hearts of others. Her angel will continue to inspire us from heaven above.
On behalf of Global Ties Akron- we offer our sincerest condolences to the family of Grace Mayes- her three children- Bill, Carol and Marilyn and their spouses & her many beloved grandchildren, great-grandchildren and extended family. She is reunited with her dearest friend and husband Glenn! Our thoughts and prayers are with all of you! I know you along with her Global Ties Akron family will keep her legacy alive!

Grace was a great educator with the Akron Ohio Public Schools. I am greatful that I had an opportunity to have worked with such a wonderful lady.

Grace was my mother’s roommate and best friend when they both attended Syracuse University. I remember when Glenn and Grace came with their 3 children and visited our family in Ontario, California. I am very happy to have had the connection with the Mayes family whom my parents and our family held in high regard.