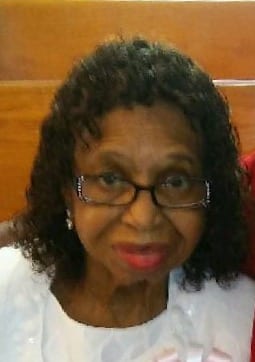 O Love that wilt not let me go,

I rest my weary soul in Thee;

I give Thee back the life I owe,

that in Thine ocean depths

its flow may richer, fuller be.

On Friday, June 30, 2017 at George Washington University Hospital in Washington, D.C., our beloved Geraldine Diggs Hines, surrounded by her loving family, gave up her worn, earthly tent in order to receive that Resurrection body promised to all Believers.
“Geri”, as she was affectionately called, was born in Norfolk, Virginia to the late Charles and Cynthia Forehand Robinson on March 20, 1936, but was adopted and lovingly nurtured and raised by the late John and Marie Diggs. She was educated in the Norfolk Public School System and began employment in several areas soon afterwards. Geraldine possessed a very strong work ethic and worked longest at Norfolk Linen Service for almost fifteen years and the Ford Plant for more than twenty years, all while rearing her family.
In 1995, Geraldine suffered a stroke at work and subsequently retired from the Ford Plant. She received excellent care from her oldest daughter, Brenda until 2010 when she moved to Maryland to live with her daughter, Linda and her husband, DJ who also provided outstanding care.
Geraldine was a member of First Calvary Baptist Church in Norfolk, Va. from age ten until her passing. She attended and supported the church faithfully (serving in the Church Soup Kitchen for several years) until failing health made it impossible for her to continue.
Geri was an out-going person with a vibrant personality and an engaging smile who seemed to take great delight in complimenting others. She almost always greeted you with “Hi, Beautiful” or “How are you, Handsome”? Her comments were positive and really made you feel good! She habitually sent birthday and holiday cards to friends and family until she could no longer do so.
She was family- oriented and the generous manner in which she ensured that their needs were met showed her care and concern for them. This was especially true of her relationship with her young grandchildren and her aunts.
She was exceptionally meticulous about her personal appearance and her home. Everything was clean, orderly, and coordinated. Geraldine was always stylishly and appropriately dressed from “head to toe” – hair perfectly coiffured, make-up expertly applied, manicures and pedicures regularly done, and ‘rocked” those high heeled shoes that accentuated her shapely legs….. It is no wonder that she called herself the “Sexy Senior Citizen”.
She loved music and no matter the situation or mood, music could energize and revive her. She loved to dance, was a good dancer, and even at age 80 could do the “limbo” down to the floor.
We miss her, but thank God for her life and the time that He shared her with us.
Geraldine was predeceased by sons, William Hines and John Gentry Hines and a favorite aunt, Irene Brooks.
Geri leaves to cherish her memories three daughters: Brenda Diggs Etheridge of Norfolk, Va., Lillian Hines Warren (Sudard) of Smithfield, Va., and Linda Hines Gore (DeJuan) of Lusby, Maryland; one son, Johnny R. Hines (Kathy) of Pennsylvania; thirteen grandchildren, including a special grandson, Kermit D. Diggs (Tisha) of Waldorf, MD; seventeen great-grandchildren; six sisters: Margaret Edwards (Raymond) of Portsmouth, Va., Barbara Dudley, Deloris Ash (Zachariah), Theresa Holley, all of Norfolk, Va., Dora Pair (Jim) of New York; and Verda Tate (Corey) of Norfolk, Va.; one brother, James Johnson (Margaret) of Norfolk, Va.; a special aunt, Margaret Wright of Norfolk, Va.; long-time friends Mamie Gaines and Thomas White, both of Norfolk, Va.; and a myriad of nieces, nephews, other relatives and friends, including her constant companion, “Chico”, the family pet.

SORROW IS NOT FOREVER. LOVE IS.

Thank God for Google! Ms. Geri came to my mind and was wondering why I haven’t heard from her on each other birthdays! So something said to me to google!
I’m soooo sorry to hear of the passing of your mom almost a year ago. We worked side by side for 12 years at the Ford Motor Company in Norfolk. I was always referred by her as “her white son”! We enjoyed each other humor there and I especially enjoyed when she brought in extra lunch for me to taste her cooking. Loved her apple turnovers. Even

after all these years we always exchanged birthday and Christmas cards. My many memories with “mom” will not be forgotten.
She WAS like a mom to me there.
❤️ With deepest sympathy, stil, to you all.

Brenda, may God continue to bless you and your family.
Love, Aurthur and Cindy Bookert and Family

Sorry for the loss of your dear love one. May you find comfort in God’s promise when no resident will say:” I am sick.” Isaiah 33:24

You have our condolences. She chatting away with. Liz . I can them now.

I have so many wonderful memories with Geraldine and Linda and DJ. And one of my favorite memories is the time that we spent together sharing a cabin with on a cruise to the Bahamas! She was always ready to get up and go find something fun to do! Love & miss you Geri

My condolences to your family and Geraldine. I am the son of her friend Mrs. White. We cannot attend the funeral unfortunately but would appreciate if we can be mailed a copy of the obituary to 1012 Woodson Road Unit F Baltimore M.D. 21212.