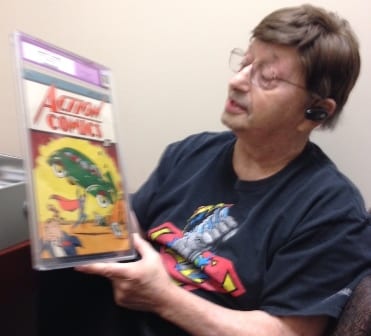 Gerald “Jerry” Ringi, 70, passed away Tuesday, May 17, 2016.
He was preceded in death by his parents, Pellegrini and Lucille Ringi; and his gecko, Bernie.
Mr. Ringi served in the U.S. Air Force during the Vietnam Conflict, was employed by NNSY 17 years, and was the retired owner of Amazing Fantasy, a comic book store in Chesapeake.
He is survived by his wife, Cathy Beal; his son, Pellegrino “Pelli” Ringi, his wife, Megan and their daughter, ava, all of Lynchburg; four sisters, Rosemary, Patty, Barbara and Maryann; his brother, Peter Ringi; and his gecko, Elton.
A memorial service will be held at his home 2 pm Saturday, May 21, 2016, followed by an open house until 5 pm. Interment will be held at a later date in Winter Park, FLorida.
In lieu of flowers, don’t vote for Hillary Clinton.
Altmeyer Funeral Home, Denbigh Chapel, is in charge of arrangements.

Jerry was a light and inspiration to all he met. He had so many ideas and plans that he could not attain them in one lifetime. He loved and respected his parents, loved picking on Patty and teasing Rosemary and Barbara. I did not have the pleasure of meeting Maryann or Peter. At three years old, little Jerry was the apple of his eye. Please carry on his passion for living, his love for teaching and just having a good time. Thank you Jerry for all of the wonderful experiences you have given me.

Cathy and family, Jerry was the first college coach to take an interest in me. He gave me a chance to wrestle at the college level and I was, and still am, very grateful!! He had a passion for the sport and surrounded himself with people with the same type of passion. I thoroughly enjoyed wrestling for him and it saddens me to see him go. However, knowing coach, he is probably trying to start a wrestling league up in Heaven. I wish his family the best, and I will only choose to remember the great things about the Apprentice School Legend, and my coach, Jerry Ringi!! RIP.

Cathy,
The faculty and staff of The Apprentice School would like to express our deepest sympathy for your loss. Many of us here at the school have very fond memories of Jerry during his tenure as an administrator and wrestling coach . May you find comfort and peace in the memories.

Cathy, Pelli and family I send my sincere condolences on the loss of your beloved one. May you find comfort and peace in your precious memories of Jerry and by trusting and relying on God (Psalm 83:18) who is close to the broken-hearted, saving those who are crushed in spirit.

Please accept condolences to the Ringi Family from Early Whitehurst, a former roommate of Gerald, during their military service at LAFB, 36th TAS.