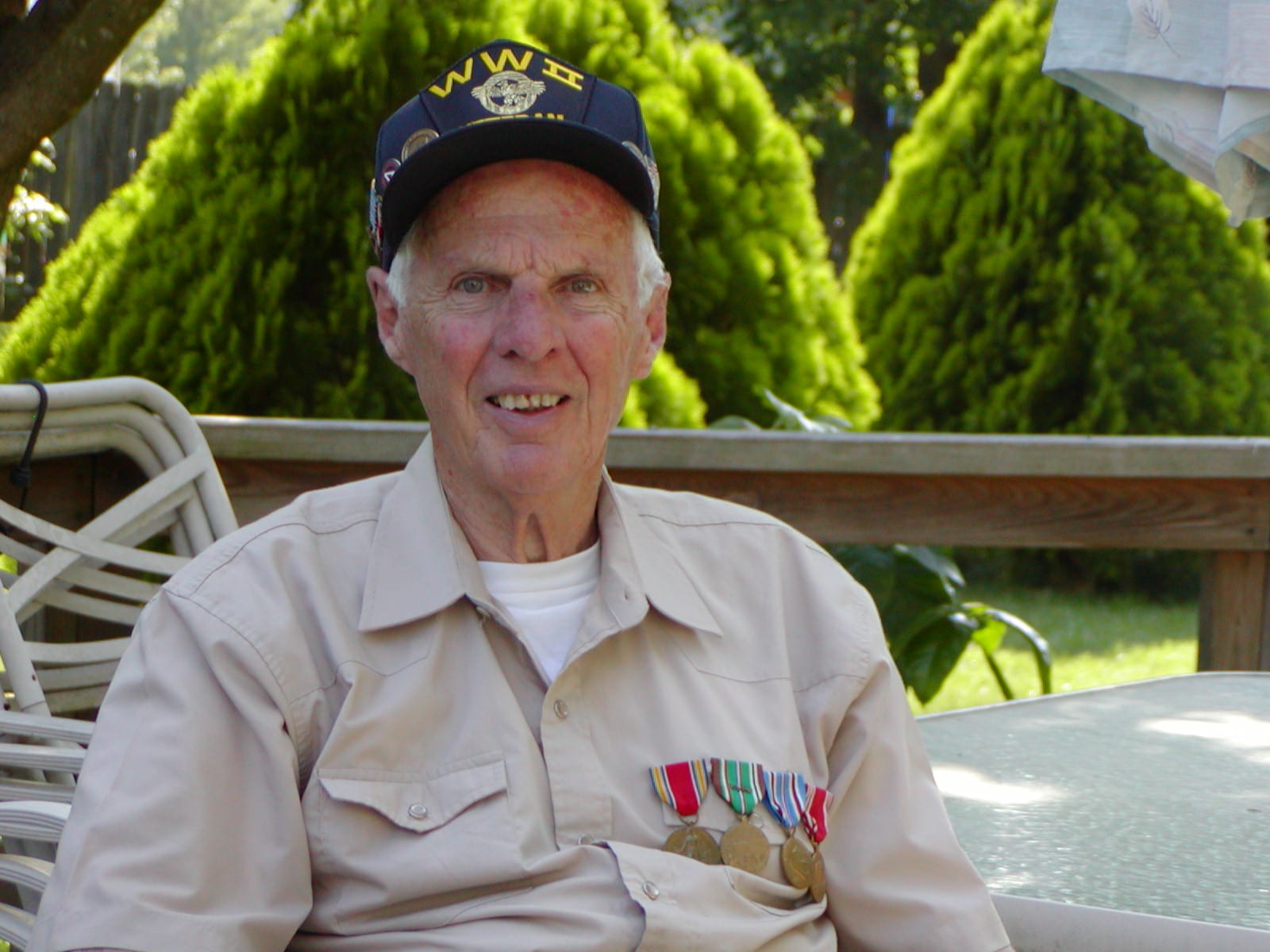 Chesapeake – George R. Schuchman, 91, passed away quietly on February 10, 2016. Mr. Schuchman was born in New York to the late George J. and Marguerite Durring Schuchman. He was a veteran having served in the US Army during WWII as a Radio Signal Corpsman. He retired as manager at NY Telephone Company after many years of service.  His interests were many. Mr. Schuchman was an avid surf fisherman and belonged to various fishing clubs, had worked as a volunteer at the Back Bay Wildlife Refuge and enjoyed operating HAM radios. He was a self-taught Gemologist, earning the title Master Gemologist. He enjoyed gardening, travel, music and and learning and exploring. He enjoyed all people and everyone loved his sunny disposition.
He was predeceased by his loving wife of 64 years, Rose M. Schuchman and siblings, Gerard and Dolores Schuchman.
Left to cherish his memory are children, Anne-Marie Glynn of Herndon, VA, George J. Schuchman of Valley Stream, NY, Catherine “Cathy” R. Schuchman of Valley Stream, NY, Andrew “Andy” Schuchman of Yorba Linda, CA, Irene “Reenie” Giannotti (Paul) of Rocky Point, NY, James “Jim” Schuchman (Winnie) of Hauppauge, NY; siblings, Helen Holm, Joseph, Richard, Anne and Paul Schuchman; eight grandchildren; four great grandchildren; and a host of other family and friends.
The family will receive friends at Altmeyer Funeral Home, Chesapeake on Monday from 6:00 pm until 7:30 pm.  A funeral service will be held on Tuesday at 9:30 am at Altmeyer Funeral Home, Chesapeake followed by a committal service at Albert G. Horton Memorial Veteran’s Cemetery, Suffolk with Pastor Kenny Bass officiating.

The evening, before I heard of Mr. Schuchman’s passing, I was tending the fireplace in my living room.

As I was deciding if it was safe to go upstairs, I was transported back to Valley Stream, 40 years or so ago, watching Mr. Schuchman kneel on one knee, before his fireplace, poker in hand, verifying it was safe to close the doors and go to bed.

That was just one of the lessons Mr. Schuchman had taught me without saying a word.

In his own Gary Cooper way, Mr. Schuchman lead by example, not words. He was a doer, a man who took joy in the world around him.

Whether it was getting up at ungodly hours of a workday, so he could drive to Jones Beach and surf cast for stripped base before taking the LIRR into the city to his job or baking zucchini bread or polishing stones or making me a the surf casting fishing rod I still have, Mr. Schuchman embraced life by doing the things he loved.

A humble man, never one to boast, I can still remember him laughing when he told me of the German Soldiers who surrendered to him in WWII. There he was, a kid, maybe 19, not in the service for very long, walking along when the soldiers stepped out from their hiding spot to give themselves up. He was probably just as scared as they were and they were all glad that it ended without a shot.

But of all the lessons Mr. Schuchman’s taught me, the biggest and most important was in showing your love to your wife above all else.

Mrs. Schuchman was the apple of his eye and it showed. He was devoted to her above all else and he showed that devotion in word and deed. As a 20 something kid, I didn’t get it. As a 60 something man, it makes all the sense in the world to me.

Mr. Schuchman will be missed, but his influence and love and lessons for life will live on in his children, his grandchildren and this kid from Queens.

George was a good friend. He and Rose were one of the first friends we made after
moving to Ches. We spent much time together while we were still there and with all
The group at BBWR. They were both wonderful people. Our condolences to your
family.

George was one of the GOOD guys of the world. I didn’t know him long but I knew that when he spoke I should listen because I was likely to learn something. Wry wit, broad smile, willingness to contribute in his quiet way. He and Rose were one of those couples who made the world around them a better place.

Our condolences to your family. Your Dad was a good man and good friend. We enjoyed his companionship both with the BBWR and the fishing club. Kathy cherishes the ring that your Dad made for her,and I will try to remember all he taught me about fishing.
Both your Mom and Dad embraced our kids and grandkids and will always be remembered as loving people and great role models.