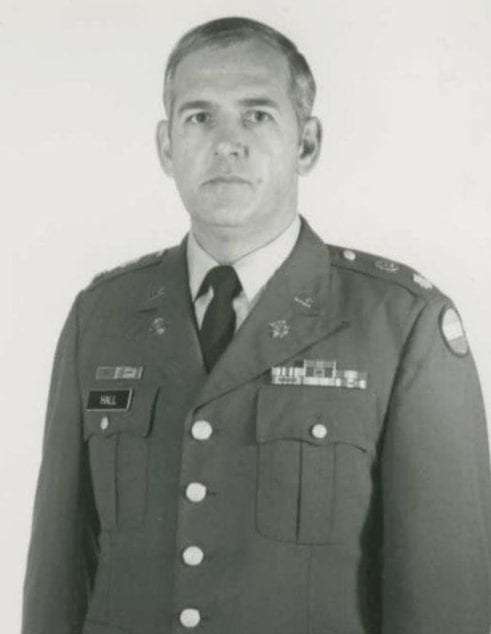 Lieutenant Colonel (US Army Retired) Gary Richard Hall, 85, died Friday, June 26, 2020 at Hospice Care and Support of Williamsburg.
A native of Webster City, Iowa, LTC Hall has been a resident of Fort Eustis, Newport News, Yorktown, Virginia, and several overseas locations. He graduated from Lincoln High School in 1953 and St. Leo Collage in 1978. He was a long time member of Northside Baptist church.
While living in Webster City, LTC Hall enlisted in the local National Guard Unit. (CO. E, 133d Infantry Regiment, 34th Division) and was employed by Carnation Milk Co. Commission a Second Lieutenant from the Iowa Military Academy (1961), he volunteered for the Regular Army in 1963 and was assigned to Fort Eustis, Virginia. In 1965, LTC Hall was deployed to Qui Nhon, Vietnam, 1968 to Korat, Thailand, 1969 to Camp Zama, Japan, 1972 to Saigon, Vietnam, and 1980 to Tel Aviv, Israel. He retired from his military career in 1983 and was employed by the USA Transportation School as a Doctrine Specialist (GS-12) until 1993.
LTC Hall is survived by Betty L. (Stapp) Hall, wife of 66 years, three sons; Timothy G. and wife Dorothy, Thomas M., Theodore R. and wife Patricia, four grandchildren; Jennifer, Joanna, Jessica, and Jonathan, Three great-grandchildren; Ashlyn, Zachary, and Andie.
A visitation will be held Thursday, July 2, 2020 at 6:00 pm with the service and reception to follow. All services will be held Altmeyer Funeral Home Denbigh Chapel 12893 Jefferson Ave Newport New, VA 23608.
The family asks for donations to be made to Hospice Care and Support of Williamsburg.

GARY WILL BE MISSED BY ALL WHO KNEW HIM. I AM THANKFUL HE WAS A SERVANT OF JEHOVAH GOD AND CHRIST JESUS OUR SAVIOUR. I KNEW
GARY WHEN WE WORSHIPPED AT LEBANON AND MY PRAYERS ARE FOR
BETTY AND THE FANILY IN THE DAYS AHEAD MAY JEHOVAH CONTINUE HIS COMFORT EACH DAY THRU OUR SAVIOUR AS WELL.