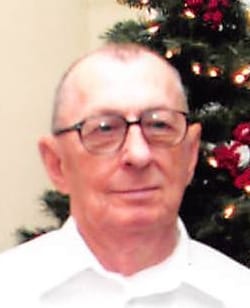 Frank W. Pohl, 90, passed away on Monday, May 30, 2016 in Newport News, VA. Born in St. Louis, Missouri, Frank was a farm mechanic but his life’s passion was working with the Marthasville, MO Volunteer Fire Department. He helped it grow from one small station in the mid-1950’s to three stations by 2005. During his 50 years at the department, he served the community as a firefighter, fire chief, and member of the board. Frank also was a dedicated member of the Knights of Columbus.
Frank was preceded in death by his parents, Frank and Goldie Pohl, and his wife Marion Pohl. He is survived by his son Donald Pohl (Catherine); grandchildren Laura Pohl (Patrick Whang), Janet Spirek (Stephen), and James Pohl; and great-grandchildren Fiona and Siobhan Spirek. A mass will be held in Frank’s memory at St. Joan of Arc Catholic Church in Yorktown, VA on Thursday, June 2, 2016 at 10:00am. Interment will be in St. Vincent de Paul Cemetery in Dutzow, MO at a later date. Altmeyer Funeral Home Denbigh Chapel is assisting the family. Thank you to the staff at Morningside Assisted Living Facility in Newport News where Frank lived for 5 years, and also to St. Francis Nursing Center, also in Newport News.

Catherine and Don, Dave and I are so sorry for the loss of your father. Both of you are in our prayers.

We are all saddened by the sudden passing of your beloved father, father-in-law and grandpa. May you always cherish the memories when he was healthy and vibrant.

Catherine and Don, may he be at peace. God be with you.

We are so sorry to hear about Frank’s passing. We always admired his “being able to fix any engine”. We were always grateful when he helped us out getting an engine to function properly.