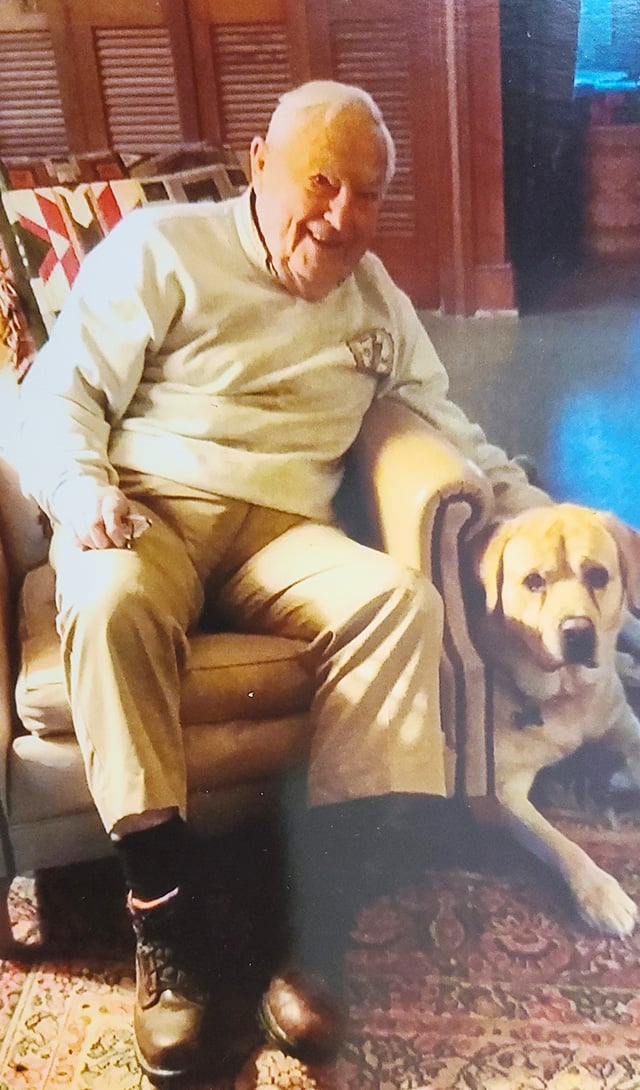 Francis Beale Wilhoit, 96, of Virginia Beach, VA peacefully passed into eternal rest on September 17, 2022, surrounded by family.  He was born November 8, 1925, to James Newton Wilhoit, Sr. and Mary Elizabeth Kite in Old Somerset, Orange County, VA and spent his childhood years in Charlottesville, VA, where he was a Boy Scout. He attended The Woodberry Forest School in Madison County, VA, distinguishing himself in many areas, most notably on the varsity wrestling team and becoming Virginia Independent Schools State wrestling champion in his weight class.  He went on to The University of Virginia (Class of 1949), and again distinguished himself in sports as captain of the varsity wrestling team for two years. He was a member of the Zeta Psi Fraternity. While at The University, he met his future wife, Mary Jean Kirk, and they married September 2, 1950.

The family moved to Virginia Beach in 1954 to the same house Beale would live in for 68 years. He loved his home and created a lovely yard for his family to enjoy which was also perfect for his lifelong pastime of bird watching.  Beale was successful in the road building business, paving many roads in the Virginia Beach area and elsewhere all over the southeastern U.S. Later he became a home builder, developing the Sylvan Lake subdivision, and commercial real estate entrepreneur.

Beale gave much back to the community.  He served many years on the Virginia Beach Volunteer Rescue Squad and was awarded Squadsman of the Year in 1975. He also served as Vice President of the Virginia Association of Volunteer Rescue Squads. Beale was also a volunteer hospital orderly at Virginia Beach General Hospital for seven years.  In 1977, because of his service at the hospital, he was awarded the City of Virginia Beach Volunteer of the Year. Beale was involved in many other organizations in leadership positions and served as President of the Virginia Beach Kiwanis Club in 1959. He supported many charities and donated over five gallons of blood to the American Red Cross over his lifetime. He was a mentor at the Judeo-Christian Outreach Center. Beale was a lifelong Episcopalian and attended Galilee Episcopal Church in Virginia Beach.

An important part of Beale’s life were his dogs. He loved yellow Labrador Retrievers and had a long succession of them who were all faithful companions and whom he treated royally. He and his beloved “Breezy” were known by all in his neighborhood.

Beale was an enthusiastic UVA athletics fan and loved to “talk game” with anyone who would listen.  He was a longtime supporter of the UVA Athletics Foundation. Orange and blue were prominent colors in his wardrobe, usually embroidered with the Virginia Cavalier logo.

Beale was a genealogy enthusiast, amassing an amazing amount of research on many branches of his family.  He was proud that he could trace many of his ancestors back to medieval times and that so many of his family surnames arrived in Virginia in the 1600s and 1700s. One ancestor, Thomas Beale I, was a cavalier in service to Charles I of England, eventually emigrating to Virginia in 1644. Thus, it was only natural that Beale would also become a cavalier…a University of Virginia Cavalier.

A memorial service will be held on Friday, November 4th, 1:00pm at Galilee Episcopal Church, 3928 Pacific Avenue, Virginia Beach, VA. Light refreshments will directly follow in the church fellowship hall.  Livestream will be available at Galileechurch.net or on You Tube. A family graveside service will follow later at Graham Cemetery, Orange, Virginia.

It was Beale’s wish, in lieu of flowers, that any donation made in memorial to him be made to Virginia Beach Volunteer Rescue Squad (vbvrs.org) or Guiding Eyes for the Blind (www.guidingeyes.org).

As friends for many years, Beale will be missed.

Condolences from John and Carol Norris.