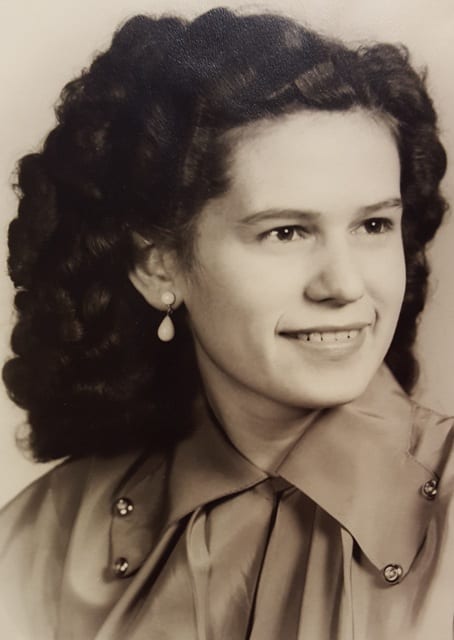 Frances Marie Overacre, 79, of Virginia Beach, passed away on December 8, 2015. She was born on January 31, 1936 to the late Nathan and Mary Williams in Christiansburg, VA. Frances worked as a Secretary for Randy Overacre Painting Company for over 15 years among many other jobs.
She was preceded in death by her husband, Jack Overacre. Frances is survived by her son, Randy Overacre (Corliss); step-son, Reeves Overacre; grandson, Brian Overacre; step-grandson, John Austin; sister, Darlene Few; and many nieces and nephews. Frances was also the godmother to niece, Diana Hall.
A memorial service will be held on Saturday, December 12, 2015, 3:00 pm at Altmeyer Funeral Home, 5792 Greenwich Road, Va Beach.
In lieu of flowers, the family would like charitable contributions be made to St. Jude Children’s Research Hospital and Alzheimer’s Association-Southeastern Virginia Chapter at tmcfunding.com, in memory of Frances. Online condolences can be directed to the family by visiting altmeyerfh.com.

Randy we are sorry for your loss. She is now in a better place with your dad. She was a great lady and I miss seeing her at the house as I go by May God Bless.

I am so sorry for your loss. Your mother and I share the same birthday month . I enjoyed meeting her whenever I had business related your painting company.

Randy @family, so sorry for your loss. God Bless your family ,@ be with in this time of sorrow.

Randy, Corliss, & Brian,
Our deepest sympathy for your loss
We shall all miss her

As my Aunt, I have a lot of fond memories. I guess my favorite was the day she told us she was pregnant with Randy. We may have been distant in miles, but she was always in my heart. I love you, and am going to miss you. Rest in Peace sweet lady.

Randy and Corliss, Im very sorry to hear about Mrs. O. I sure enjoyed the time we spent together talkjng about her childhoid, and having her hair and nails done. If I can help in any way, please feel free to let me know.

Dear Loved Ones of Frances M. Overacre,
Please know that our thoughts and prayers are with you during this tragic time. May the love of friends and family surround you. The road ahead will bring you many ups and downs but know that Frances’ love and presence will always be with you. Be good, kind, and supportive of each other during this period in your lives. Cherish the time you have together and love each other with the same love that she had for all of you.
Sincerely,
Garry and Beth Williams of Chesapeake, VA

To Randy and Family, We want to express our sincerest condolences for the loss of your mother. May the Comforter, the Holy Spirit, be with you during this difficult time. It is written: Philippians 3:20-21 But our citizenship is in heaven, and from it we await a Savior, the Lord Jesus Christ, who will transform our lowly body to be like his glorious body, by the power that enables him even to subject all things to himself. Your mother is whole again and in the presence of all the glory of God. Take comfort knowing she is happy and well cared for with the Lord.

Sorry for your loss, our thoughts and prayers to your family.

Mrs Frances was my best friend for many years, I loved her like a sister. We had many memories over the 49 years we knew each other. I will miss her every day for the rest of my life. God BLESS each and every one of her family especially RANDY