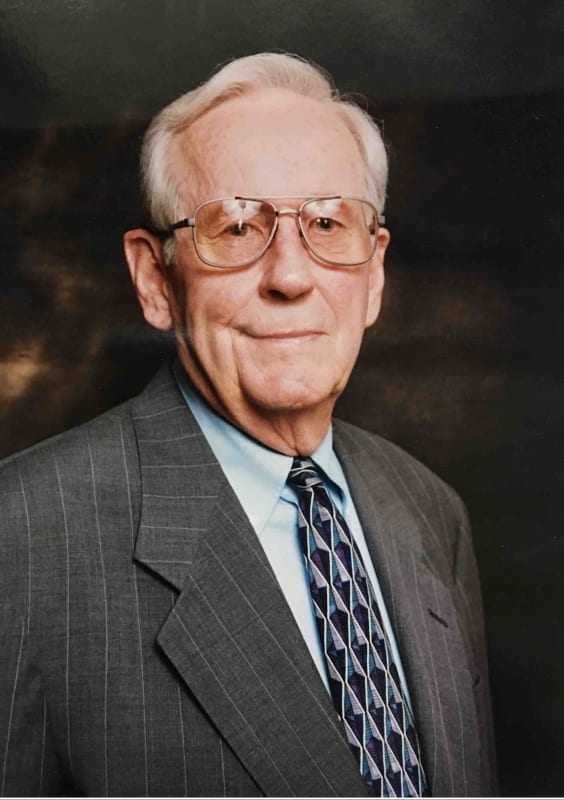 Eugene “Spud” Dewey Nance, 92, passed away peacefully in his home on June 4, 2016  surrounded by his family.  Born on July 7, 1923, he was a proud lifelong resident of Ocean View.
He was predeceased by his parents, Charles and Anna Nance,his beloved wife of 63 years, Rena Claiborne Sayles Nance, an infant son, and sisters Louise Bramble, Virginia Barrows, Elizabeth Ogden and Pauline Reid.
Survivors include his loving sisters, Joyce and her husband Elmer Miller of Virginia Beach and Gloria Ward of Florida ; 2 daughters, Bonnie and husband Delvin Deem of St. Charles, Missouri; Tamara and husband Mark Lindquist, Sr. of Norfolk; 4 grandchildren, Amanda Squires (Jeff), Christopher Deem, Kristin Lindquist (Damian Crowley), Joseph Lindquist; 2 great grandchildren, Luke and Caitlin Squires; many nephews, nieces and a host of dear friends. He is also survived by his “adopted” granddaughters, Kelly Balfour and Leigh Zagorski, as well as his extended family at Captain Groovy’s Grill & Raw Bar.
Spud was a 1942 graduate of Granby High School and attended the Norfolk Division College of William & Mary. He was a proud Eagle Scout and a devoted Mason for more than 75 years as a member of Ocean View Lodge 335. After serving in the United States Navy, he began a 35 year career with The Naval Air Rework Facility.  He retired early to continue a life of volunteering while fully embracing his most cherished role as “Granddaddy”.
Spud was active in many charitable organizations throughout his life including the Bay View PTA, the Salvation Army Soup Kitchen and Meals on Wheels all while serving his much-loved church.  He was a Founding member of Miles Memorial Methodist and a member of the United Methodist Men’s Club.  He was also a member of Park Place and St. John Methodist churches.  As a couple, Spud and Rena were skilled bridge players, enjoying the companionship of their friends at the table.  After his retirement they travelled all over the country with close friends and celebrated their 55th wedding anniversary in England.
He will long be remembered for his strong faith, sense of humor and his willingness to help others.
A celebration of his life will be held at 1:00 p.m. June  13, 2016 at Miles Memorial Methodist Church led by The Reverend John Haynes and The Reverend Gina Miller.  The Family will receive visitors at the church one hour prior to services.  Burial will follow at Forest Lawn Cemetery. A reception will be held at the church following burial.
In lieu of flowers, click here to make donations to Miles Memorial Methodist Church.
The family would like to extend a special thank you to Bon Secours Hospice, Dorothy Baldwin, Sheryl Brennell and Frank Hill for their loving and tender care over Spud.

So sorry to here of your Dad’s passing Tammy! What a wonderful life he had! Thank goodness for our memories! Sincerely, Joanne

I would like to offer my condolences to the Lindquist family! You are in my thoughts and prayers!

Dear family, may the Father of tender mercies (Psalm 83:18) surround and comfort all of you during this difficult time and may you find comfort in God’s promise of a resurrection in Acts 24:15.

Spud was a wonderful great uncle. He made the best potato salad I’ve ever eaten, and it was always my favorite part of every family holiday meal. He was always relaxed and sharp-witted. Tammy and Bonnie, I’m sorry I won’t be able to get to Norfolk for the service, but you’ll be in my thoughts.

Though we never personally got to meet him I always heard great stories. Lots of thoughts and prayers go out to your family. Please know we are thinking of you during these hard times.

So sorry to hear of your Dad/Grandaddy’s passing. Jus hearing from so many who knew him what a wonderful person he was, I’m sure he will be greatly missed. Cherish the memories you have and keep him alive through the stories you all have to share in the future. You are in our thoughts and prayers.

My children and I were fortunate enough to live next-door to Spud and Rena for several years when we moved to Ocean View. They were both so good to me and my children, always thinking of them on holidays. I remember Spud’s nightly walks around the neighborhood with Rena. He was such a sweet and kind man. We will miss him.

He was a most gracious gentleman and I loved him dearly , as I also loved his lovely wife .He will be deeply missed , by one and all.