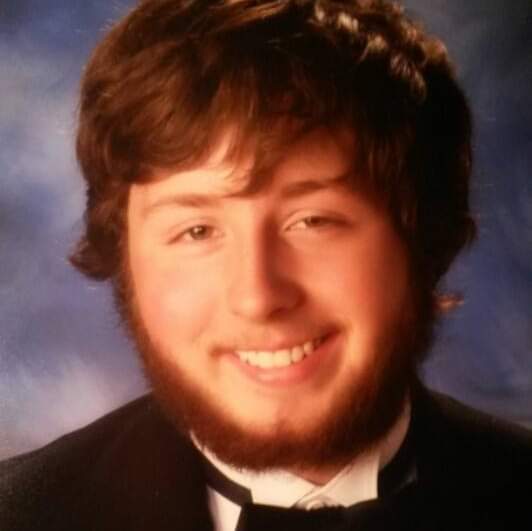 Eric Thomas Hula, 25, of Charles City, VA, passed away on April 3, 2022 after a long battle with schizophrenia. Eric was preceded in death by his grandmother, Sally Roraback; grandparents Stanley Hula Jr. and Nancy Wray Hula; and uncles Tommy Walsh and Stanley Hula III.

Eric was born on January 29, 1997, in Blacksburg, VA. He was especially close with his sisters, Emma and Ellie. He was fiercely protective of them, and always had their best interests at heart. Eric was gentle and loving with animals, including his cats Nip and Hum, and his cat Graystone, whom he was heartbroken to lose last year.

He had a kind heart and loved his friends, whom he went out of his way to help and to spend time with. Eric had a strong sense of right and wrong and was known to protect his friends. Even in kindergarten, he stood up for the new kid who was being teased. And he often thought about justice and engaged in debates about current events.

Eric could see when people needed help, and was known to buy diapers and food for a family in need when he was a teenager, or to give a cold stranger his coat. As an adult, he continued helping others in need, often offering rides to friends, and delivering a sleeping bag and food to a friend who struggled with his own mental illness and was living under a bridge.

Eric gravitated to any musical instrument in the room and could spend hours playing the piano and guitar, often making up new songs. He also loved playing video games, watching anime, reading manga, and exploring local parks, and he would often stop on Afton Mountain just to enjoy the view. One of his favorite things was to invite his sisters to go for late-night walks to look at the stars.

In recent years, Eric’s illness stole many things from him, ultimately including his laughter and his peace. It led him to be cut off from the things and people that he most enjoyed in life. Hardest of all, as with many sufferers, schizophrenia made him unwilling to get the help he needed. In the end, the disease took him from the people who loved him.

Eric is survived by his mother, Sunshine Walsh Hula; father and stepmother, Jeffrey Marvin Hula and Meriah Crawford; sisters Ellie and Emma; grandparents Geoff Walsh and Alane Homer; and many uncles, aunts, cousins, and other family and friends.

The family would like to thank those who have donated to help with arrangements. In lieu of flowers, the family would be grateful for donations to the National Alliance for Mental Illness (NAMI). If you or a loved one is struggling with mental illness, please reach out to NAMI for help.