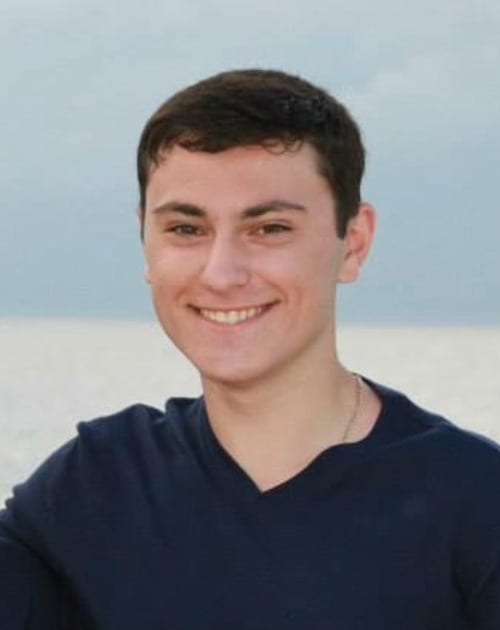 Eric Michael D’Andrea, of Virginia Beach, passed away suddenly on November 2, 2015 at the age of 18 years. He was born on July 23, 1997 in Havelock, North Carolina to Christopher and Eileen (formerly Domonkos) D’Andrea. Eric was a proud graduate of the Class of 2015 of Princess Anne High School earning his International Baccalaureate Diploma. In high school he was a cadet in the Navy JROTC program and a member of the rowing team. Boy Scouts of America was also an integral part of his life. He attained the rank of Eagle Scout with four Silver Palms and served various times on staff for National Youth Leadership Training. He was a member of Troop and Crew 490 of St. Gregory the Great Catholic Church, and a Brotherhood member of the Order of the Arrow Blue Heron Lodge.
Left to cherish his memory are his parents; brother Dylan; and grandparents Bernarda Fonseca and Carol and Louis D’Andrea. Further survived by other family and friends.
Visitation for Eric will be held on Friday, November 6, 2015 at Altmeyer Funeral Home-Southside Chapel (5792 Greenwich Rd. Virginia Beach, VA) from 6:00 PM until 8:00 PM. Memorial Service to be conducted on Saturday, November 7 at the funeral home at 4:00 PM. Online condolences may be offered at www.altmeyerfh.com.
In lieu of flowers, donations appreciated to support the establishment of the Eric D’Andrea Scouting Memorial Fund to support and encourage young people to pursue leadership development at the unit, council, area, section, region, and/or national levels of Boy Scouts of America programs.  The use of the funds is not limited to any particular course or program with the Boy Scouts of America.
Donations can be made by following one of the below procedures:
1)      Mail checks payable to: Eric D’Andrea Scouting Memorial Fund:
Navy Federal Credit Union
PO Box 3000
c/o Eric D’Andrea Scouting Memorial Fund
Merrifield, VA 23119-3000
2)      Transfer directly to the NFCU account (Access Number: 9243650)

Our hearts and prayers go out to each of you. May God give you strength and comfort.

Our prayers and deepest sympathies are with you and your family. Your son and his memory, along with your family, will be in our thoughts–God Bless your family.

I am so sorry for your loss. Thinking about you and praying for your family.

I am sorry for your loss. It deeply saddened me when I heard of Eric’s passing. There are so many good memories from Scouts with him and Dylan in Hawaii! Thank you for being there for me in Hawaii in Scouts, D’Andrea family. I will keep your family in my prayers.

Eileen, Chris and Dylan: Eric was a beautiful boy and a gift to the world. Our love and prayers are with him and you. Mark and Paula Leary

Chris and family – may the many fond memories of your son bring you comfort during these hard times. Our hearts and prayers go out to you and your family.

Sorry for you loss, when I heard I cried and was really emotional as you made a huge impact to my family and I will always remembered that. we are praying for your family ma’am. God bless your family. He sounded like a bright young man. God bless him in Heaven.

Our hearts are broken for your loss. Three Masses will be offered at St Jude Catholic Church in Makakilo, Hawaii for the repose of the soul of your beloved son Eric; on December 14,15, and 16th. May our good Lord grant you comfort and peace at this sorrowful time.