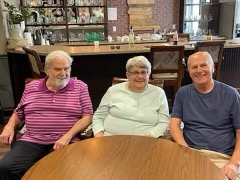 Send FlowersPlant a Tree
Elvina Martha Sande (Marsolek) went home to her Lord Jesus Christ on January 13, 2022.
Elvina was born February 27, 1939, in Winona, Minnesota to Martha (Schank) and Hubert Marsolek.   She attended Saint Casimir Catholic grade school and Winona High School.  Elvina was raised with five siblings, after high school she and her two sisters moved to Rochester Minnesota.   While attending nursing school they enjoyed dancing the night away at the Pla-Mor Ballroom.  All three sisters met their future husbands there on the dance floor.
Elvina was happily married to James Andrew Sande, from Kenyon, Minnesota on May 5, 1962.  James and Elvina moved from Kenyon to Faribault, Minnesota where they raised their three boys.   Elvina was an exceptional housewife, gourmet cook and very frugal shopper.  She could buy a weeks worth of groceries for practically nothing with her savvy coupon prowess.  When the boys were old enough, she began her thirty year career at Jerome Foods until they closed and then Land-O-Lakes.  Elvina’s work ethic would make those half her age jealous.
Elvina was preceded by both her parents, brothers James and Richard, sister Bernice and Bernices husband Clem Hemann.   She is survived by her husband James, son Drew (Colleen) and granddaughter Christina,  son Desmond (Terry) and son Deland (Renee);  sister Ethel (Bob), brother Robert (Carol), brother Gerald (Dawn); and nieces and nephews Craig, Richard, Mark, Robin, Randal, Korie, Karla  Cynthia, Stephen, Dana and Douglas.
A celebration of life will be announced on a future date in Faribault, MN.

I am so sorry to hear of Elvina’s passing. I knew her from exercising at Borders pool or should I say sharing crock pot recipes at Borders pool Every morning I would ask her what she had in the crockpot. Sometimes she had two going at the same time! Lovely woman whom I am glad I had the pleasure of knowing. Rest In Peace Elvina.

So sorry to hear of Elvina’s passing. Enjoyed so much our friendship–met her yrs. ago exercising at the pool. We had good times with the “Red Hats,” the group at Borders, and checking out the pop up markets in the Cities. Especially miss all the good chats–she always knew which stores had the best specials and great ways to stretch a food budget. Blessed be her memory!