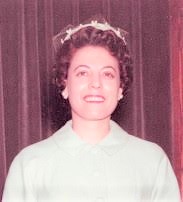 Ellen Rosina Maguire, 93, of Tulsa OK and Chesapeake VA died peacefully on February 1, 2022. She survived her devoted husband Keith Dean Maguire (deceased April 2, 2017) of 55 years. She is survived by her sons Stuart and Jason Maguire; her daughters-in-law Tracy and Kathryn; her grandsons Evan, Mitchell, and Archer; her nephew Peter Fitzgerald; and niece Kay Proctor.
The daughter of Thomas Fitzgerald, a dockworker, and Ellen Martin Fitzgerald, a Quality Street chocolate factory worker, Ellen was born in Lambeth, London, England on May 5, 1928. Growing up in London during WWII, she experienced the Blitzkrieg and wartime children’s evacuation. Ellen loved to work and meet new people and started her long work career as a young child selling firewood and delivering coal in the streets of London. Her fondest childhood memories were of working the Kent hop fields each fall, where on one occasion, she and her mother were strafed by German gunners expending their ammo on their return trip home after an air raid.
Ellen emigrated to the US in the 1950s and became a naturalized citizen in 1954. She worked as an administrative assistant at Vanderbilt University in the Department of Chemistry where she met her husband Keith. Although she lived in various locations across the country, she spent most of her adult life in Tulsa, Oklahoma where she served as a clerk for the county assessor and raised her children to young adulthood. She was actively involved in the PTA, local politics and was a regular caller into John Earling’s morning show on WKRMG. She served as a county delegate in two presidential elections and was an integral member on the campaign teams for Ronald Reagan, Senator Jim Inhofe, and Oklahoma House and Senate member Frank Keating. Ellen continued to work well into her 70s as she was always happy when on her feet and interfacing with the public.
Ellen was happiest when with family and enjoyed planning family events, and camping, especially along the Spavinaw River. She was an avid knitter and coin collector and in her later years traveled the world with her husband Keith. She was a loving, generous woman and a tremendous wife, mother, grandmother, and friend to all who crossed her path. She will be sorely missed.
A memorial service will be conducted in the hop fields of England with her family later this year.  Express condolences to the family below.

With Dad and Archer

Stuart and Mom having fun

Heading to the Big Apple with Mitchell and Evan