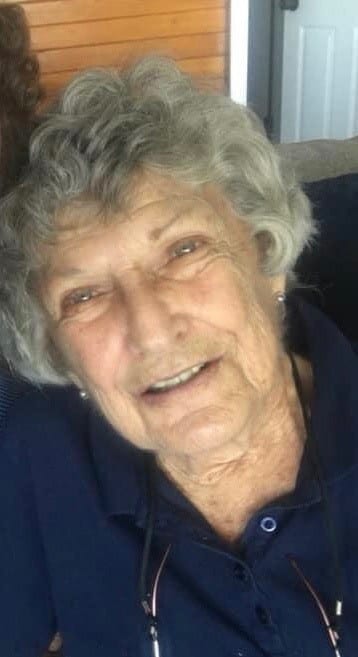 Eleanor (Ellie) Hayne Chisholm, formerly of Duxbury, MA passed away on June 23, 2020 at the age of 93 in Norfolk, VA.  She married the late Richard S. Chisholm in 1948 and they lived in Duxbury, MA for 67 years before Ellie relocated to Norfolk, VA after Richard’s death.  Ellie was the loving mother of C. Mark Chisholm (Vanessa) of Taos, NM, Philip Chisholm (Donna Taylor) of Norfolk, VA and the late Lawrie C. Chisholm.  Ellie is also survived by her two grandchildren, Lydia Chisholm of Winter Park, CO and Molly Chisholm of Taos, NM.
Ellie was the daughter of Lewis and Melissa Hayne of Binghamton, NY.  She was the stepdaughter of Leo Cole, also of Binghamton, NY. She attended Sullins Academy, Bristol, VA and graduated from Binghamton High School in 1944.  She went on to earn a degree in medical technology from Colby College in New Hampshire.
Ellie worked as a medical technologist at Jordan Hospital, Plymouth, MA.  She returned to college and earned a teaching certificate from Bridgewater State.  Ellie loved gardening and worked at Flowerland, Kingston, MA before starting her own business, Crafty Ladies, in Duxbury, MA.
Ellie’s early years were spent with her beloved grandparents in Brownsville, TX.  She liked to travel and especially loved sailing in the Virgin Islands.  Her travels also took her to Thailand and Europe.  Ellie was an amazing knitter and seamstress as well as creating beautiful needlepoint projects.  When her children were young she was active in the Girl Scouts and in Cub Scouts she was a den mother.  Later in life Ellie volunteered at Jordan Hospital (now Beth Israel Deaconess) with her sewing or art projects.  Ellie had many good neighbors on Bayridge Lane and enjoyed walking her dogs Chester and then later Charlie around the neighborhood and conversing with her friends.
In lieu of flowers, donations in Ellie’s memory can be made to Westminster-Canterbury Foundation, on line at: wcbay.com/make-a-donation; or Westminster-Canterbury Foundation Hospice Fund, 3100 Shore Drive, Virginia Beach, VA 23451

I was a next door neighbor bon bay ridge lane of ellie.i couldnt have had a better neighbor then ellie(and dick).kind thoughtful helpful!god bless!

My deepest condolences to you and your family.

Phil, my deepest condolences to you and your family on the passing of your mother. Reading her obituary, it is obvious she led a life of success, adventure, and full of love. May she never be forgotten and may she rest in peace.

Deepest sympathy and prayers from my family to yours during this difficult time. Its a grace for the time we have with our parents. Stay safe brother…

Although I never met Ellie, I knew her through the loving stories her son Phil shared about his family with me. May the Lord grant peace to Ellie’s family.