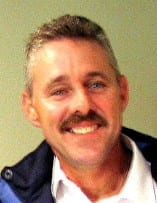 Edward John O’Reilly passed away on February 27, 2016 surrounded by the high seas where he had spent most of his adult life.  For the past 26 years he lived the life of a seaman beginning with a 9-year stint as a boatswain in the navy followed by a 17-year-long career as a helmsman in the merchant marine.  At the time of his death, Edward had the distinction of ABS (Able Bodied Seaman).
Edward was born in Windsor, Ontario, Canada on May 13, 1961, the youngest of four children of Adeline St.Clair Page and Edward John O’Reilly.  He spent most of his youth in northern California before heading off to a life of travelling the world by ship.  He is survived by his three sisters, Mary O’Malley (and her husband Thomas), Susan O’Reilly, and Patricia O’Reilly and his step-father, Antonio Nafarrate.   Edward is also survived by many U.S.-and-Canada-based aunts, uncles, and cousins, all of whom cherish the memory of this clever and creative soul.  His nieces and nephews, Adeline, Katherine, Rachel, Tom, and David mourn his passing.
Edward was predeceased by both his mother and father as well as two uncles, Donald Page, and Wayne O’Reilly and his aunt, Margaret Page.
His loss prompts all who knew him to remember his wit and charm, his intellect and work ethic, and his yearning for a life of travel.  Mostly, however, his passing reminds his friends and family of his love.
“I must go down to the seas again…and all I ask is a …quiet sleep and a sweet dream when the long trick’s over.” ….John Masefield

Ed hustling us at pool…

To Edwards Family, his passing took me as a surprise since it was Feb 25 when we last spoke. It was my pleasure to have him cross my path and I will always remember him as a caring, smart man. My prayers are with his family.

Feb 23, Maersk Iowa, you were standing at the gangway when I was leaving the ship in New Jersey. We were up early that morning to dock the ship. I told you fair well while you stood at the gangway. I didn’t know that it would be my last time to bid your fair well. It was good to spend your last days getting to know you. Fair well Ed.

Working with Ed on the seas remains a very fond memory. He had such an original sense of humor that I will always remember. Fair Winds and Following Seas buddy!

I am so sorry for this profound loss. My thoughts and prayers are for Edward and the family. May he rest in peace.

Praying for family during this time of loss.

You were beautiful, complicated, sensitive and the funniest brother I could of had. I will miss you every day. You are loved.

Rest easy Uncle Ed, may God grant you a generous share of eternity to continue sharing your truly contagious smile.

May you find peace – Praying for calm seas and a gentle breeze. We will always remember your wry Irish wit, charming smile and sharp intellect. Rest in peace Ed O’Reilly – Godspeed.