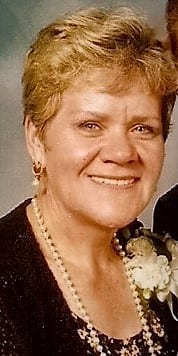 Diane Marie Jensen,74 of Moyock, NC entered into eternal rest on Thursday, January 26,2017 in Virginia Beach surrounded by loved ones. Diane was born in Oak Park, Il on March 21,1942 and graduated from Carl Schulz  High school in Chicago, Il .
In 1994 Diane and her husband relocated to Norfolk, Virginia from Chicago, Il. Diane had a great love and admiration for the Native American culture, attending pow wows annually. She also loved horses, gardening and angels.
She worked as a unit secretary at several different hospitals and doctor’s offices throughout her life.
Eventually she retired and worked at Cracker Barrel as a hostess until her health no longer allowed her to. Fighting a courageous four year battle with stage three lung cancer she exceeded her own life expectancy prognosis given by her doctor by 2 1/2 years, inspiring so many along the way.
Diane will always be known as a warm and loving “people person” who had a smile you couldn’t forget .
Diane’s memory will be forever cherished by her loving husband of 26 years, Michael Jensen; three biological children, Tammy, Jonathan, Kimberly (Greg) three step children , Jason, Suzi and Sherri; ten grandchildren, Morgan, Cody, Marlena, Alyssa, Monica, Nolan, Jade, Clayton, James, Benjamin; two great grandchildren, Caden, Nahla and a host of other relatives and dear friends.
A life celebration service will be held on Saturday, February 4,2017 at 4:00pm at Altmeyer Funeral Home 5792 Greenwich Rd.  in Virginia Beach.
In lieu of flowers, donations can be made to the American Cancer Society in Diane’s name by clicking HERE.
15 Condolences
Inline Feedbacks
View all condolences
Anonymous

Diane was always so kind to me even though we didn’t know each other well. She would frequently send gifts for me with Tammy, especially owls because she knew I liked them. I will always remember her kindness and thoughtfullness. She will be missed by so many but I know you will all be reunited one sweet day. Love and prayers to you all

“To thine own self be true”, a quote one of many I remember you have said and taught me. Many times I have begun to write in your book, yet it is through a veil of tears I do it now. I miss you, I love you dearly sweet mom. I remember one other quote that you taught me. “For he shall give his angels charge over thee, to keep thee in all thy ways. They shall bear thee up in their hands, lest thou dash thy foot against a stone. Psalms 91:11-12. Now I have one for you, “His lord said unto him, Well done, thou good and faithful servant: thou hast been faithful over a few things, I will make thee ruler over many things: enter thou into the joy of thy lord, Matthew 25:21. I love you and miss you dearly, yet I know one day I will see you again. Until then my love always.

My dear sweet wife .It has been a very good, wonderful life,I miss you .Love you very much.

Diane, may you rest in peace. You will be missed by all of us. Prayers for your family.