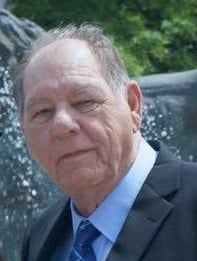 Dean R Keesler, 85, of Virginia Beach, Va. passed away Saturday August 13, 2022 following a brief illness. Born in Damascus Township, he was the son of the late Lawrence J. and Beryl E. Monington Keesler. He was a graduate of Damascus High School, Class of 1954 where he lettered in both basketball and baseball. He was a veteran of the U.S. Army where he qualified as a Sharp Shooter. After receiving an honorable discharge he held various jobs in construction and driving a truck before accepting a position at Three Mile Island Nuclear Power Plant. While at Three Mile Island he worked his way up to a Group Radiological Control Supervisor. He received numerous citations along the way but he was most proud of his assignment as Task Lead for TMI-2 Recovery and Clean-Up for which his leadership and commitment to excellence was formally recognized.
After retirement from Three Mile Island Dean moved into the role of loving Grandfather moving between Pennsylvania and Virginia where is grandchildren reside. While in Virginia he would chauffeur his granddaughters around to their different events and eventually helped teach them to drive. He attended many dance recitals, softball games and graduations throughout the years. While in Pennsylvania he enjoyed spending time with his grandchildren as well. Surviving are sons, Clint and wife Miles, Honesdale, Pennsylvania; Joel and wife Dale, Virginia Beach, Virginia. Grandchildren are: Samantha Keesler, Jessica Keesler Wolf and husband Adam, Kaitlyn Keesler Masino, of Virginia Beach, Daniel Keesler and Rachel Keesler of Honesdale. Great- grandchildren Kennedie, Ariana, and McKenzie Masino and Charleigh and Olivia Wolf, all of Virginia Beach. Sister Audrey Schmitt of Beach Lake; along with numerous nieces and nephews. He was preceded in death by his wife Thelma, a son Paul Keesler, a brother Alden Keesler and a sister June Keesler Marzani. The family extends its heartfelt thanks and appreciation to the wonderful staff and friends at the The Gardens of Virginia Beach, Dean’s most recent
home.
Condolences may be made below. Graveside services and interment in Hillcrest Cemetery in Galilee will be held at a later date.

I am so sorry for your loss. He was a nice person.

So sorry for your loss. Dean was the ultimate gentleman; kind and respectful to everyone as well as loving to his family. He will be greatly missed by all.

May your memories of Dean Royden Keesler, give you peace, comfort and strength…

Sorry for your loss. Your family is in my thoughts and prayers.

So sorry for your loss, Mr K , was a part of the family and friend collective and he will be missed.