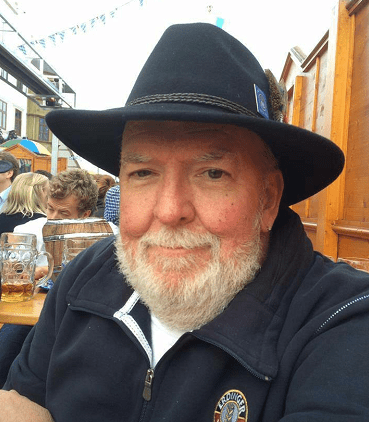 David H. Shaw, a retired US Navy Chief Hospital Corpsman living in Virginia Beach, passed away after a brief illness September 3rd at the Portsmouth Naval Medical Center. He was 61 years old and had been working for the past 17 years as an Engagement Leader with Cerner Corporation, a healthcare information technology company.
David (Dave) was born on February 8, 1955 in Marietta, Georgia and lived most of his childhood years in Forest Park, Georgia. He was a graduate of Forest Park High School. Following high school he worked as a surgical technician at Grady Hospital in Atlanta alongside his mother. He enter the US Navy in November of 1978, completed Hospital Corpsman School and was first stationed at the Beaufort Naval Hospital in South Carolina. He became an Independent Duty Hospital Corpsman “Doc” and obtained the Enlisted Surface Warfare Specialists’ Pin. During his 20+ year Navy career, Dave was stationed at Naval Regional Medical Center in San Diego, CA, USS Roark (FF-1053), US Marine Corp Bases, Camp Pendleton, 29 Palms, CA, Naval Station Bremerton, WA, USS Niagara Falls (AFS-3), Naval Station, Guam, Naval Academy Prep School, Newport, RI, USS Kidd (DDG-993) Norfolk, VA, US Navy Amphibious Construction Battalion 2 Naval Amphibious Base Little Creek, VA and his last duty station Fleet Training Group Naval Amphibious Base, Little Creek, Virginia Beach. He received an Honorable Discharge in July of 1999.
During his younger years, David was a member of Civil Air Patrol, enjoyed dirt bike riding, racquetball and photography. Later he obtained his scuba diving certification and enjoyed many years under the sea. He was a true sports fan and loved his Atlanta Braves, Falcons and NASCAR Racing. He loved to visit baseball parks and ride his Harley Davidson motorcycle. He collected sports jerseys, ball caps and Harley Davidson T-shirts from all over the world. He loved a good craft beer and to visit local breweries wherever he went. He found the place “where everybody knows your name” in Gordon Biersch Brewery and Restaurant in Virginia Beach. He made many friends there and was dubbed Dave #2, having his own barstool and stein. He and his wife Jeri attended Oktoberfest, Munich Germany in 2014 with many of his Gordon Biersch friends. He was active with the Patriot Guards Bikers Group. He was excited to retire in April, 2017 and travel on his newly purchased Class 5 RV Motorhome with Jeri.
Dave had a wonderful sense of humor and loved to tell stories. He was right about everything. He was a “brilliant and hilarious man!” (his words). Dave was also very generous. He was a good husband, father, brother, uncle and friend. Once you were his friend, you were his friend for life.
Dave was predeceased by his parents Cimmie D. and Lura Hall Shaw and his sister Madeliene Carol Shaw Bizub. He leaves to cherish his memory his wife, Jeri Shirley Carson of the home; son, Justin David Shaw of Virginia Beach; brothers, Rev. Dr. Claude Dennis Shaw (Marilyn) of Sandy, Utah; Stacy Marc Shaw of Forest Park, Georgia; stepdaughter, Courtney Lynne Carson of Greenville, North Carolina; nephews, Christopher D. Shaw (Bridget) and Matthew Bizub; nieces, C. Denise Shaw and Rebecca White Wyatt (Jason) and his great nieces and nephew.
He will be greatly missed by all of us. “Prost, Dave Shaw”.
In lieu of flowers, donations may be made to Semper Fi Fund in Dave’s memory by clicking HERE.

Condolences to the family

My condolences to Dave’s family for this great loss. I was working with him on this that would be his last project before retirement. We enjoyed his company, team collaboration, and of course the occasional pint at local breweries. We discussed family, future retirement’s plans, and he shared his enjoyment of life. God Speed Dave.

Dear Shaw Family, I would like to extend my deepest condolences to all of you. Dave was a true friend and could always be counted on. I feel blessed to have had the opportunity to get to know him and work with him over the years at Cerner. Dave will be deeply missed.

I am so sad to hear of Dave’s passing. I am one of his Cerner colleagues and have had opportunity to work on 2 projects with him over the last couple of years. One in Maryland and one in Connecticut. Dave was a wonderful colleague and will be greatly missed by not only his colleagues but also by the healthcare organizations across the US that he helped transform. My sincere condolences to Dave’s family.

I am so sorry to hear of Dave’s passing. I was his RM for a few years and was lucky enough to meet with him a few times when he came to KC. What a kind and nice man!! He will be missed and my prayers to those he left behind.

I’d like to extend my deepest condolences to Dave’s family. Dave’s obituary has one phrase that I can personally attest to; “Once you were his friend, you were his friend for life.” I first met him early in my work career with Cerner and found we both had a mutual respect. Working hard to get things done and done correctly was a key personality trait for him. One thing that always stood out to me was how he would send me a birthday well wish each year, even after our career paths had parted ways. Working with and knowing him was a pleasure. Dave, I will be planning a lobster feast in your name.

Dave will be missed. He was rich with positively and laughter.

My condolences to Dave’s family.

Offering condolences to Dave’s family and friends. I worked with Dave on Cerner projects at Adventist HealthCare over the past few years. He was always kind and easy to work with. We shared many laughs on overnight support. Please know that he was well respected. May fond memories carry you through these difficult days.

My condolences. Dave was a colleague, a friend and a good man. He will be missed.

I never actually met Dave in person, it was always on the phone or e-mail through work. He always made me smile with his messages. I am so sorry and my prayers are with everyone.