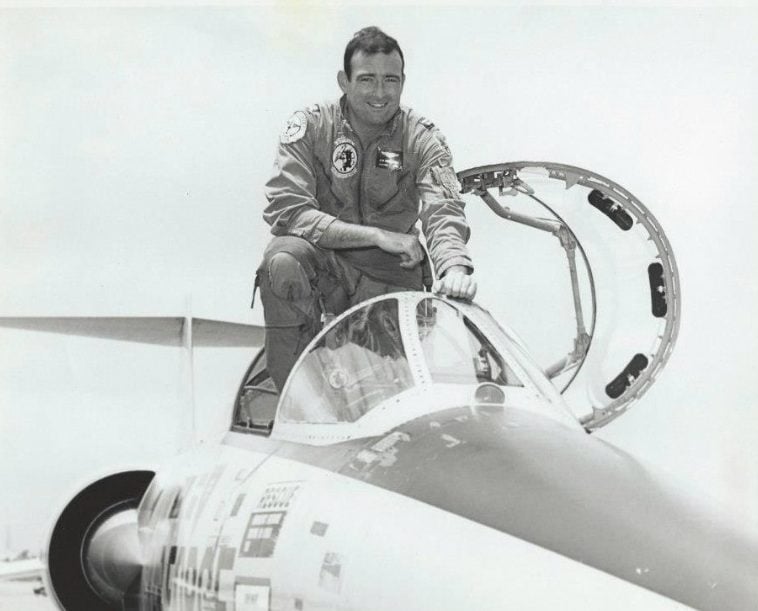 Colonel Robert(Bob) Frank Dundervill, Jr., USAF (Retired), of Virginia Beach, VA, lit the burners for his last terrestrial flight on November 28, 2021.
He was born in Philadelphia, PA on June 21, 1933 to Robert Frank Dundervill, Sr. and Madeline Marie McCay Newton Dundervill. His father married Madeline, a widow with three young sons in 1931. Following the completion of the Newton brothers’ military service in World War II, the family relocated to Rome, Georgia. Bob graduated from Darlington school, attended Marion Military Institute and in 1953 entered the United States Naval Academy with the class of 1957. On June 4, 1957, he was commissioned a second lieutenant in the United States Air Force and entered pilot training. He won his wings in October 1958, graduated from advanced fighter training, and, in 1959, reported to the 444th Fighter Interceptor Squadron at Charleston Air Force Base, SC. During the Christmas holidays, he met the love of his life, Judith Kathleen Tucker, who was visiting her parents who were also stationed in Charleston. They were married January 21, 1961 and started a journey together that would span over 60 years. They moved to Montgomery, AL where Bob was the Aide to the Commanding General of the Montgomery Air Defense Sector and welcomed daughter, Lee Ann in 1962 and son, Robert, III in 1964. He was then assigned to the 319th Fighter Squadron at Homestead Air Force Base , FL and then to the 388th Tac Fighter Wing at Korat, Thailand. Judy and the children spent the separation with her parents in northern Minnesota. Next was graduate school at Wright Patterson Air Force Base, OH where he received a Masters in Science in Aerospace Engineering and he and Judy welcomed daughter, Beth Marie in 1969. He stayed at Wright Patterson AFB as a flight test engineer with a fighter division of the 4950th Test Wing and then, in 1970, began a four year exchange tour at the United Kingdom Ministry of Defense in London. Next was an assignment with the Flight Test Directorate of United States Air Force Systems Command at Andrews Air Force Base , MD and then to the Pentagon with the Directorate of Foreign Military Sales. He was promoted to Colonel and assigned as the Military Assistant to the Air Force Chief Scientist. In 1978, he earned a Juris Doctorate from the Washington College of Law of the American University and was admitted to the Virginia State Bar and to practice before the US Patent and Trademark Office. He retired in 1983 and served as a consultant to a major Department of Defense agency assisting leading edge technology developers to identify and protect their intellectual assets and, where possible, apply their technologies to other Department of Defense programs or the commercial marketplace. His career highlights his sacrifice, his service and his unwavering love for his country.
Bob’s true legacy lies, however, in the manner in which he lived his life. He was deeply devoted to his wife Judy. He was a true example of how to fall in love, stay in love and put love first until the very end. His love for his family was selfless. He wore his heart on his sleeve and made everyone feel important through texts, voice mails, hugs and words of encouragement.
There are no words to amply describe the impact Bob had on his family and friends. He will forever be remembered as a person who spoke softly, led by example and loved unconditionally. His family was incredibly blessed by his presence and will miss him dearly.
He is survived by his wife Judy of 60 years; children, Lee Ann Skinker (Ben), Dr. Robert F. Dundervill, III(Lisa) and Beth M. Ripa(Frank); 11 grandchildren and 2 great grandchildren and several nieces and nephews. He was predeceased by his parents, the three Newton brothers, Jim, Bill and Jack, and brother Walter Earl Dundervill. He will be interred at the United States Naval Academy columbarium with military honors at a later date.

Bob and 7 of his grandchildren