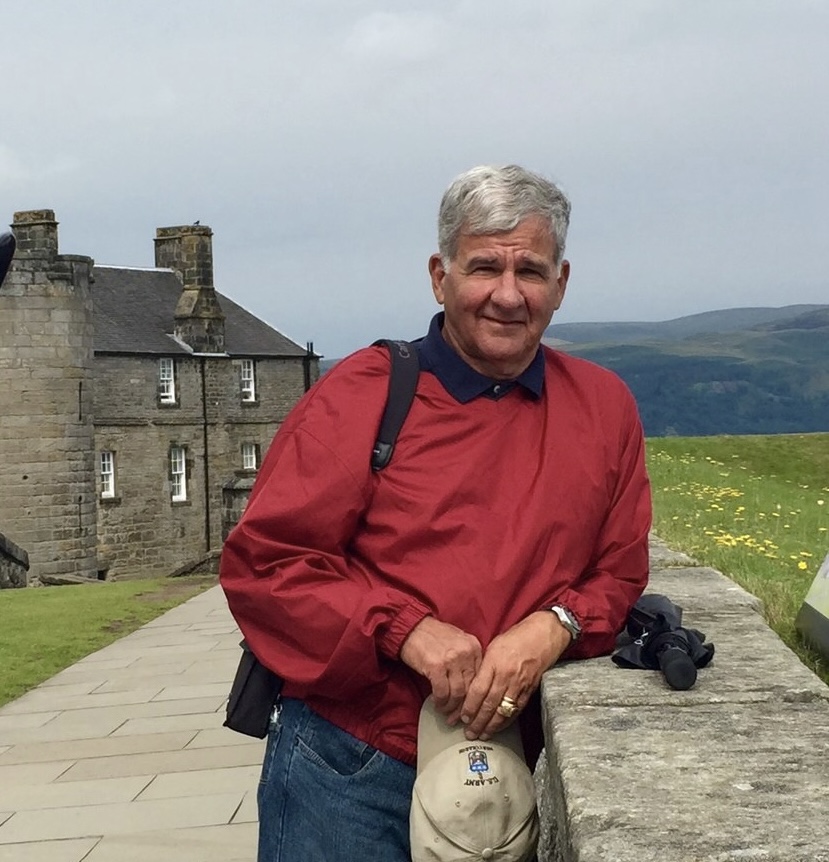 Date and time to be determined

Colonel Charles David McMillin, U.S. Army, Retired, died at his home in Virginia Beach on Wednesday, April 13. He was 76.

A towering intellect with a heart to match, he was often described as one that doesn’t suffer fools, but any fool could tell you, he suffered us just fine.

Loving husband to Marcie and beloved father to Jennifer and Dana, Colonel McMillin was known to his many friends as “David”, to his fellow Citadel alumni as “Blitz” and to his four doting grandchildren, as simply, “Papa”.

Born in Danville, IL he was the first child of Charles and Barbara McMillin, and brother to Xris, Jacqueline, and John. David was raised in a proud military family growing up in Okinawa and northern California before landing in Salisbury, MD where he was quarterback of his high school foot­ball team. Upon graduation in 1964 he attended The Citadel in Charleston, South Carolina. There he was assigned, by height, to Charlie Company where he forged lifelong friendships while honing leadership skills and a thirst for knowledge that became the cornerstones of his life.

After graduation in June 1968, David was commissioned as a Second Lieutenant into the U.S. Army Infantry and attended Airborne and Ranger Schools at Ft. Benning, GA before shipping out to Vietnam in August 1969. At Camp Eagle he was assigned to the 101st Airborne, 1st Battalion, 327th Infantry Regiment as a rifle platoon leader for an 18-month combat tour.

On a nine-day rest and recuperation trip to Hong Kong, a stroke of fortune put him on the Star Ferry, where he met a beautiful young flight attendant, Marcia Pickler of Anaheim, California. The two fell head over heels and were married in January 1971. It was a love story that stretched for fifty-one years.

David had a most distinguished Army career. He served two assignments with the 82nd Airborne Division at Fort Bragg, NC, and was selected as one of the initial officers to reconstitute the 2nd Ranger Battalion at Fort Lewis, WA. Following this tour, David was an exchange officer with the British Parachute Regiment in England, where he and Marcie represented the U.S. Army and America in outstanding fashion. Upon promotion to Lieutenant Colonel, David commanded the 1st Battalion, 9th Infantry Regiment in Korea with service on the Demilitarized Zone between North and South Korea. Later, he played a significant role as the Executive Assistant to the Commander, Special Operations Command at MacDill AFB before returning to Fort Bragg, NC where he completed his career in XVIII Airborne Corps Operations.

Retiring with honors in 1995 as a Colonel of Infantry, David accepted a position in Suffolk, VA with Northrop Grumman as a senior level manager for the Defense contractor team supporting Joint Forces Command, Norfolk, VA. David also served as a guest instructor at the US Army War College in Carlisle, Pennsylvania.

In retirement, David and Marcie’s family expanded, adding two son-in-laws: Joel Geiger and Jeff Brick, and four grandchildren: Blaine, Ellora, Revelle, and Edward. A loving, smitten grandfather, David was a fixture in their lives. He attended sporting events and band recitals and demanded book reports from “assigned reading” (that he himself assigned). He cooked delicious meals on holidays and other days between. He comically improvised his way through a yearly rendition of “Twas the Night Before Christmas” and hosted the family for annual beach vacations on the Isle of Palms, SC. During those long summer days, he would while away afternoons with a tome of military history under his nose, and in the evenings with gin and tonic in hand and Jimmy Buffet on the radio, he held court for all those lucky enough to be in his sway.

As a beautiful coda to a life spent in service, David’s eldest grandchild, Charles Blaine Geiger, followed his path to The Citadel where he is thriving. Seeing the school pride and traditions passed to a new generation brought David unfathomable joy, and he and Marcie returned often for home football games and to help shepherd Blaine through his first two years.

A celebration of life is planned this June with full burial honors to be bestowed at Arlington National Cemetery at a date to be determined. In lieu of flowers, the family asks that donations be made to:

Miss Dave at the gym. As a fellow Army officer, we had a special connection. He was a real gentleman.
Dave Brown

I met Dave in the 2nd Ranger Battalion. He was several years my senior. He was smart, funny, strong, and organized; he knew what had to be done, and made sure it got done–to standard, and on time; he was well read and his reasoning was as powerful as his presence. Right from the first time we met, I knew he was the real deal and I wanted to be like him. Then I met Marci. Realized she was the real deal, and Dave was just keeping up. Miss you, Dave. Thanks for your encouragement and leadership. Rangers Lead the Way.

Dave’s death to me with a major shock..we played football and basketball together in Salisbury . I consider Dave as a very great friend and truly enjoyed our time playing sports. Dave left us far too early and I still can’t believe he passed. I didn’t know his wife or children but I want them to know they are certainly in our prayers..

I first came to know about David when my son announced that he and his daughter, Dana, were dating. We found out that he was an infantry officer in the United States Army and that he was a Vietnam veteran. Also, he was Airborne and Ranger qualified. That right there gave him a lot of credibility with me! While I never served with him, those who did, both officers and NCOs, regarded him as a highly competent, caring, and compassionate leader.

After Joel and Dana were married, we spent many Christmas holidays with the McMillins and their extended family at their home in Virginia Beach. It was on these occasions that we got better acquainted with David and Marcie. They were consummate hosts making us feel like valued members of the family. It was also during these visits that I got to know Dave to be a soft-spoken, intelligent, articulate man who could engage in lengthy discussions on various topics. While we may not have always been in agreement, he could see both sides of an issue and could support his opinions and views very well, which provoked thoughtfulness without intimidation; a rare talent these days!

Among his many talents was his culinary skill; he was a fantastic cook! I think he would have earned praise from Chef Ramsey. His specialty was Beef Wellington; it was always a special occasion eating at Chez David’s no matter what was on the menu!

One of the things we were so impressed with was how he came to love and embrace Joel as the son he never had. While we didn’t have a daughter, I’m fairly certain that I would have been of the opinion that no man she would have wanted to marry would be worthy of her. If David ever felt this way about Joel marrying his little girl, you would never know it. Though it took some time, their affection and mutual respect for each other grew and one could tell there was a special bond between them.

David really stepped up his game, when Charles Blaine, his first grandchild was born. This rough, tough warrior became a doting, mentoring grandfather to both Blaine and Ellora. Attending athletic events, band concerts, and arranging family vacations were the norm. He was singularly influential in encouraging Blaine to consider and apply to his beloved college alma mater, “The Citadel.” Once accepted, David continued to offer his advice, guidance, and financial support. It breaks my heart to know that David won’t be able to see Blaine graduate and have Blaine render his first salute as a lieutenant to him…then again, I suspect he will be watching.

There is never a good time for men of David’s caliber to depart this world, but there can be no doubt that he made the world a better place, or that it will be the poorer for his leaving so soon. We all will miss him, but he would want us to “Charlie Mike”…continue mission. Rest easy, Sir, we got this! Airborne!