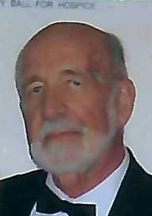 Clayton Soinger, 86, went to his heavenly home on Wednesday, January 12, 2022.  He was a beloved brother, father, grandfather, friend, and a Christian.
Clayton was born April 12, 1935 to the late Frank Soinger and Lois Raab.  After serving in the Navy for a bit of time where he worked on the naval ships as an electrician, Clayton then worked for General Motors for 31 years where he worked in digit electronics until he truly retired.  Throughout his life, Clayton used his Navy military experience to build model ships as his home was filled with replicas of famous wooden tall ships.  Clayton was also known for his incredible ballroom dancing skills and his masterful way of solving crossword puzzles.  Prior to moving to Virginia, he was an avid member of the Ocala Dance Club.  Clayton was a very kind and generous person as he frequently gave to the following organizations: Tunnel for Towers, ASPCA, Wounded Warriors, American Legion and Veterans for Foreign Affairs.
Clayton is survived by his sister, Donna Soinger Rumpler, stepchildren Kevin Cunningham (daughter Caitlyn), Colleen Cunningham, Pat Cunningham (wife Ashley and children Summer and Shauna), Shane Cunningham (son Kody), Timmy Cunningham (wife Angie and children Dylan and Reagan), Shannon Sharder (son Daniel), Brendan Wulf (daughters Selena and Catriona), and his beloved pets, dog Chanel and parrot Echo.  Clayton is predeceased by his first wife Jane and committed partner of over 15 years Sloane.
A celebration of life will take place at LunaSea, 206 22nd Street, Virginia Beach, VA, 23451, on Sunday, February 6, 2022 between 1:00 pm till 3:00 pm.
In lieu of flowers, a memorial donation can be made in Clayton’s memory to the Wounded Warrior Project.

May your memories of Clayton Soinger, give you peace, comfort and strength…