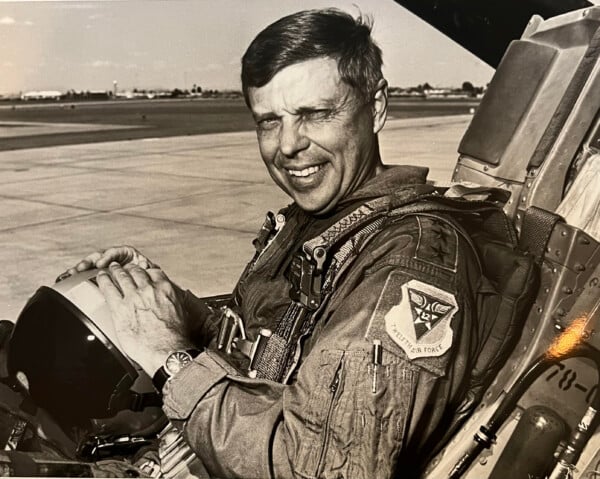 Lieutenant General Charles J. Cunningham Jr. passed away on 17 November 2022 at the age of 90 surrounded by friends and family following a short illness at his home in Virginia Beach. His life exemplified one of love, service and dedication to his faith, family, friends and nation.

Lt Gen Cunningham entered the Air Force through the aviation cadet program in June 1954 at Harlingen Air Force Base for navigator training. Upon receiving his wings, he was commissioned a second lieutenant and was assigned to various bases where he flew the C-124 Globemaster II. In 1957 he took time off to marry the love of his life, Letitia Delores Tamburino, at the Little Flower Catholic Church in Coral Cables, Florida. A family of six children and many assignment driven moves soon followed, including predawn departures, road map reading instruction for his little “navigators”, and memorable roadside picnics.

The general continued his lifelong military calling and love affair with flying when he entered pilot training in 1959. From there, he began his piloting career as an instructor at Vance Air Force Base. In June 1965, he was assigned to Luke Air Force Base for F-100 training. In 1965, Chuck transferred to Hahn Air Base, Germany, where he served as a squadron pilot and flight commander.

Chuck was subsequently qualified in the F-4 Phantom and in 1967, he joined the 389th Tactical Fighter Squadron at Da Nang Air Base in Vietnam. After completing 100 missions over North Vietnam, he was assigned to Headquarters 7th Air Force at Tan Son Nhut Air Base as the F-4 combat tactics officer, and continued to fly combat missions until 1968.

Upon conclusion of his first combat tour, Chuck was assigned to the U.S. Air Force Academy, where he served as an Air Officer Commanding and member of the commandant’s staff in the Airmanship Division under Brig General Robin Olds.

In 1970, he was assigned to fighter operations at Holloman Air Force Base and returned to combat operations in 1971 as commander of the 480th Tactical Fighter Squadron at Phu Cat Air Base, Vietnam. He completed his second tour of duty in 1972, bringing his total number of combat missions to 366.

Following graduation from the Army War College, he was assigned to Headquarters U.S. Air Force as executive assistant to the undersecretary of the Air Force. Following that assignment, Chuck went on to command the 56th Tactical Fighter Wing, at MacDill Air Force Base in Florida.

In addition to the F-100 and F-4, the general was also qualified in the F-15, F-16 and the prototype F-20 Tigershark. When he retired from the Air Force in 1987, he had more than 6,000 flying hours.  His flying did not stop however, and he logged many more hours enjoying his Stearman and Piper Cub aircraft.

Following his Air Force retirement, Chuck’s many career accomplishments continued in both the public and private sectors, including Director Defense Security Service and executive positions within the Office of the Secretary of Defense and the Defense Intelligence Agency. He culminated his long and distinguished career as a professor at the Joint Forces Staff College in Norfolk, where he was inducted into the schools Hall of Fame in 2022 following his retirement in 2017.

Chuck was predeceased by his loving and devoted wife of 60 years, Tish, and their third child Christine. He is survived by five children: Patricia LaForge (Phil), Mary Balog (Mike), Charles III (Melani), John Michael (Jim), Timothy (Mindy) and his brother Phil (Margaret), along with ten grandchildren and two great-grandchildren.

The family will receive friends on 7 December from 5-8pm at Altmeyer Funeral Home Southside Chapel on Rouse Dr in Virginia Beach.  A Mass of Christian Burial will be held at Blessed Sacrament Catholic Church in Norfolk the following day, 8 December at 10:30 AM. Following a short reception, burial with full military honors will take place at the Albert G. Horton Jr. Memorial Veterans Cemetery in Suffolk.

I met general Cunningham in 2009 at the Joint forces Staff college. He was a generous man who cared greatly about people and the Staff college. He is a national treasure and I consider myself very blessed to have had the opportunity to work with him and to call him my friend.

I served as a cadet under then, Major Chuck Cunningham at the Air Force Academy in 1969. A great officer and great person who you just knew would be a success in everything he was involved with. It was an honor even then to be under his guidance. Loved Tish, and the kids, too.

May your memories of Lieutenant General Charles J. Cunningham Jr., give you peace, comfort and strength…

Cunningham family, condolences from the Sharon family as we lost Denny last month and celebrated his life earlier today. Chuck was a great officer and a gentleman and even at my young age when we served/lived together at MacDill AFB I knew he was someone to be looked up to an emulated.

I was also delighted to read that he was an Army War College grad (I’m class of 2012) and look forward to finding his class plaque on my next visit to Carlisle Barracks.

Remarkable leader, mentor, gentleman and Christian. He deeply will be missed.