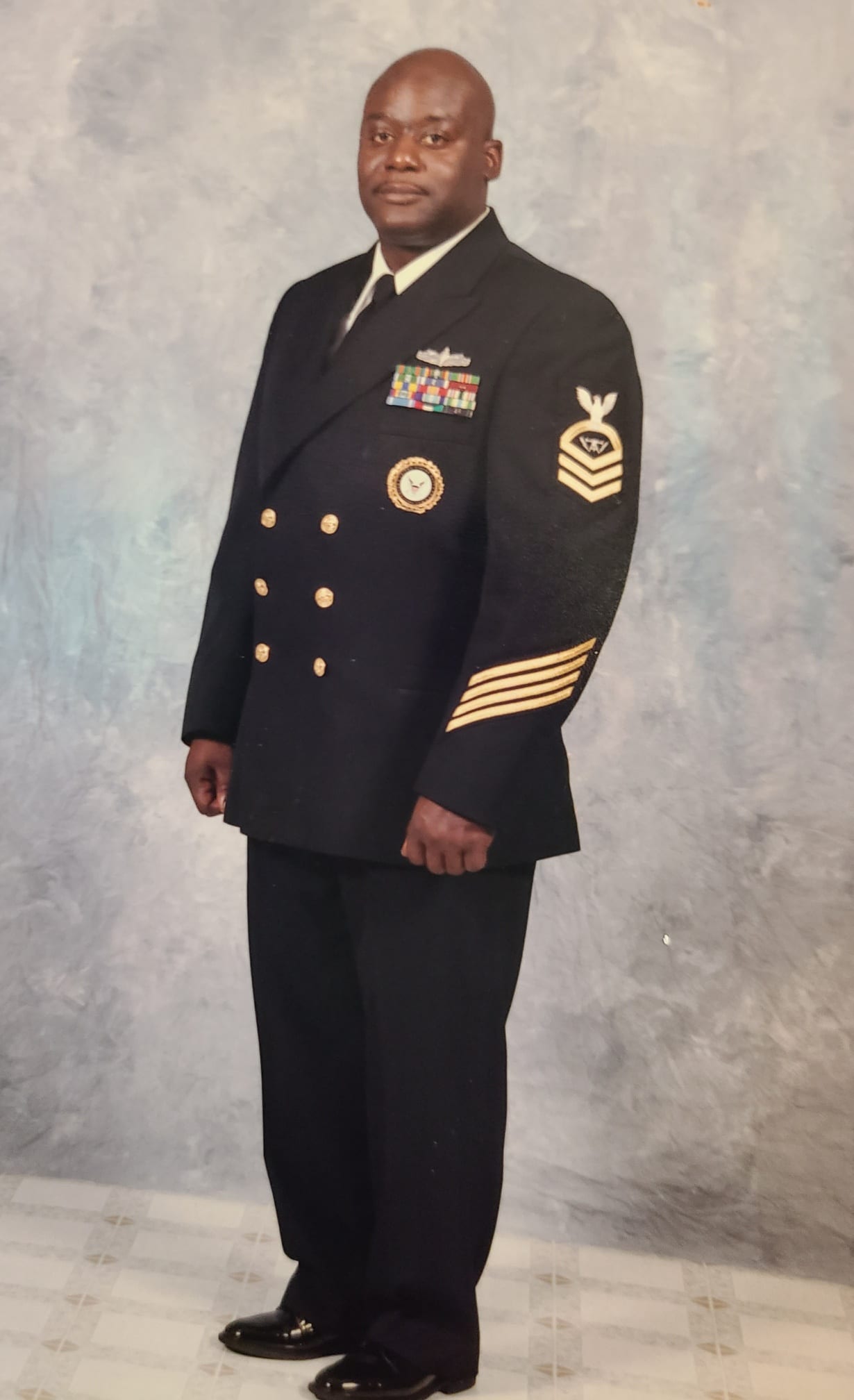 Charles E. Smith, Jr. passed away December 3, 2020 in Virginia Beach, Virginia.  Charles was born August 18, 1965 to Charles and Brendolyn Smith. He was a graduate of Kendrick High School in Columbus, Georgia. After graduating high school, Charles went to basic training for the United States Navy, attending in Great Lakes, Illinois.  He continued his Navy career for 24 years as a Fire Controlman and retired at the rank of Chief.
After his retirement, he spent a period working for the City of Virginia Beach before deciding he’d rather be sitting on a pier fishing.  Charles enjoyed boating, fishing, working on cars, grilling out and playing Texas Hold ‘Em.  Charles was also a very big, strong family man, and believed in spending time enjoying life with his family and friends.  Many times, he would grill almost everything in the freezer to ensure everybody had some good food to eat.  His spareribs were finger licking good! His friends knew him as mean griller. But he also enjoyed playing bartender at gatherings. Charles enjoyed working on mixing the perfect margarita.
Another thing Charles loved were his movies! There wasn’t a Marvel movie he didn’t want to see. Even after his stroke, Charles watched Star Trek, Star Wars and Marvel movies every day.  But this was not the reason he earned the nick name “Ironman.” It was Charles ability to problem solve and fix almost everything.  When any thing broke, he studied it, and found away to have it work again.  Cars, bicycles, electronic, plumbing, etc. nothing stopped him from solving the problem. Always up for a challenge you could say, if there was a way, he found it. Charles also was a great friend.  He helped anybody who asked, even if he didn’t know them that well.
Charles met his second wife Barbara while assigned as a Navy Recruiter in Atlanta, Georgia in 1998.  Both had been previously married and passed their childbearing age.  They spent the next 22 years traveling, fishing, laughing and getting the most out of life.  Charles became Dad to her children, and Papa to the grandchildren who he was present for each of their births. Although estranged for a while from his biological daughter, Charles took every opportunity to stay active in her life.  Family was important to Charles, and he was not only a great husband, but a fantastic dad and grandfather.
Charles was preceded in his death by his father.  Left to cherish his memory are his wife Barbara; three children Latisha, Stephanie and Clarice; granddaughters Kristhinna and Lauren and grandson Kameren; mother Brendolyn; sister Shirley; nephews Quinton and Justin and niece Angelica.  Additionally, his aunts Gwendolyn, Dorothy and Ola (Ralph); and uncle Felton and a host of cousins and loving friends.
Visitation will be held from 12:30 pm to 2:30 pm on Saturday, December 19, 2020 at Altmeyer Funeral Home, 5033 Rouse Road, Virginia Beach. A blended service of both Buddhist and Christian faiths will commence at 2:30 pm at the same location.  Masks are required for attendance, as well as for visitation of all guests.  Grave side service will take place at Arlington National Cemetery at a later date to be determined.

To view this service live, please click HERE
*Should there be any technical difficulties, this service will be posted at this same site shortly thereafter.*

wonderful man. Charles had and awesome sence of humor. we didn’t know him long. but feel very blessed to have him as our friend.

I met Charles over 30 years ago at Dam neck base when he was just starting his military career. He became friends with me and my husband and this is when he met his first wife Myrna. He had a great relationship with my husband as they shared military stories from their duties stations.Once his daughter Clarice came into his life, we would see him more and more because he was a proud father. My friend will be missed and I’m glad he’s in a better place and at peace.

Mt. Trashmore is how I got to know Smitty. I definitely saw him in action when he had a grill off with one of his best friends Rece house. I have to say his ribs were awesome. The love he had for his pit bull was enormous….along with tricks he taught him. Smitty always was personable to those he met at the park and co-workers. He definitely will be missed. Prayers and condolences to the family

May your memories of Charles E. Smith, Jr., give you peace, comfort and strength…

Charles was a loving and very funny man. He would help anyone and gave the best bear hugs! I will miss him. Rest in peace Charles. I know you will always be around for those you loved!

Charles was a great man He will be greatly missed

He always had a smile On his face. Always willing to help others. So sorry he left this earth way too soon