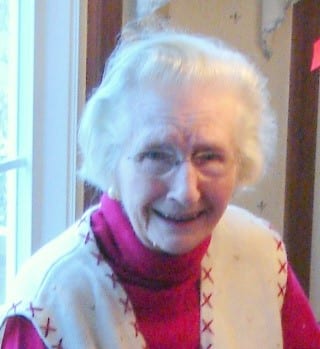 Beloved wife and mother Cathryn “Babe” Mitchell, 94, passed away on June 9, 2015, following complications from a stroke. She was born Cathryn Sue Oakes to the late Annie May and James Boyd Oakes of Danville, Va. She attended Stratford College and worked with War Department records in Washington D.C. during WWII. She really was quite a  “Babe”  during this time who dated  Tom Poston before he became an Emmy Award winning actor.  After the war, she settled permanently in Newport News where she enjoyed family life, bridge, dogs, arts and crafts. Cathryn was preceded in death by husband William Mitchell, brother Hamilton Oakes and sister Gretchen Eanes. She is survived by son William Mitchell Jr., daughter Jeanne Brobst, son-in-law Douglas Brobst, granddaughter Koren Woolard and her husband Kyle, great-granddaughter Maxie, and many other relatives and friends. Services will be private, and in lieu of flowers, memorial contributions may be directed to the charity of your choice.