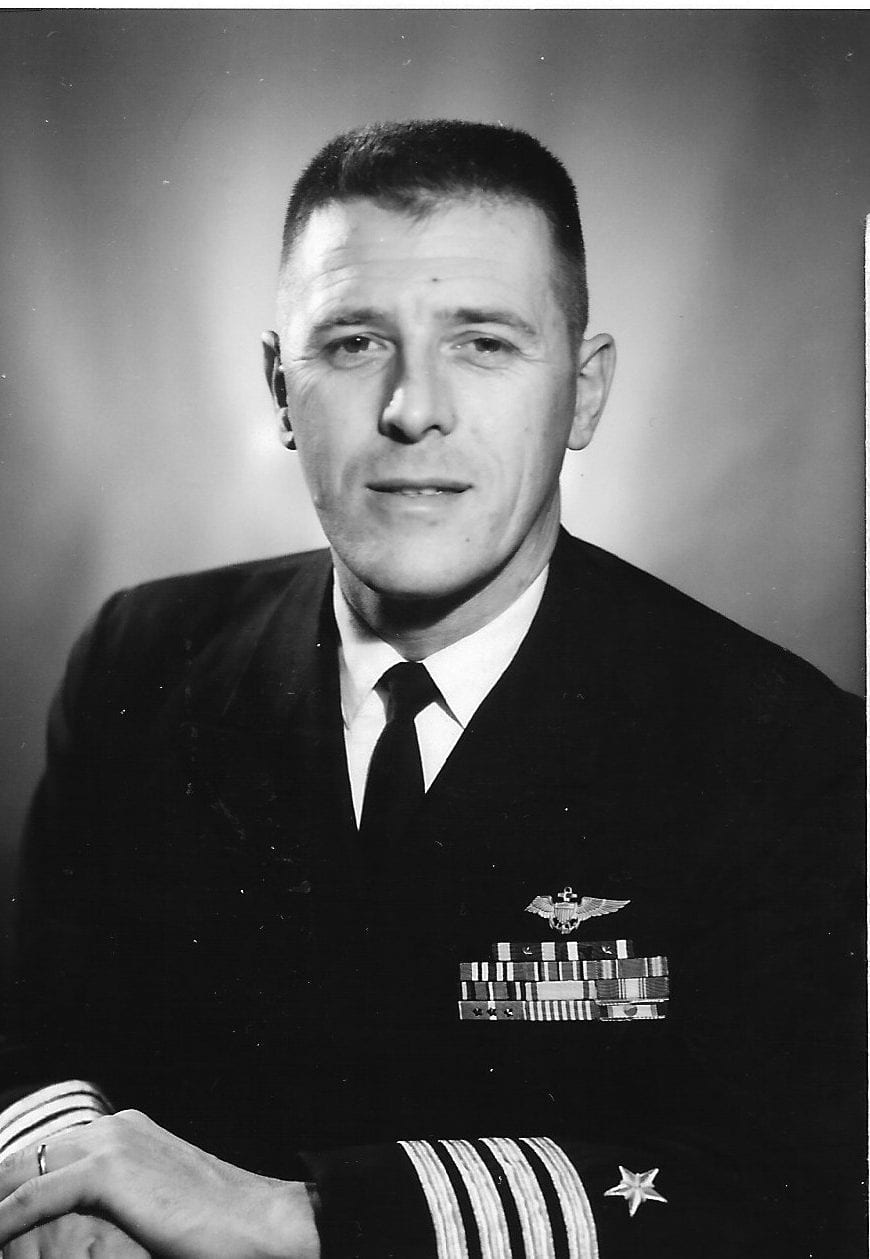 Captain Charles M. “Chuck” Woodworth, USN (Ret.) August 11, 1925 – February 14, 2017 (age 91) Captain Charles “Chuck” M. Woodworth, USN (retired), of Norfolk passed away peacefully on February 14, 2017. Born in Hastings, Nebraska, the son of Wilsey and Ruth (Nelson) Woodworth, he is a graduate of the University of Nebraska, Rice University and the Naval War College. Captain Woodworth served honorably in the United States Navy for 34 years. He served as a Cadet in officer training during WWII before being commissioned as an Ensign in 1949. After flight training in Pensacola, Fla., he served as a carrier-based fighter pilot flying the F-4U Corsair to the A-3 Skywarrior and other duties aboard the USS Forrestal, USS Ranger, USS Midway, and the USS Little Rock COMSIXTHFLT among others. He was a flight instructor in Corpus Christi, Texas and with JSTPS, Offutt AFB, Nebraska. He also served as a strike operation officer, staff nuclear weapons officer and nuclear engineer. A Korean and Vietnam War veteran, his last active duty assignment was at the Pentagon with the Joint Chiefs of Staff (SAGA). His military awards and decorations include the Legion of Merit, Air Medal with Bronze Star, Navy Achievement medal, Navy Commendation Medal with Combat Device, Joint Service Commendation Medal, Korea PVC, WWII Victory Medal, American Theater Medal, Korean Service, Korean Theater, China Service, Air Forces Expeditionary Medal. After retirement, he continued to reside in Alexandria, Va., where he worked for Planning Research Corporation (PRC), heading the implementation of the Saudi Naval defense system and working with NASA until second retirement and later moving to Norfolk. He was a life member of the Military Officers Association of America (MOAA).
He is survived by his loving wife of 67 years, Frances “Bunny” (Terry) Woodworth; daughter, Terry Woodworth and husband, Buck Rodgers; son, Charles M. Woodworth, Jr. and wife, Elizabeth; daughter Susan Oberg and husband, Owen; daughter Nancy Carr and husband, Kevin; son Michael; sister-in-law, Ann Woodworth; four grandchildren, Heather, Erin, Lucy and Travis and great-granddaughter, Hadley. Predeceased by his sister, Jeanne and brother, Jim. In lieu of flowers, memorial contributions may be made to The Union Mission Ministries, Norfolk Va. at www.unionmissionministries.org. Internment to be at Arlington National Cemetery at a later date.

My Captain my Captain, I could stay up all night listening to your stories. Some were an insight to just what it took to be a Naval Aviator! Other stories were subtle and not so subtle stories about what it took to be a man, a husband, and a father. You were never afraid to talk about your mistakes, you were always humble in recounting your amazing military career, and I was always honored to be your son in law. I can only hope to adapt overcome and evolve as you did in the process of pressing on to the mark and crossing the bar.

Never met you… But you’re my neighbor… My elder… And served our great nation and as a Marine I have to say farewell…. FAIR WINDS AMD FOLLOWING SEAS Captain. Semper!

I have the watch from here on out sir. Rest well.

Please accept our condolences for the loss of Charlie. “Fair Winds and Following Seas”

I am so sorry to hear about your loss. May the God of all comfort strengthen you at this most difficult time 2 Corinthians 1:3,4. Please accept my sincere condolences