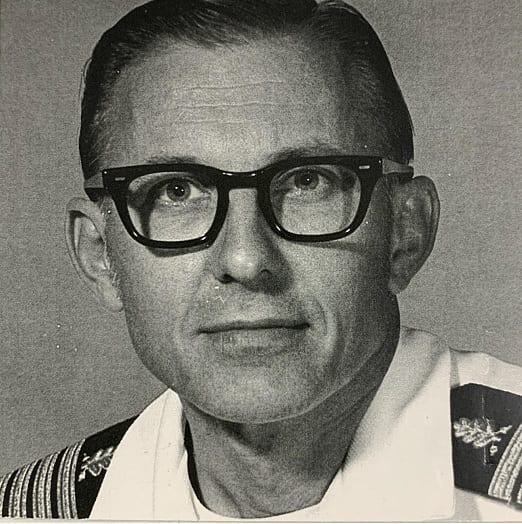 A memorial service will be held at a later date.

CAPT Cameron A. Lowe, Dental Corps, USN (Ret)
Cameron A. Lowe of Virginia Beach, VA, age 87, dentist, endodontist, Naval officer, and educator, passed away on July 17, 2020.  He was predeceased by his dear wife Doris, his parents Emma Louise (Anderson) Lowe and Governor Richard Barrett Lowe, and his brother Bruce.
He is survived by his three children; Barrett (Betsy), Steven (Susan) and Leslie (Michael Brunick); by his six adored grandchildren, Jay Lowe and his wife Stacy, Molly Lowe, Eliza Lowe, Bennett Lowe, Cameron Brunick and Anna Brunick.
He was born in Alcester, South Dakota on December 19, 1932.  His boyhood was spent in the Midwest, but he completed high school in Alexandria, VA.  He attended George Washington University for two years prior to enlisted service as a Navy Hospital Corpsman (Dental) during the Korean Conflict.  Returning to school under the G.I. Bill, he completed his pre-dental requirements at the University of Virginia.  He then entered the School of Dentistry at Georgetown University in 1956.   While in school, he met his wife Doris Franquez, and they were married in December 1957.  Upon graduation and the awarding of the Doctor of Dental Surgery (DDS) degree in 1960, he was commissioned a Lieutenant Junior Grade in the U.S. Navy Dental Corps.  He completed his endodontic residency at the Portsmouth Naval Hospital in 1969 and was board qualified in 1972.
He served for over 28 years in the U.S. Navy on both active duty and in the reserves, rising in rank from Seaman to Captain.  He served in many positions ashore and afloat, to include Navy Mobile Construction Battalion 8, the commissioning crew of the aircraft carrier USS America (CVA-66), and the recommissioning crew of communications ship USS Arlington (AGMR-2).  His overseas assignments included tours in Cuba, French Morocco, Puerto Rico, the Caribbean Sea Frontier, and Guam.  Dr. Lowe was medically retired as a Captain in 1978.
Subsequently, Dr. Lowe practiced endodontics privately, and then served as an Adjunct Assistant Clinical Professor of Endodontics at Virginia Commonwealth University – Medical College of Virginia School of Dentistry from 1979-1981.  He joined the faculty at Old Dominion University as an Associate Professor in 1982 with teaching responsibilities in oral anatomy and histology, oral pathology, dental pharmacology, and dental science.  At the time of his second retirement in 1992, Dr. Lowe was the Assistant Chairman of the School of Dental Hygiene and Dental Assisting in the College of Health Sciences at Old Dominion, and was awarded the title of Associate Professor Emeritus.
Throughout his life Dr. Lowe was active in many civic and church organizations.  He was an usher and parish committee chairman at Navy chapels on the bases where he was stationed, and at Baylake United Methodist Church in Virginia Beach. He served as an adult Boy Scout leader in Guam and Virginia Beach; was a tutor for adult literacy at the Adult Learning Center, and was a Neighborhood Watch Coordinator and Block Captain.  He was an avid tennis player for many years, and since 1992 was a regular in the morning with the “old retired crew” at the Naval Amphibious Base Little Creek gymnasium.
His membership in professional organizations included the American Association of Endodontics, the Virginia State Academy of Endodontics, the U.S. Navy Association of Endodontics, the American Academy of Oral Medicine, the Association of Military Surgeons of the United States, and the Peninsula Dental Society of the American Dental Association.
His honorary and fraternal organizations included Sigma Alpha Epsilon, the Delta Sigma Delta Dental fraternity, the Sigma Phi Alpha honor society, as well as a life member of the Veterans of Foreign Wars, Disabled American Veterans, and the Military Officers Association of America.
Dr. Lowe’s biography has over the years appeared in Who’s Who in the South, Who’s Who in Medicine and Healthcare, and Who’s Who in America.
His finest accomplishments were his marriage to his lovely and talented wife Doris, and their three wonderful children, their spouses, and six beautiful grandchildren. He was especially honored to love and be loved by them all.
Memorial donations in remembrance of Dr. Lowe may be made to the American Diabetes Association, P.O. Box 15829, Arlington, VA  22215 or by phone at: 1-800-DIABETES (1-800-342-2383) or on the web at:  https://www.diabetes.org/ways-to-give
“Fair winds and following seas.”
“It seems to me most strange that men should fear, seeing that death, a necessary end, will come when it will come.”

So very sorry for your loss. Praying God comforts and strengthens you during this time of transition.