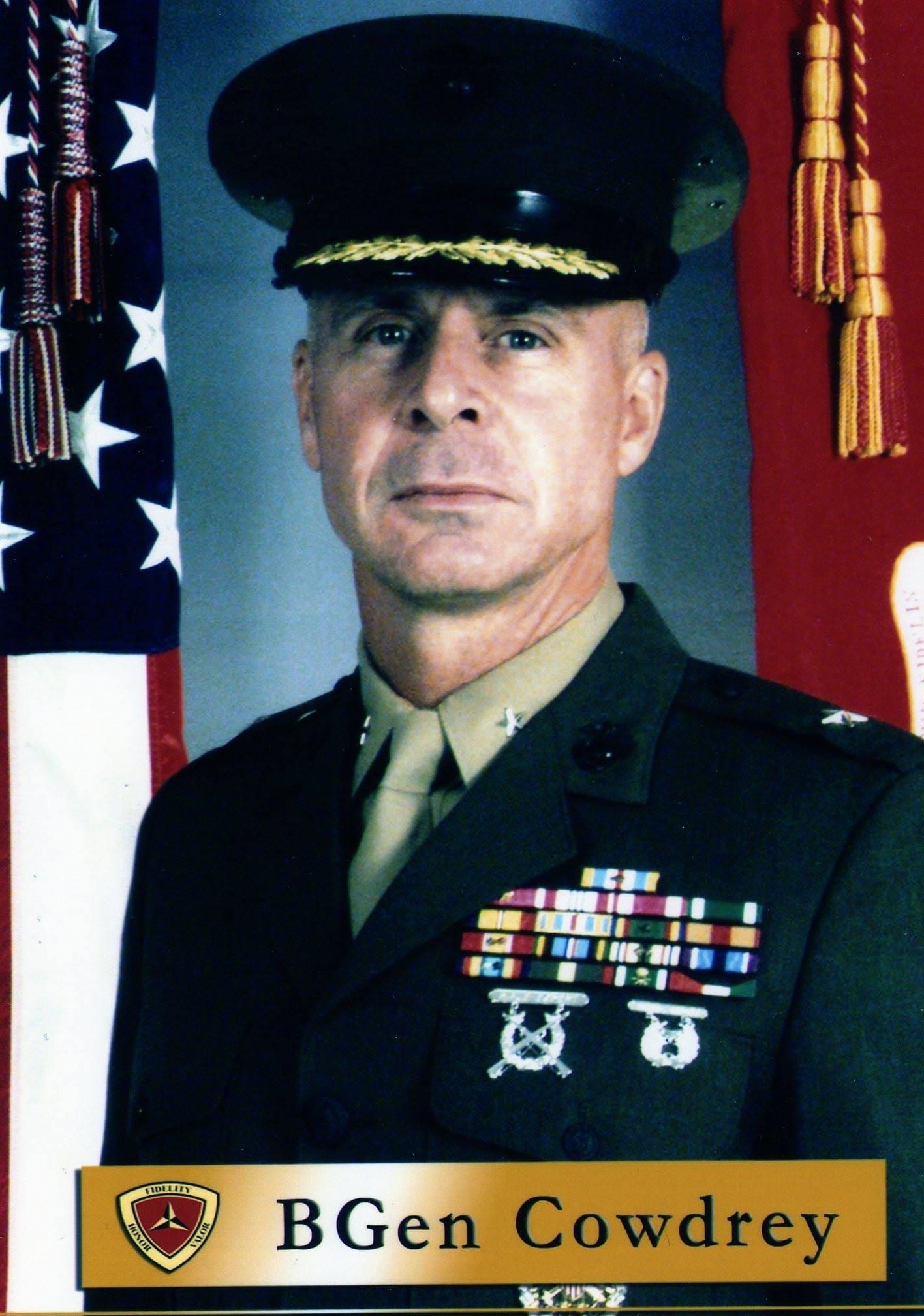 Brigadier General Christian B. Cowdrey, USMC (Retired), 70, of Norfolk, VA, beloved husband, father and grandfather passed away after a brave 5.5 year battle with Glioblastoma on Monday, June 29, 2020, at his home in East Beach. Born on November 1, 1949, in New London, Connecticut, to CAPT Roy B. Cowdrey, Sr., USN (retired), and Annette B. Cowdrey.  Following graduation from Arundel High School he enlisted in the U.S. Navy, then attended the U.S. Naval Academy Preparatory School (NAPS) in 1968.  Following a year at NAPS, he received a football scholarship to the University of Maryland, College Park, where he was defensive captain of the varsity football team in 1972.  He also lettered in Lacrosse.  Upon graduation from the University of Maryland, he attended Officer Candidate School and was commissioned a second lieutenant in the U.S. Marine Corps in 1974.  Christian married his college sweetheart, Donna M. Falcone, of Hyattsville, MD in 1974 and they were blessed with three beautiful children, Christian, Lauran and Lindsay.
As an infantry officer, General Cowdrey served as a rifle and mortar platoon commander in 1st and 3rd Battalions 5th Marines.  After two years as the Combat Cargo Officer on USS Ponce (LPD-15), he was assigned as Commanding Officer Charlie Company 1st Battalion, 8th Marines, including a combat deployment to Beirut, Lebanon, 1982-1984.  He served in Operation Desert Storm with the 3rd Marine Aircraft Wing and in Mogadishu, Somalia, with the 1st Marine Division.  He attended the U.S.  Army Advanced Operational Art Studies Fellowship and received a Master of Military Arts and Science degree, Ft. Leavenworth, KS.  As a Colonel, he served as the Director of the Tactical Training Exercise Control Group and commanded the 7th Marine Regiment in 29 Palms, CA.  He was promoted to brigadier general in 2001.  General Cowdrey served as the Commanding General of Combined Joint/Task Force Consequence Management during Operation Enduring Freedom and Deputy Director Operations, C-3 Coalition Forces Land Component Command, Central Command during Operation Iraqi Freedom.  General Cowdrey went on to command the Marine Air/Ground Task Force Training Command, Marine Corps Air Ground Combat Center in 29 Palms, CA.  In his final assignment, General Cowdrey commanded the 3D Marine Division where he led the tsunami relief efforts in Banda Aceh, Indonesia, 2004.
General Cowdrey retired from the U.S. Marine Corps in 2006 and settled in Norfolk at the age of 56 with his devoted wife, Donna. He continued his career as a Vice President of ITA International for eight years and retired fully in 2014.  Together, General Cowdrey and Donna enjoyed their retirement years in the East Beach community of Norfolk, VA. In addition to spending time with family and friends, he loved spending a day at the beach, surfing, sailing, exercising, and gardening.  Christian is survived by his wife and the love of his life, Donna M. Falcone of 46 years; three children, Christian B. Cowdrey II (Lieutenant, USN 1998-2005), wife Ann; Lauran M. Morrison, husband Major Stewart A. Morrison, USANG; Lindsay M. Cole, husband Commander Cory W. Cole, USNR; three brothers, Roy B. Cowdrey, Jr., Esq., wife Dael; Charles S. Cowdrey, wife Joan; and Daniel W. Cowdrey (Captain, USMC, 1984-1996), wife Maggie; and six grandchildren, Blake C. Cole; Connor L. Morrison; Luke M. Cole; Lucy M. Morrison; Gia M. Cole; and Asha M. Cowdrey. He was preceded in death by his father, CAPT Roy B. Cowdrey, Sr., USN (retired); sister, Suzanne B. Cowdrey; nephew, Matthew B. Cowdrey; nephew Michael Sean Fischbeck and great niece Mary Marie Fischbeck.
A private Mass of Christian Burial will be held at Holy Trinity Catholic Church on Friday, July 3, at 11am, with live-streaming provided for family and friends.  Visitation will be open to family and friends on Friday, July 3, from 4pm to 6pm, at Altmeyer Funeral Home, 5033 Rouse Drive, Virginia Beach, VA 23462. A private interment will take place at Arlington National Cemetery at later date.  In lieu of flowers, donations may be made to the Semper Fi Fund, https://semperfifund.org/donate/, or The King’s Daughters East Beach Circle to benefit Children’s Hospital of The King’s Daughters (CHKD), https://www.kingsdaughters.org/ways-to-give/donate/  or mail to The King’s Daughters Office, CHKD, 601 Children’s Lane, Norfolk, VA 23507.
Condolences may be left online at www.altmeyerfh.com

I was thinking about my classmates from Command & Staff yesterday and was extremely saddened to just discover that Chris left us so soon. As a geographic bachelor, I can’t tell you how much I appreciated your family’s hospitality on more than one occasion and, despite your husband’s objections to the contrary, your showing me the the TV tape featuring him as an outstanding football player.

Please forgive me for my oversight and know that you are both special people to me. May the Lord continue to comfort you and your family.

I just thought of BGen Cowdrey today and am so sorry to read of his passing. I served with him as his Admin Chief at 29 Palms on my final tour. He was without a doubt one of the most honorable people I have known in my life. Since I was on my twilight tour (and somewhat of a jokester) he may not have known at the time how much I personally respected him as a Marine General, a man, and as a person, but I did. He is not forgotten.

Chris and I played left and right defensive ends at NAPS. He always had my back.

I went through OCS, TBS with Chris and was in the 1st Marine Division together (he infantry and I artillery) for our first FMF assignments. My wife and I hung out with Chris and Donna all through those times and our first children were born at Camp Pendleton. We lost touch after I retired in 1992, but they stopped and visited with us on their way to Camp Pendleton in 2001 right after the events of 9/11 (he had just left the Pentagon for a new assignment with the 1st MarDiv). It was nice to see them, of course, and it was great to see them again. We were shocked and greatly saddened to learn of his passing recently and our hearts and prayers go out to Donna and the rest of their family. He was a true friend and brother in arms. Semper fi Marine.

My deepest & sincerest condolences, he was my company commander in Beirut Cco 1/8, 24th Mau. I’m glad to see he advanced to General, he was all marine, all the time. An excellent example. He truly lead by example. Made the God of heaven continue to provide peace and comfort, for you and your family. 2Cor 1:3,4 / Rev 21:3-5.

I was moving some books around in my library and saw “The Root” by Eric Hammel wherein (then) Capt Cowdrey is mentioned many times for his role during the bombing of the Marine barracks in Beirut, and I decided to see how he was doing in retirement. I am very saddened to hear of the passing of a great American warrior and gentleman. I was BGen Cowdrey’s Aide-deCamp when he was the ADC of 1st Marine Division. I am now retired after 22 years in the Corps, and I still fondly look back on my time in the White House at Camp Pendleton and of the time I spent with your husband, father, and grandpa. Rest easy sir, Semper Fidelis.

Dear Donna,
I want to express my deepest wish of commiseration in the passing of
your beloved Chris. He has passed from your arms into the arms of Jesus, knowing that faith in Him brings solace and certitude that you will be re-united
again. May God Bless you and keep you and your family.
Your cousin – Dan

Donna,
We have just learned of the passing of Chris. He certainly lived a life of God, Family and Country. What an outstanding man he was in every way imaginable. I only wish I could have known this man. Our deepest condolences to you and family Donna. God Bless you in the coming days. We will be in touch dear cousin.

Donna, My sincere condolences for the loss of a wonderful husband and father, and a true warrior. I was privileged to serve alongside Chris for 2 years in Okinawa. He was an oasis of sanity in an otherwise chaotic environment. I speak for all of his (and your) BGSOC friends in wishing you and your children the very best during this difficult time. We are here for you.