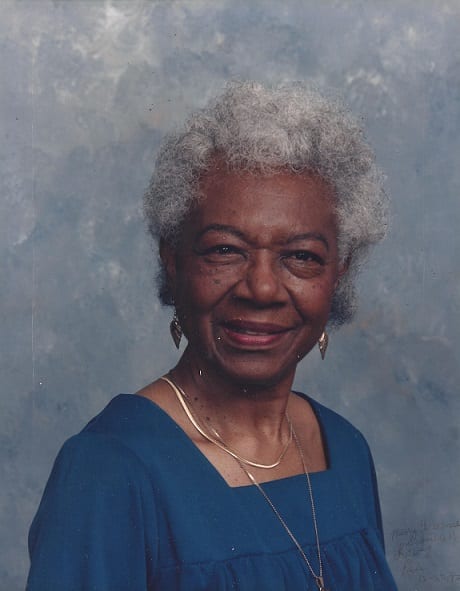 Azarie Salome Geathers Waters was born on May 3, 1927 to Rev. James Dozier Geathers and Salome (Wiley) Geathers in Orlando, Florida. When she was in elementary school, her mother relocated with her daughters to Valdosta, Georgia.
At age 16, she entered Paine College in Augusta, Georgia. After completing her bachelor’s degree, she moved to Columbus, Ohio to work on a masters degree at the Ohio State University.  Before finishing her studies, in late August 1948, she met Sidney Waters who was working toward a Master of Fine Arts.  On Thanksgiving of that year, they were engaged, and on December 26, 1948 they married at her home church, Macedonia Baptist Church in Valdosta.  The marriage endured until Sidney’s death in 1996.
She served as a school teacher in Columbus, Georgia and Bossier City, Louisiana in the first years of her professional life. After giving birth to two children, Paula and David, she continued her education while working for Norfolk Social Services.  In 1958, she received her Master of Social Work from Virginia Commonwealth University in Richmond, VA.  In the mid-1960s she served in the role of Visiting Teacher for the Norfolk City School Department and continued studying.  In 1988, at the age of 58, she was awarded a Ph.D in Education Administration from Virginia Polytechnic Institute.
She planned to become a consultant after taking early retirement at age 62; however, she pursued more opportunities to go to school as she audited courses at Old Dominion University. She focused her studies in music and art—voice, violin, piano, guitar, and ceramics.
Azarie Waters had many interests. She enjoyed sports—playing and watching.  Her favorite game was basketball, and she became an ardent supporter of ODU’s Women’s Basketball Team.  She was a community activist, best known for her fight to keep Crestwood High School open in the age of desegregation.  As a social worker, she knew how to use the “loopholes” so that her clients would be helped, rather than hindered by the social welfare system.  She was active in the PTA and the Crestwood Civic League.
Azarie Waters was a woman of faith. Not only did she talk and sing about her trust in Jesus Christ, she lived it.  While maintaining her membership in Macedonia Baptist Church, she served as a Sunday School teacher at Bank Street Baptist Church in Norfolk for many years.  What she taught, she practiced.
Music was important to her. She played piano, guitar and ukulele, and when she retired, she joined the Chesapeake Civic Chorus.
Azarie Waters loved to laugh and to cause laughter. She was hospitable; her home was always open to strangers.  Her life was full of joy which she generously shared with her friends, neighbors, and anyone she met.  On Febraury 16, 2016, she succumbed to a long battle with dementia. She will be missed, but she leaves behind many happy memories.
The bearers of her legacy are her daughter, Paula of Stafford, CT; her son, David (Rita) of Chesapeake, VA; her nephews, neices, clients, friends, and everyone she touched. She was preceded in death by her brothers, Coleman Brown and James Geathers, and by her sisters, Kathleen Geathers and Janie Bell Campbell.
A visitation will be held Monday, February 22, 2016 from 11am-12pm followed by a celebration of life in Shiloh Baptist Church, 745 Park Ave in Norfolk. Condolences may be offered to the family at www.altmeyerfh.com
Then I heard a voice from heaven say, “Write this: Blessed are the dead who die in the Lord from now on.” “Yes,” says the Spirit, “they will rest from their labor, for their deeds will follow them.”
Revelation 14:13

My deepest sympathy in the loss of Azarie. What a beautiful soul she was.

My deepest sympathy goes out to the family, friends, colleagues and neighbors on the passing of the beloved Azarie. She is sorely missed.