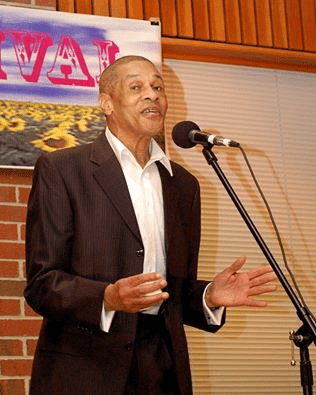 Arnold A. Bowie, Sr., age 79, died peacefully at home with his beloved wife by his side Thursday, September 3, 2015 after a long, hard fought illness. He is survived by his wife of 55 years, Glendya, his children: Shirell Bowie, Arnold Bowie, Jr. and Arnetta Cline (Donald Cline, Jr.) all of Virginia Beach. He also leaves behind four grandchildren, Kerran Bowie, Nicholas Keolker, Savannah Bowie and Joshua Cline, Brother-in-Laws Albert Williams (Amber Williams) and Roger Williams (Gayle Williams) two sister-in-laws Alivee Williams, Mary Helen Bowie and a host of nieces, nephews and friends. He was preceded in death by his parents Robert Lee Bowie and Lula Amanda Grevious, five brothers , one brother-in- law and three sisters. Loved by so many, he will be truly missed by his family and friends. Services will be held this Saturday, September 12, 2015 at Altmeyer Funeral Home, Southside Chapel, 5792 Greenwich Road, Virginia Beach, VA 23462. Visitation: 10:00 am to 12 noon, Service and Celebration 12 noon – 1:00 pm. Burial will be September 25, 2015 at Albert G. Horton Jr. Memorial Veterans Cemetery, 5310 Milners Road, Suffolk, VA 23434. Condolences can be made at www.altmeyer.com.

Daddy, I hope you are laughing and having a wonderful birthday. We miss you so much and love you even more!!! Happy Birthday Daddy!!

My heart overflows with love for you Daddy! I miss you!!

Missing you. In my heart forever!!

Love you, and will miss you very much. I know you are watching over us.

Please accept my deepest condolences on the death of your loved one. The death of a loved one can be traumatic for the family. However, remember the happy and fun times you shared with her. Remembering those times might be painful at first, but in time, these memories may help you to heal rather than cause you to hurt. Most importantly rely on God’s Word for comfort. Pray to God to help you get through this sad time. He will listen and give you the strength needed.

Glenda, Arnie was a wonderful man and will be missed, my heart goes out to you and the family, stay strong , you will make it through this, love Penny

I met Arnold so many years ago in Virginia when I visited your home to learn more about SGI and the wonderful practices of Buddhism. I am glad that he lived such a fulfilled life.

I met Arnold so many years ago in Virginia when I visited your home to learn more about SGI and the wonderful practices of Buddhism. I am glad that he lived such a fulfilled life.

Arnold Bowie Was A Man Everyone Looked To. For He Was Likeable Because Of Kind And Caring Heart. Am Going To Miss You Man! Peace And Love!